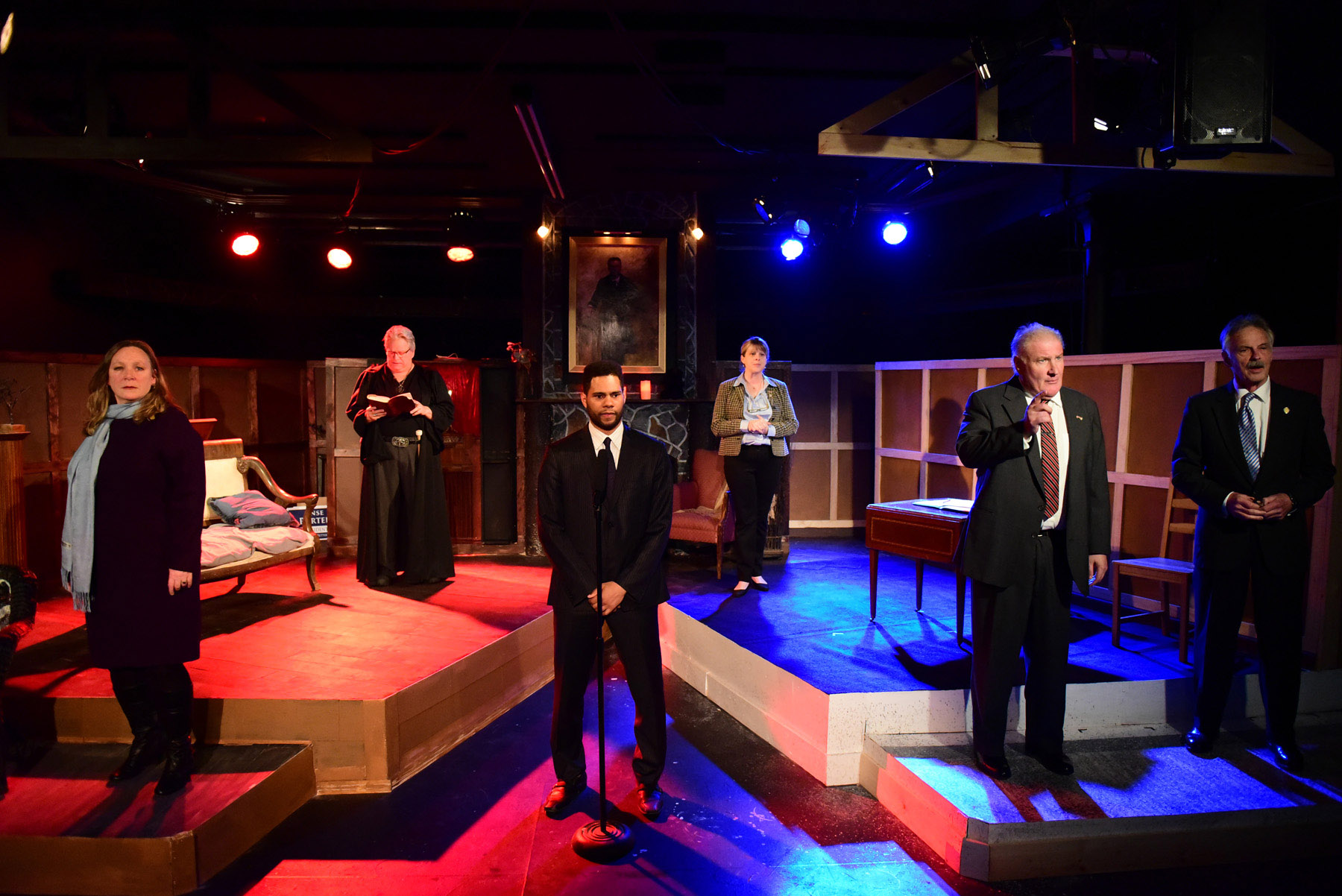 Mixing the vulgar hilarity of “Veep” with the behind-the-curtain drama of “House of Cards” and borrowing a healthy dose of both show’s disinterest in playing to an audience that doesn’t want to keep up, “Scapegoat; Or (Why The Devil Always Loved Us),” the thirtieth world premiere in less than ten years from The New Colony, is politically and emotionally precise. Exploring the shifting familial dynamics and professional ambitions of a multi-generation political dynasty, “Scapegoat” takes a sharp left turn early on that playwright Connor McNamara uses to shade this portrait of corporeal and eternal corruption.

In terms of its narrative, “Scapegoat” is overloaded at two hours. McNamara has clearly done his research and it is not difficult to appreciate the seriousness with which he approaches his subject. Yet “Scapegoat” would probably work better as a miniseries, with the time, space and structure to better explore some of its more complex themes, in particular Satanism being synonymous with individual liberty. At best it seems like bad branding for such a high-profile family. Yet there is an underlying sense that McNamara has much more to say but wisely chooses to keep things moving at a snappy pace befitting a genre that made “walk-and-talk” a household term.

Given its scope, it’s no surprise that “Scapegoat” also makes a poor fit for the Upstairs Main Stage at The Den. Locked into an awkwardly rigid set that attempts to be living room, office, porch and press conference as well as a symbolic representation of the ideological divide currently ripping our country apart, the cast tends to move carefully especially in transitions. Thankfully this awareness of spatial limitations doesn’t affect the overall quality of acting with fine performances from Echaka Agba, Evan Linder, Jeffery Owen Freelon Jr., Barbara Figgins and John Kelly Connolly.

Despite issues of breadth, “Scapegoat” finds an ideal home at The New Colony, a company that, for better or for worse, seems to prefer a maximalist approach to new work, the underlying idea being that it’s always easier to take away than to add. In that respect, it’s not hard to imagine this play either expanding (both physically and narratively) or shredding some of its components to further hone its shrewd insights into the inside baseball nature of American politics. I’d wager that it is only likely to get more relevant in the coming years. (Kevin Greene)