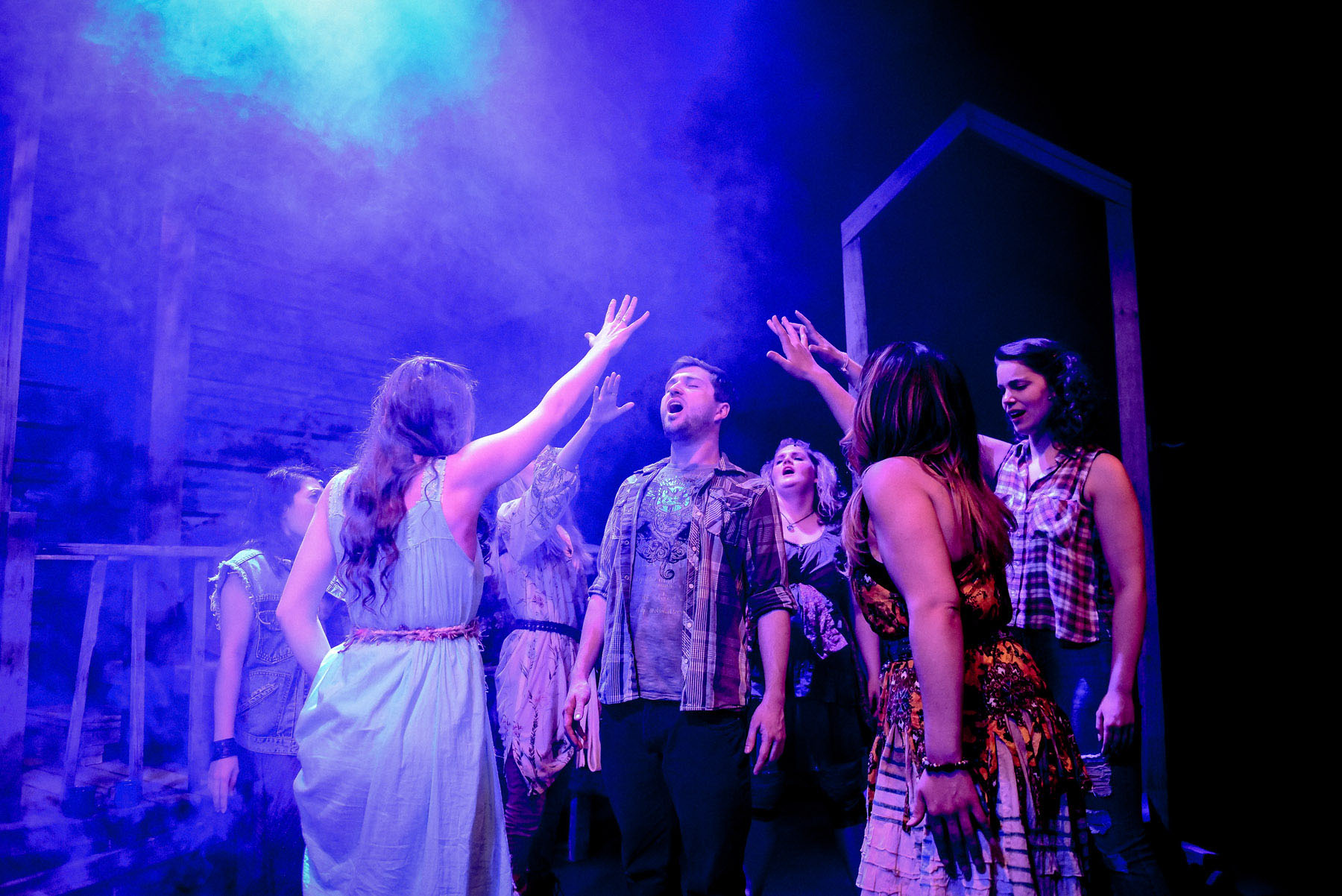 Royen Kent with the cast of “My Name Is Annie King”/Photo: Evan Hanover

It is no coincidence that a show about a charismatic serial manipulator and abuser of women is opening at the former home of Profiles Theatre, freshly rebranded by Pride Films and Plays as the Pride Arts Center. Having recently engaged in a multi-year residency with PF&P, Underscore Theatre, Chicago’s premier destination for new musicals, has taken over Pride Arts Center’s mainstage for “My Name Is Annie King,” a backcountry thriller written by Krista Pioppi with a bluegrass-based score and lyrics from Aaron Albert and Katy Rea that regularly aim for the gut.

Toxic masculinity plagues the heart of “Annie King.” It is embodied both in the aforementioned charmer Cash (Jeff Mills, a performer as captivating as the character he embodies) and Lucas (Royen Kent, also the show’s co-musical director along with Meagan Piccochi), a “troubled” young man whose impossible-to-please father has recently passed away, setting him on a literal crash course with Cash and his “family”: a collection of women who form a religious cult with Judeo-Christian underpinnings and pagan charm with Cash at its apotheotic center. While sex is a quintessential part of this sister-wives setup, Lucas, in his guitar-playing, lost-soul pseudo sweetness falls for Rosalie (Paige Daigle), the family’s literal virgin whose “purity” is being maintained for unknown but surely malevolent reasons.

Suffice it to say this isn’t your standard meet-cute and the demands of this rather epic musical are met by a game cast all under the confident direction of Alex Higgin-Houser. Underscore has put its budget to exceptional use: the heady atmosphere of Erik Barry’s lights is lent an even greater moodiness by Jesse Case’s attentive sound design. The generous space is occupied by Eric Luchen’s set, a cabin so cozy you’d be happy to crawl inside, though ideally without its current residents. And good luck taking your eyes off the magnetic fire pit at center stage.

“Annie” has many qualities in abundance; however, in its current form two things tend to work against it: characters and songs. While the size of the ensemble signals its polygamist undertones, there are entire characters here that remain fairly anonymous. And while the women’s voices are magnificent when in chorus with each other, “Annie” could sacrifice a family member or two and still remain impactful. The current track listing could also stand for slimming if only to better differentiate between individual songs. “Away From The Wood,” deep in the second act, is the only true showstopper and anyone who’s been to a bluegrass concert can attest to the harmonic monotony that the genre tends to default to.

A very original musical, “Annie” nevertheless contains some narrative conceits that irk, especially the romance between the virgin and the guitar-slinging troubled boy. For while Lucas eventually transitions into a progenitor of Cash’s brand of psychological abuse, the root causes of his behavior aren’t satisfyingly excavated. The musical seems to embrace Lucas’ problematic identity as a misguided soul whose obvious self-loathing is outweighed by some kind of inert inner goodness signified by the fact that he writes songs about being in love. That sort of pop romanticization tends to not stand up under closer inspection.

Which brings us to the conclusion of the play, which is troubling, not so much for its violence but rather the overtly rosy way with which the show let’s Lucas off largely scot-free even going so far as to suggest that his decision not to entrap Rosalie in yet another unbalanced relationship is somehow applaudable. The ending certainly sends a positive message as Rosalie seizes on her autonomy and chooses not to see herself as a victim. Yet this moment is seen through the lens of Lucas’ gaze, which is alternatively pitying and longing. Even in her triumph, it seems the work itself cannot help but objectify Rosalie. This leads to a desire to see this musical more for its Bechdelian possibilities rather than as means of maturation for its men.

It’s small potatoes next to the potential of this highly original work but if the content were to shift even further away from the subtle caresses of the patriarchy, “My Name Is Annie King” could become a truly defiant work. (Kevin Greene)