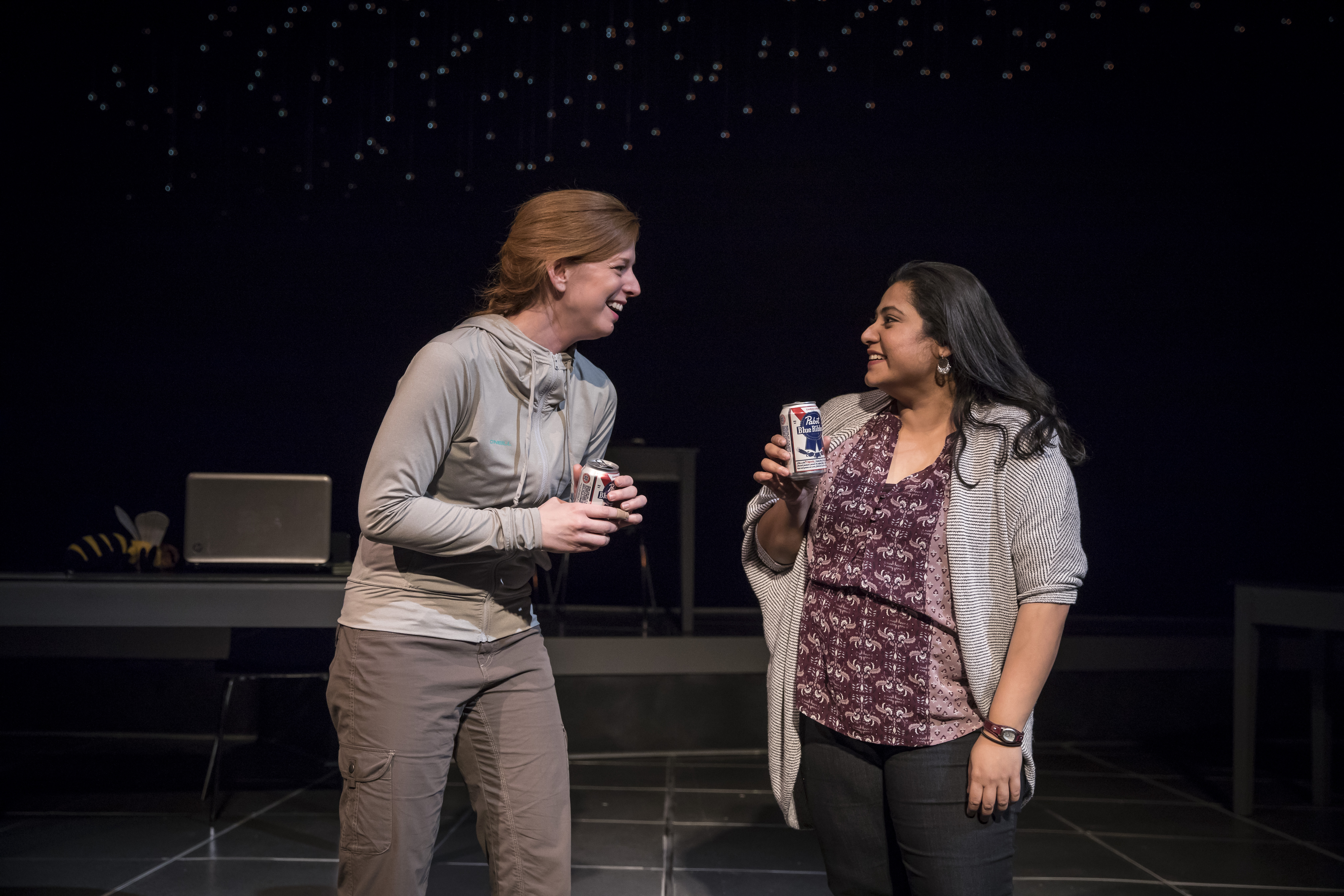 Science and math have been the focus of several productions already this year. And while Madhuri Shekar’s “Queen” is an assured piece of writing, Victory Gardens’ world-premiere production of it could learn from Court Theatre’s “The Hard Problem” and TimeLine’s “A Disappearing Number.” While lab work doesn’t often translate to thrilling scene work, “Queen” gets little help from its flat and stationary staging, which often plays directly to the audience, breaking with the otherwise realistic approach. Were this not such a well-written and generally well-acted play it would be positively soporific. Thankfully Shekar delivers a thought-provoking examination of ethical slippery slopes and how repercussions are echoed differently through gender and race.

Concerning the research of Sanam (Priya Mohanty) and Ariel (Darci Nalepa) on colony collapse disorder, the play’s first success is not losing itself in the weeds of a topic that the audience will have, at best, passing understanding of. Its metaphors resonate in both of its lead characters who, through their research, discover a means of moving through the world that satisfies their respective consciences. And while Nalepa is the more seasoned of the two, this is Mohanty’s story, a well-earned opportunity to visibly work against some of the concerns she raised regarding the casting of persons of color in Collaboraction’s “Gender Breakdown.”

Set in opposition (Sanam the cool-headed mathematician, Ariel the activist turned researcher), Shekar smartly begins to demonstrate cracks in their friendship almost immediately. From the sharp observations of micro-aggressions to the bawling out Sanam gives Ariel at the play’s climax, “Queen” is written from a viewpoint not available to white playwrights and as such falls nicely into Victory Gardens’ socially motivated mission. Shekar’s even-handed approach allows for insight into the layered motivations of an Indian Wall Street analyst (Adam Poss) who, in the hands of a clumsier playwright or our own quick-to-judge society, would have just ended up as a stereotypical aging frat boy. Her wrath falls more squarely on the professor (Stephen Spencer) in charge of Sanam and Ariel’s research who is all too quick to turn a blind eye to the problematic developments in their research.

“Queen” is a play about consequences and who suffers from them. And while it eventually capitulates to the hurt feelings and savior complex of a white woman, it does so with a broader understanding of the political drama that has been unfolding in America since its inception: those who cheat very often win and the idea that it is better to take the moral high road risks the collapse of society as we know it and could potentially trigger the destruction of the entire planet.

The stakes of “Queen” are very real. Almost too real at times. The way things are headed, it is not difficult to imagine a healthy future for this new work. While this may be its first production, I doubt it will be its most essential. (Kevin Greene)