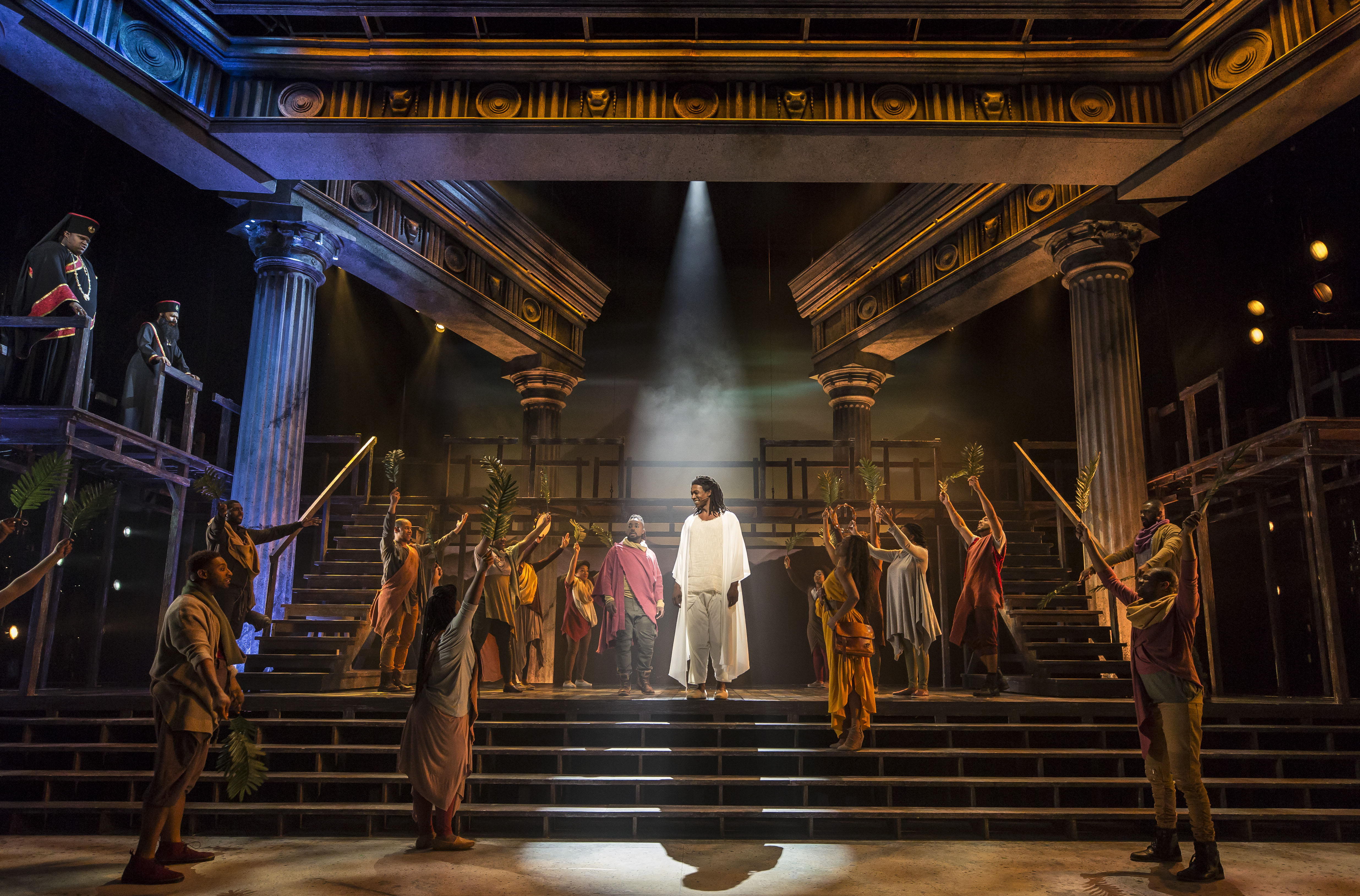 Hot on the heels of Christianity’s yearly examination of the crucifixion, resurrection and subsequent martyrdom of Jesus Christ of Nazareth, Aurora’s Paramount Theatre brings us the 1970 Webber/Rice rock opera “Jesus Christ Superstar” in a lavish production befitting the 1931 movie-palace edifice and, as is most often the case, ignoring the originators’ vision of an intimate telling of the Jesus myth as seen through the eyes of the conflicted, compelling character of Judas. Yet myth speaks the language of parable, ringing differently on every ear and no whispering or shouting of this tale can ensue without mention of miracles and prophesies, leaving every window flung open to individual, spiritual resonance.

In a time when so many Chicago theaters struggle to discover and maintain imperative racial inclusivity in casting, triggering a dialogue just as bitterly political and sociologically sweltering as that of “Superstar” itself, director/choreographer Ron Kellum employs an all-black cast. The musical direction team of Tom Vendafreddo and Kory Danielson allows such vocal gospel-style melismatic ornamentation that it leaves one to wonder if this broad hallmarking might be considered prejudicial itself. No matter the why-nots and wherefores, and allowing that rock artists must be allowed the same freedom of expression as their Baroque opera predecessors, the production stands as a first-class exploration even if Mary Magdalene is so constantly present and specifically lit as to make Jesus difficult to locate in pivotal moments and, despite Kellum’s promise to “represent truth… regardless of… orientation,” entirely heteronormative and Webber’s melodies sometimes disappearing entirely. And spoiler alert: Jesus isn’t humanly buried but is resurrected right off the cross. Stunning effect. Rice wept.

Strongest theatrically and vocally is Rufus Bonds, Jr.(Pilate) with Evan Tyrone Martin (Jesus), Mykal Kilgore (Judas) and Felicia Boswell (Mary) turning in affecting portrayals. Which voices will essay these roles when Lyric Opera mounts the show next spring? How much will they trill? Will Jesus be God or man? What part is opera, what part is rock?

Do I sound conflicted? I am. Can I ignore being profoundly moved? I cannot. (Aaron Hunt)

I’m sure it will be AMAZING!!

So what makes this OK with the shoe on the other foot?