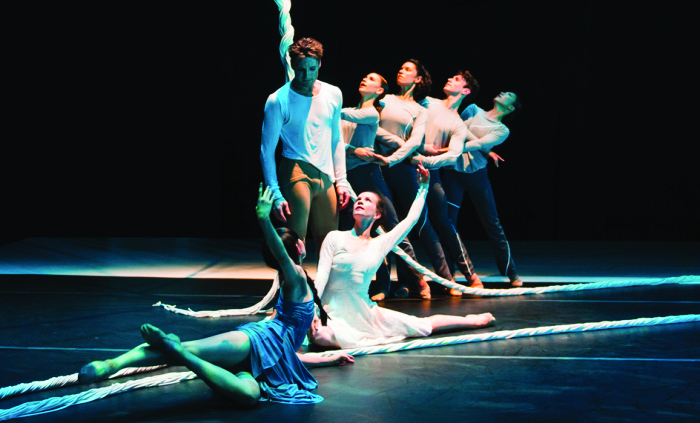 Jessica Lang Dance in “The Wanderer”

Following up on her 2016 premiere of the well-received “Tesseracts of Time,” Jessica Lang and her company return to the Harris Theater May 3 to reprise “The Wanderer.” Unveiled at the Brooklyn Museum of Art, and set to Schubert’s “Die schöne Müllerin,” the production also played Jacob’s Pillow where it received critical praise for its inventive stagecraft and the vibrant presence of its dancers. Lang works at the fore of contemporary ballet, lauded by her peers and watched with interest by the critics of the genre. We spoke recently with the Bessie Award winner to discuss her cultivation of Chicago audiences, the effects of delayed plans for her Long Island dance center on her artistic ambitions, and her appreciation for incorporating diverse art forms into her choreography.

This work premiered in 2014 as your first evening-length work, what led to your bringing it to Chicago?
Well, interest I guess. We performed and made our Chicago debut last season in November 2015. We came to Chicago and performed and premiered at the Harris one very special work that was commissioned by the Harris Theater and the Chicago Architecture Biennial, and we presented a work in collaboration with architect Steven Hall. We had a great season and, to our delight, we were asked to return this season which is not unusual, but you’re thankful when you find a good partnership with a theater and an audience that responds to your work. Michael Tiknis had thought it would be great to present “The Wanderer” at the Harris Theater for Music and Dance and that’s what “The Wanderer” is, live music and dance.

The scope of your company’s productions has shifted as you’ve worked to open the Jessica Lang Dance Center. How is the development of the center coming?
Due to unforeseen circumstances we are not locating our center at the previously identified location. We are, however, beginning major programming in the Long Island City area in Queens so we’re upholding our mission and beginning some big educational programming for pre-professionals and one that is geared for a community where we’ll be offering opportunities to participate, observe and experience dance that’s free to the public. So we’ll be doing two different kinds of approaches to the community.

So, how does that change what you’re hoping to do artistically?
The goal has always been to give the company a home in the community in which we live, and our offices are based here. We’re an extremely successful touring company, and we’re in the middle of a twenty-nine-city tour from October to May. We find ourselves uniquely positioned having a major success around the globe, but also in a place that is warm and welcoming to our community we develop and as it develops.

Speaking of growth, a few days ago I read an interview with Alexei Ratmansky and a few other choreographers in the New York Times, where he said, alongside Crystal Pite, you were among the very best female choreographers working right now.
Yes, that was very nice of him.

And his point was that there aren’t enough women choreographing classical dance. I wanted to get your perspective on that.
Sure. It was kind of Alexei to point that out, but it’s about doing. Yes, there’s an imbalance and I think questions should be asked toward the people in control of the commissions. I don’t want to sit and analyze why not—I am doing it. I don’t exist in a big ballet world in terms of I didn’t dance for the New York City Ballet but that doesn’t mean I haven’t been practicing my craft for almost twenty years. And I truly, truly believe in the separation between a dancer and a choreographer and I think one can be the other, but to really focus in as a choreographer is how I changed my career when I was young enough to spend time and understand my own process. Now that I am twenty years into this career, I feel like I understand the choreographic process is definitely different from being a dancer who choreographs. Why more women don’t do it? I really truly believe that it’s also in the ballet world, I don’t think you can say it’s the same for the rest of the genres, though again I’m not sitting around analyzing.

In terms of the choreography and your process, the integration of visual elements is something regarded as distinctive in your work too.
Absolutely. I find I’ve opened into a little part of myself that wants to continue to explore objects and ideas and collaborate. I think that’s so interesting and compelling and it’s just what I do, so I’ll continue to do that. I find that a nice connection to all art audience members, so those who might be less familiar with dance latch onto the visual side of everything, or the emotional side. You know, there’s a broader sense of access to my work. It’s not that my work is different, it’s just in a way that I appreciate and agree with all the other art forms that each inspires the other to do more and better art and not to isolate ourselves into one area of definition.