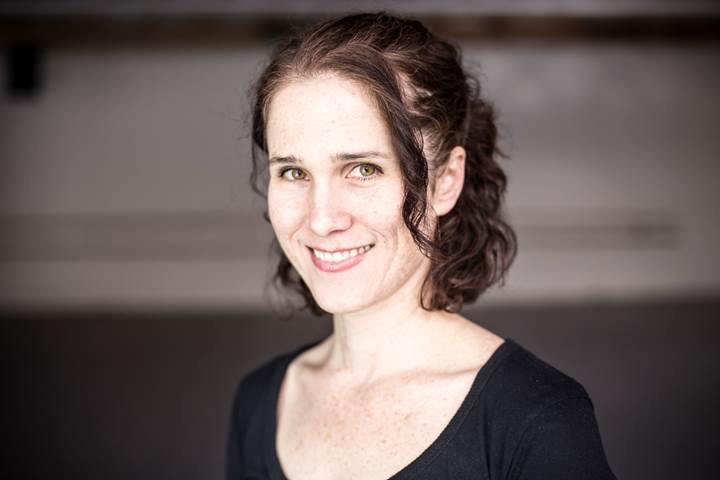 Julia Rhoads is the humorist-humanist-choreographer-impresario behind Lucky Plush Productions. Her company is synonymous with a unique brand of dance-theater performance that defies categorization but deserves a name for its uncanny familiarity, wit and keen, yet gentle observation of human relationships, triumphs and folly. Rhoads has been invited to create a piece for Hubbard Street Dance for the first time, as part of their annual “danc(e)volve: New Works Festival” at the Museum of Contemporary Art May 10-14, alongside Robyn Mineko Williams, Penny Saunders and Alice Klock. Rhoads spoke about the process of building trusting relationships and sense of play and exploration into the unknown with a new group of dancers in a short period of time.

This is your first collaboration with Hubbard Street.
It is! They’re so game to collaborate and play. They’re responding wholeheartedly and I’m asking them to try things that I think are pretty new to them, so it’s nice having that yes in the room.

And they’re a versatile company; very open to doing something new. What you do with Lucky Plush is some of the most un-categorizable dance performance, really integrated with other theatrical elements, much more so than most other companies. It’s nice you can push them a little further than they’ve gone before.
One thing that’s nice for me is that I’ve been steeped in an evening-length rhythm for a long time. I notice the way I think about building vocabularies and anchors for audiences, building expectations, hoping to then subvert expectations and create moments of humor and tension—I’m used to doing that in a longer arc. The repertory concert is more of a twenty-minute piece. It’s cool for me to think that through and challenge them, but in a way that they feel totally supported. I want them to feel like they can find moments of vulnerability and play in a short-form way, but so they feel like there’s a care-taking, even if the goal is to find places where things aren’t perfect. That’s been really fun. When I make work for Lucky Plush, there’s a longer arc of relationships over an evening-length show; I was a little nervous to get narratively driven for Hubbard, so I decided I would use language and voice in a way that draws audiences into a world on stage and it’s not always in service to driving narrative forward. That’s an interesting and fun point of tension, because the dancers are speaking and there are points where it becomes rhythmic and a score begins developing. We’re playing with using vocabularies that are familiar, giving audiences anchors so expectations can develop and be broken with a sense of play. They’re using song, whispering, chanting, humming.

Musician Michael Caskey advised for this piece—he’s very familiar with how I move between dialogue and dance and song in the way I work. He suggested I bring on someone who specializes in voice; we’ve been working with Bethany Clearfield, she’s really amazing. She works with symphonies, she has her own rock band. She’s come in and worked with me and the dancers to find these vocabularies. 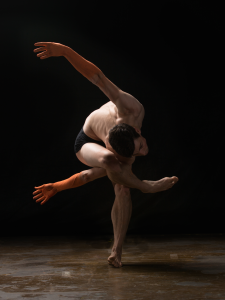 Would you say that you’re using a bit more abstraction in this shorter format as a way of finding space within the piece?
I use dialogue in a very conversational way to foreground the dancers as individuals and there’s often a causal tone. In this context the audience will understand a lot of what they’re saying but at times the use of language is a material, like movement is a material and lighting is a material. Within that there is abstraction, but for me it makes strangely logical sense. The dancers are themselves first and foremost; I work in a way of listening and responding as opposed to performing. There’s a shedding of a type of performance I’m interested in that I’m bringing to this work as well. It builds out of real relationships between the dancers and the audience can become invested in the relationships developing on stage.

A lot of the movement generation and the fragments of song and dialogue that build into a sound score were taken from a survey I sent to the dancers. I had a three-day workshop period with them in December to just play and get them accustomed to the way I work. When people see Lucky Plush they come up to me and say they feel like they knew the dancers by the end of the piece. That’s one thing I wanted to do with Hubbard; to foreground them in a way that people felt connected to them as people first. So I sent them a survey—a lot of it was dumb questions: nicknames, favorite color, stuff like that. But I also wanted to learn things about them to make the building blocks of the piece. One question was: describe in words one of your favorite dance pieces. One might say “I’m reaching to the side, I twist forward” another might just give me “swish, boom, tap tap tap.” I took those, printed some of them out, took them into the studio and I made a movement phrase based on that. In a way I thought that even though this is my movement, it’s coming from their words and maybe there will be some resonance already. The way I work in the studio is to give them prompts of ways to manipulate that initial phrase. I love that that survey has become the seed for all the material in the work, celebrating the dancers and their community.

You’ve had to get to know them so quickly. You’re used to working with an ensemble that you know intimately, all their personalities contribute to what you make so deeply.
I was nervous obviously, but I trust the room, trust the people. They’re such amazing performers and humans and it’s a pleasure to work with them.