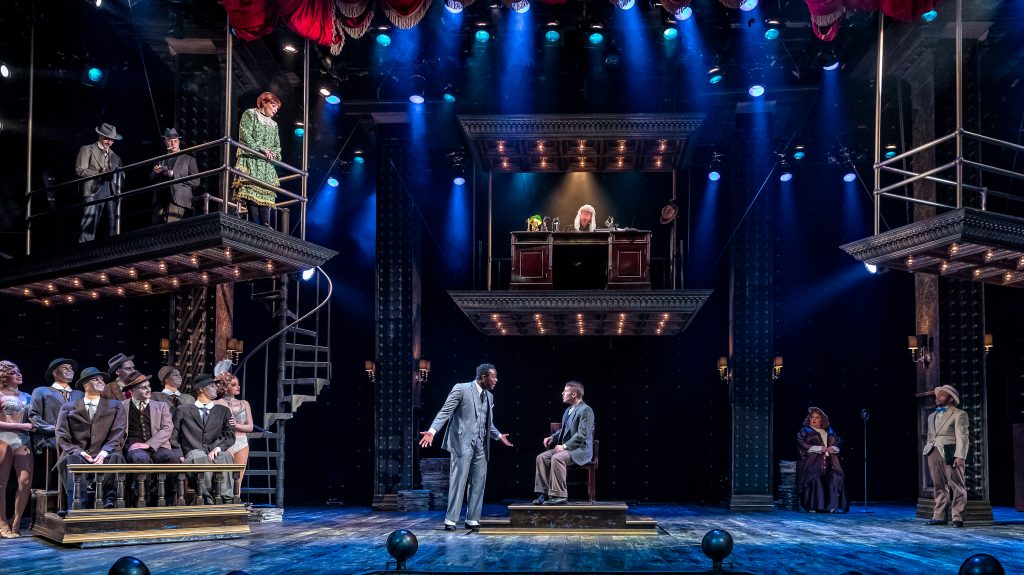 The cast of “Chicago” at Drury Lane/Photo: Brett Beiner Photography

“Chicago” was written as a comedy, though many versions of the show don’t play to that aspect heavily–and rightfully so. The high rate in which murders happen in our city’s reality isn’t very funny. Typically, the show’s earworms like “Mister Cellophane,” “All That Jazz” and “Cellblock Tango” add comedic elements to an otherwise serious topic.

This version, directed by Drury Lane’s artistic director William Osetek, plays up the comedic aspect of the show in rather peculiar ways.

In “Funny Honey,” which is a song that describes how Roxie (Kelly Felthous) can manipulate her husband into pretty much anything–including taking the fall for murder–rather than Roxie’s intelligence or her “womanly charm” being played up, she falls off the piano and comes across as a ditz who happened to have an idea that could save her neck.

The Master of Ceremonies (Michael Accardo), often cast as an emcee like one found in a nightclub, is a newsman in this show. He sits in an office above the main-stage floor throughout the entire production. The exception to this is when he becomes the Judge in Roxie’s court case, ultimately making the media the ruler of Roxie’s fate. It seems evident that Osetek was trying to play on the classic news angle of “if it bleeds it leads” and highlight how the media can be manipulated into creating “celebrity murderers,” glorifying them with non-stop coverage, like the cases of John Wayne Gacy or, in more recent history, Drew Peterson. However, this interpretation of media as judge gives reason to pause.

Other elements of the show such as the smooth-talking lawyer Billy Flynn (Guy Lockard) appearing in an Uncle Sam costume, the gullible reporter Mary Sunshine (J. London) dressed as a cross between Lady Liberty and Lady Justice and Roxie and Velma (Aléna Watters) appearing with gloves that look white but blood-splattered in “Nowadays” also raise the questions. In this age of “alternative facts” and Black Lives Matter, when African Americans are incarcerated at far higher rates than other ethnicities, when murder and violence is an epidemic, are these really the best choices for this production especially when it’s actually playing in Chicagoland?

The show is not all bad. The performers–especially E. Faye Butler (Matron Mama Morton) and Justin Brill (Amos)–are incredibly talented. Butler wonderfully encompasses all of the elements of a Chicago jazz songstress and is, like Mama, a force to be reckoned with. Brill’s Amos is the right mix of foolish and innocent, desperately wanting to be enough for Roxie and do right by her at any cost.

Ultimately, there’s a way to perform this show, in this town, in this time, without it coming across as offensive, but the production choices here are not that way. (Mary Kroeck)