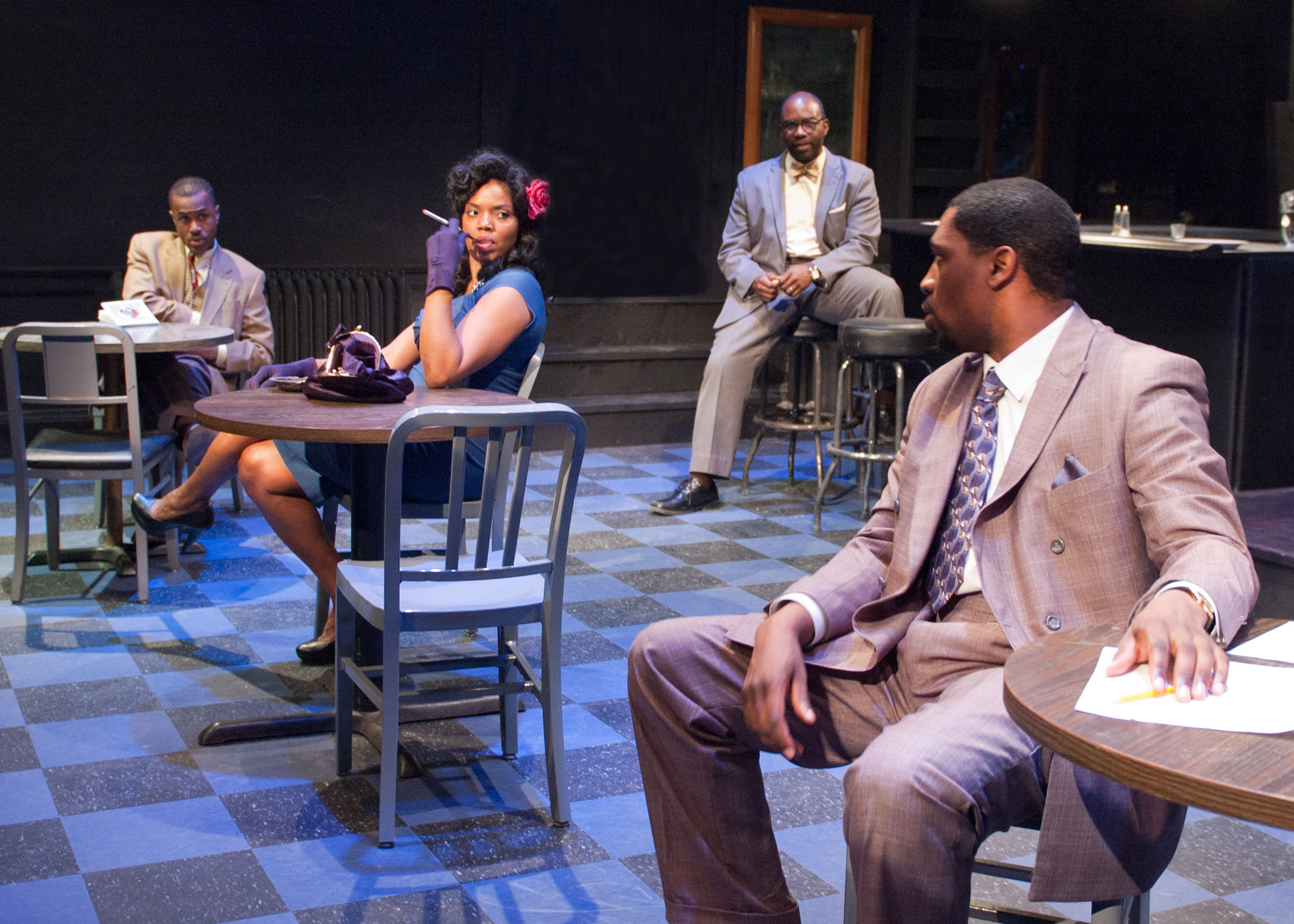 Hot on the heels of The Yard and Jackalope Theatre’s “Blood at the Root,” the Midwest premiere of Dominique Morisseau’s “Paradise Blue” at TimeLine Theatre marks the company’s second collaboration with the playwright, who is quickly making her name for writing powerful stories about blackness in America. Containing many similar themes to last year’s “Sunset Baby” (racial vs. familial loyalty, urban life as a constant moral grey zone, what it means to be a truly independent woman), “Paradise Blue” has meat and guts but needs to reveal them more efficiently.

Much of the play’s first act is slow scene setting, giving characters time to express themselves. The inhabitants of Detroit’s Black Bottom neighborhood, in particular a stretch known as Paradise Valley, are mixed and varied in all ways but one: race. True to its name, Paradise Valley is part oasis, part holdout as an urban renewal plan put forth by the mayor moving to “clean up the blight,” which is, of course, a euphemism for pushing the black folks out to make more room for whites.

At the heart of this conflict and Morisseau’s play is the club that bears the strip’s name (or vice versa as the owner would have you believe): Paradise. Owned by the talented but tumultuous trumpeter Blue (Al’Jaleel McGhee) who inherited the club (and quite a bit of emotional baggage) from his deceased father, it is tough to say whether Paradise is actually the pride of Black Bottom or if Blue and his band, pianist Corn (Ronald L. Conner) and drummer P-Sam (Charles Andrew Gardner), just want it to be. As the audience we only ever see the club in off hours: mornings of coffee and conversation and long nights of Blue restlessly practicing, performing rituals in an attempt to rid himself of his “troubles.”

The second act leaps into conflict head first, so much so that it is liable to catch the audience off guard. Having made her tantalizing entrance in the first act, the mysterious Silver (Tyla Abercrumbie) quickly goes to work on the susceptible Corn in an attempt to get to Blue and, more specifically, his property. An illuminating scene that sets off the Chekhovian principle of firearms and when to use them also lets Morisseau speak freely on the topic of womanhood, setting the man-eating Silver in contrast to the “go-along gal” Pumpkin (Kristin E. Ellis) who is more Blue’s caretaker and punching bag than his wife. Elsewhere, Morisseau waxes on the condition of being gifted and black, in knowing your full potential will never be reached because of barriers erected by those who despise you.

There are big ideas at play in “Paradise Blue” but they need more space to develop. At two-and-a-half hours, there are entire threads that can, unlike Blue’s demons, be excised. To that point the play lets its lead off too easy, concentrating more on voodoo spirituality than on the musician’s innately violent misogyny. As a whole, the play could be more powerful without the element of mental illness, instead prodding the selfishness that underlies Blue’s moral conflict. For a play that goes from amble to dead sprint without much in the way of warning, Morisseau needs to be able to raise stakes without bringing a loaded handgun into the room.

A technical snafu on opening night lead to an ending that was probably more “Twin Peaks”-esque than Morisseau or director Ron OJ Parson intended. It was not the most interesting thing that happened that evening though it was, tellingly, the most unexpected. Dominique Morisseau has demonstrated her ability to take narratives and turn them back on themselves, highlighting overlooked identities and ideas. “Paradise Blue” shines a light on a history that deserves to be seen, yet Morisseau has demonstrated that her work is capable of burning even brighter. (Kevin Greene)