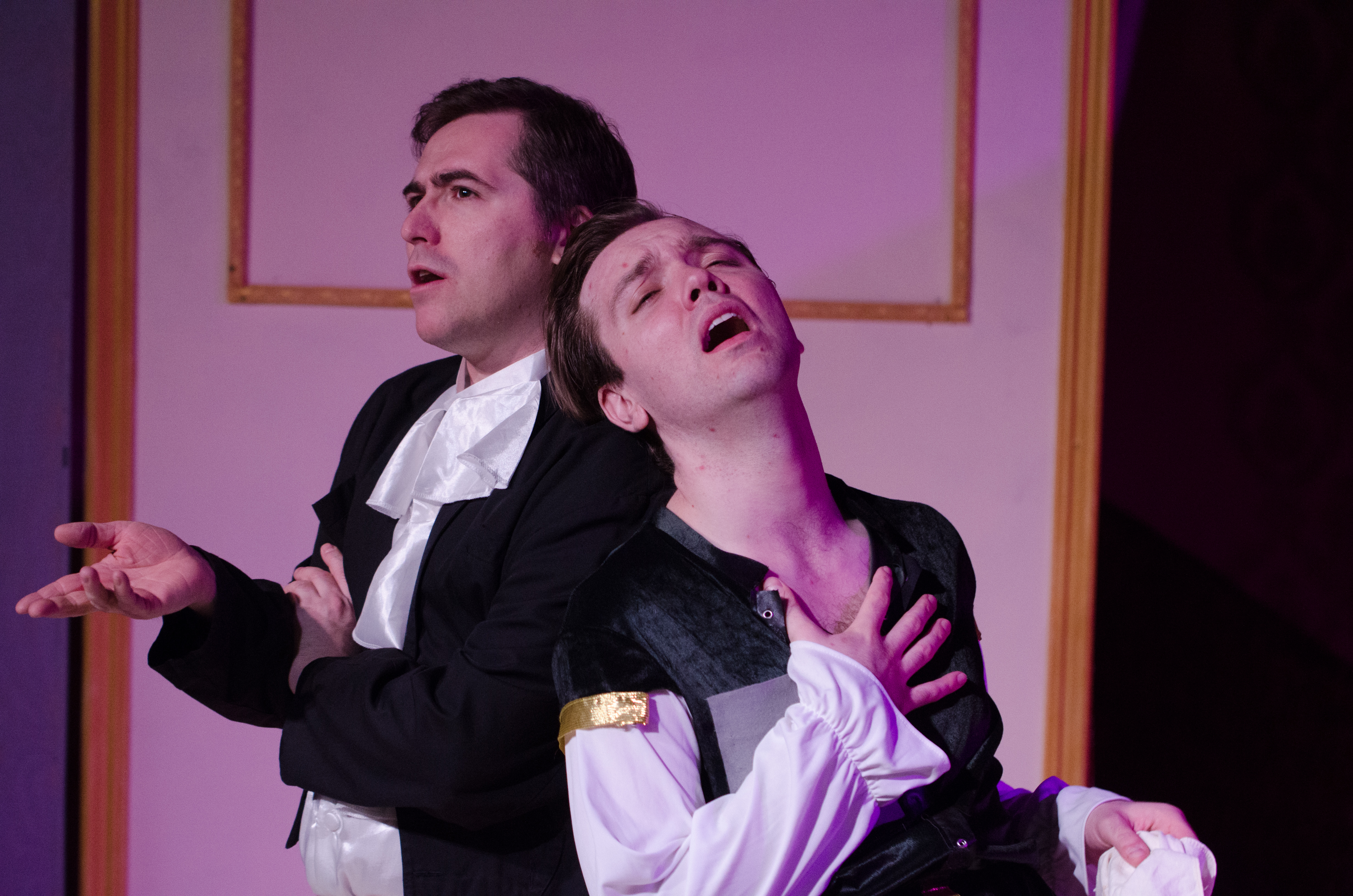 If you think that plays in verse ought to be confined to the Elizabethans and their ilk, David Ives’ 2010 “translaptation” of Pierre Corneille’s 1643 “Le Menteur” (“The Liar”) shows how rhythm and rhyme turn the ordinary shenanigans of a pathological liar on the loose into a sidesplitting extravaganza of madcap revelry for lovers of palaver.

The antics begin when Dorante (Josh Hambrock) arrives in Paris, either six months ago or this afternoon, to scare up a spouse or fight a duel or humiliate a spinster. Like any narcissist, he cannot do without an audience, so forthwith he hires the pure-hearted Cliton (Brendan Hutt) directly off the street to be his valet. So equipped, he can only be a gentleman, perhaps even a war hero, he insinuates (or rather, baldly avers) to some passing ladies—the small and spunky magenta-gloved Clarice (Meghann Tabor) and her taller, quieter friend Lucrece (Katherine Schwartz), topped with a tiny hat that any aristocrat out trotting on a constitutional would envy. The costumes, designed by Gary Nocco and Caleb Awe, tread the line between luxury and ludicrous.

A whippersnapper bent on wooing a woman with a few whoppers is no wonder; it’s the sheer velocity of Dorante’s confabulations—of every color and variety, all neatly wrapped in verse that manages to be entirely contemporary in diction, dripping from his tongue like water from a cracked pipe—that makes this play so outrageously amusing. Flirtation is just a start; a little deceit can make his old friend Alcippe (Shane Roberie) mad with jealousy or wreck the meticulously devised strategies of his father, Geronte (Michael Hagedorn), in his efforts to see his lineage extended—with a proper woman of wealth, birth and beauty.

While the women may be mannequins for absurd fashions or pawns to secure titles, Clarice, Lucrece and their twin maids, Isabelle and Sabine (humorously portrayed by Megan DeLay), are far from docile and scheme as well as their oppressors (ahem, suitors). Politics aside, the Prometheans deliver an evening of over-the-top fun that will leave your abs smarting with glee. (Irene Hsiao)