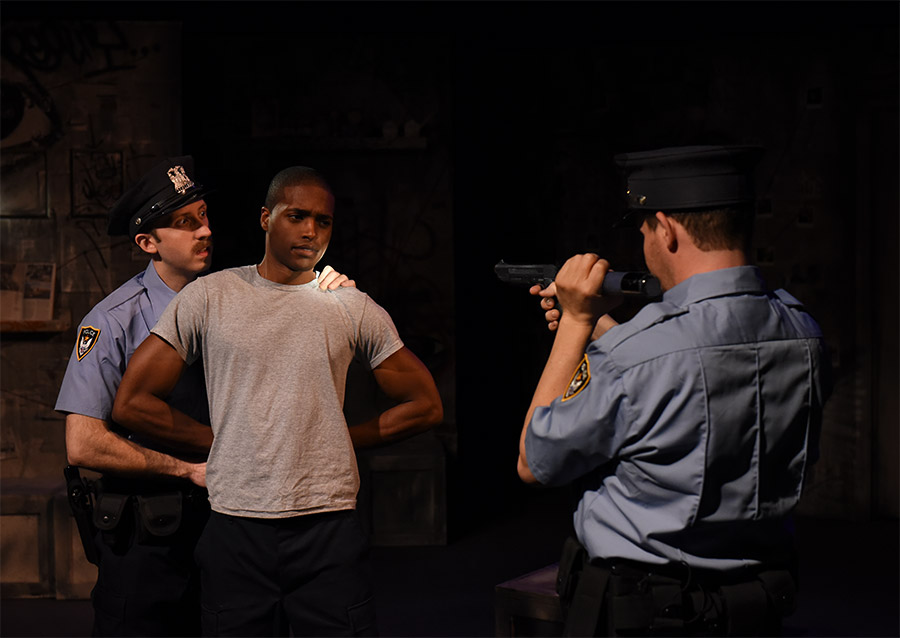 Following last season’s exploration of the works of Stephen Adly Guirgis, the opener of Eclipse Theatre Company’s Kia Corthron season, “Force Continuum,” shares a similar vision of race relations in America. Corthron’s unsentimental police procedural has a great deal to say about its subjects, sometimes to the detriment of those very ideas.

The main focus of “Force Continuum” is Dece (Maurice Demus), a young black cop in a city where that very idea seems like a contradiction. Having come from a family of black cops, Dece gradually begins to understand his conflicted position. When familial loyalty collides with professional obligation, Dece explodes asking, “Am I black or am I a cop?” It is a profound moment for a young man dealing as much with institutional racism as he is with the memories of lives lost in the line of duty.

The pre-show soundtrack suggests the late nineties/early aughts and indeed certain elements of this play do feel dated such as the use of cubes for everything from car seats to hospital beds, the brevity of some scenes and the weight of the turnaround time between them. These awkward elements are unfortunately emphasized by Michael Aaron Pogue’s direction, which has the tendency to stage scenes in a manner that feels neither realistic nor dramatic. His actors do their jobs loudly and dialogue can get lost in the booming black box of the Athenaeum.

While the multiple storylines of “Force Continuum” do intertwine in a kind of Iñárritu-esque kind of way, the generational conflict between Dece and his grandfather (Lionel Gentle) as well as the dynamics between Dece and his partner, Flip (Anthony Venturini), are among the most compelling. It is no coincidence that these are the strongest performances of the bunch. It is telling that many actors play several roles. A side plot involving siblings Mrai (LaNora Terrae Hayden) and Dray (Tyshaun Lang) eventually connects to the broader narrative but feels unnecessary and thins the more dominant and compelling stream. Were that same amount of time used to dig into the idea of what “community” really means (and why we never hear the phrase “white community”), “Force Continuum” might actually be a force to be reckoned with.

All told this is a play that needs some slimming and a production that could use some focus. Still, as a reminder (as if you needed it) of intersectional tension and the continuing pervasiveness of racism in this country, “Force Continuum” sets the tone for what will hopefully be another exciting season from Eclipse. (Kevin Greene)