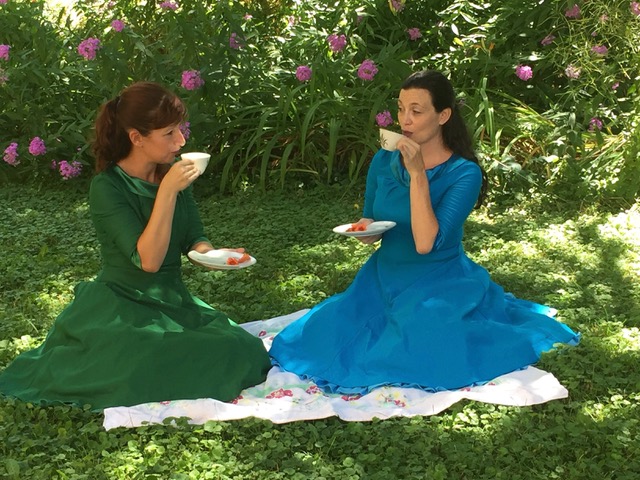 Ellyzabeth Adler, artistic director of Chicago Danztheatre Ensemble and Lucy Vurusic Riner of RE|Dance Group have been friends for more than two decades but somehow never managed a collaboration. “We met while participating in a choreographer’s festival that ran for many years back in the late nineties and early aughts,” explains Riner. “After branching off and doing our own thing for over a decade we reconnected in Natalie Rast’s ballet classes. ‘Ethereal Abandonment’ is really Elly’s baby, alongside Candace Casey. It’s based on images that were in a book that Elly helped caption.” Casey’s images at first inspired Adler to help work with the artist to produce a book, and that project spurred the idea for their collaboration.

As Adler explains: “I met Candace through a former board member when she was exhibiting other works of hers. We stayed in touch and, in 2015, when she was preparing for her gallery/studio opening of her ‘Ethereal Abandonment’ series I was in her studio and commented that they looked like images from ‘The Mysteries of Harris Burdick’ by Chris Van Allsburg. She asked if I would, in the style of that book, write up a one-line story and title to go with each piece of work. As I started working on this project, I got more and more interested in the layers of Candace’s work. She goes into abandoned places, takes photos, then inserts images into them to create the story that she feels is underneath the decay and graffiti. Then she prints them out with a special process and lays them onto wood, adds paint and other media. The images spoke to me, I saw movement, I heard stories and I wanted to create more. Lucy and I were talking about possibly working together and then this summer, local filmmaker Paul Grajnert asked if I would collaborate with him to create a dance film, we brought Lucy on to this project and shot what is now the trailer for the show at houses in Highland Park. That film has now been accepted into Stockholm’s Dance on Camera Film Festival. After talking about ideas with Lucy, we came up with the idea that it will be set in an abandoned theater.”

That sense of place was a strong presence in rehearsals for the work, loosely following the framework of a musical, by turns funny, clever and punctuated with whimsy that audiences of all ages will enjoy. It includes performances by Ellen Aldridge, Daiva Bhandari, Ansley Davis, William Delforge, Stacy DeMorrow, Isaura Flores, Sarah Franzel, Ariana Silvan-Grau, Nelia Miller, Riner and Tony Springs; sound design by Jacob Fisher, and an original piano song by Isaura Flores. (Michael Workman)