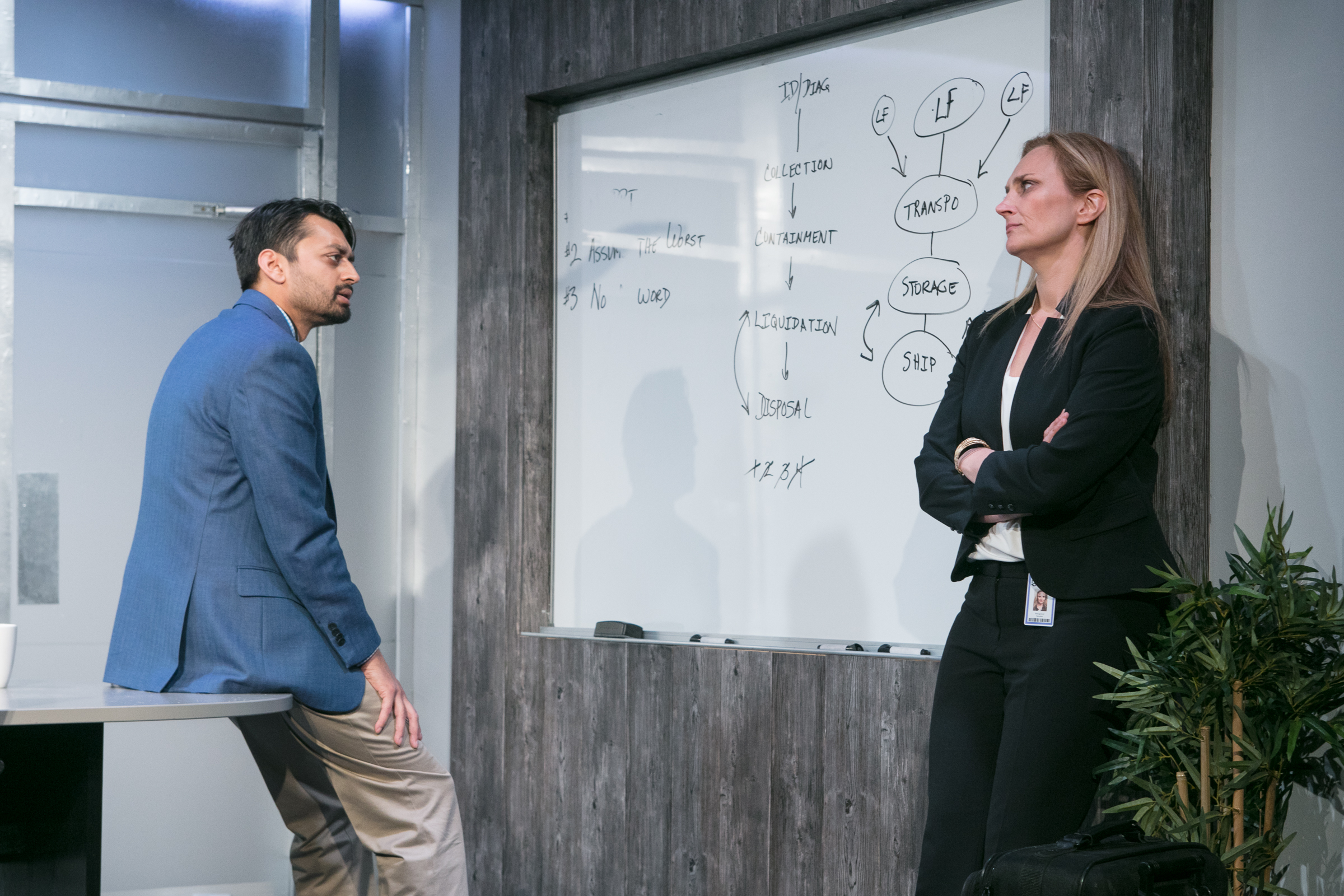 “Just because you’re paranoid doesn’t mean they’re not out to get you” is an expression not without credo in our modern age. It is also an idea that propels Aaron Loeb’s razor-sharp new play “Ideation,” currently receiving its Midwest premiere at Jackalope Theatre. The title itself is one of many corporate neologisms used to debate the optics and optimization of mass murder in a play that pits Occam’s razor against conspiracy theory.

Loeb’s vision of corporate life is as funny as it is terrifying. His attention to detail pays significant dividends as he projects the logic and language of global capitalism onto ideas both systemic (xenophobia) and petty (power dynamics between junior and senior employees). “Ideation” challenges the received wisdom of the corporate world’s capacity (or, more specifically, their presumed obligation) to save the actual world, an idea frequently put forth by companies themselves despite the underlying irony that capitalism’s exploitation of resources both natural and unnatural have led to many of the environmental, biological, sociological et al concerns, both current and forming, for which these companies are making high-profile efforts to deter or prevent. After all, nothing washes down cultural disenfranchisement like an ice-cold Pepsi.

Loeb’s play follows a moral slippery slope straight into the jaws of the beast concluding just before the slip into the belly. It unfolds as a series of dialectical arguments between four management consultants who have landed a big job designing a disposal system for human bodies (ostensibly in an effort to prevent the potential spread of a destructive virus though that very premise quickly becomes dubious). When suspicions begin to cloud their process, they turn against one another in a rapid descent into paranoia fueled either by dispassionate logic or utter delusion. Indeed it is difficult to tell who is being hysterical as the team goes from macro to micro in the blink of an eye, hypothesizing one minute about the potential sleeper-cell structure of a shadow organization bent on mass destruction and questioning even the most basic conditions of their co-workers’ allegiances the next. It is like watching the intellectual equivalent of an ouroboros.

Directed with precision by Gus Menary on what feels like an intentionally claustrophobic set (Corinne Bass), the ensemble (Rachel Sullivan, Kaiser Zaki Ahmed, Japhet Balaban, Michael Kingston and Henry Greenberg) have a firm grasp of this challenging material, performing performance (or performance of performance or….) with ease. Playing out in real time, Loeb leaves room in between theoretical arguments for real emotion that, like conspiracy itself, takes seed, leading to performances that are frequently emotionally recalibrated with impressive dexterity and regularity.

“Ideation” is a play that begs to be seen for its shrewd perspective and impressive grasp of power structures if not for its implications about the degrees to which the average consumer is blissfully unaware of the machinations of the average multimillion-dollar corporation. At the very least it will give you something to talk about at the water cooler the next day. (Kevin Greene)