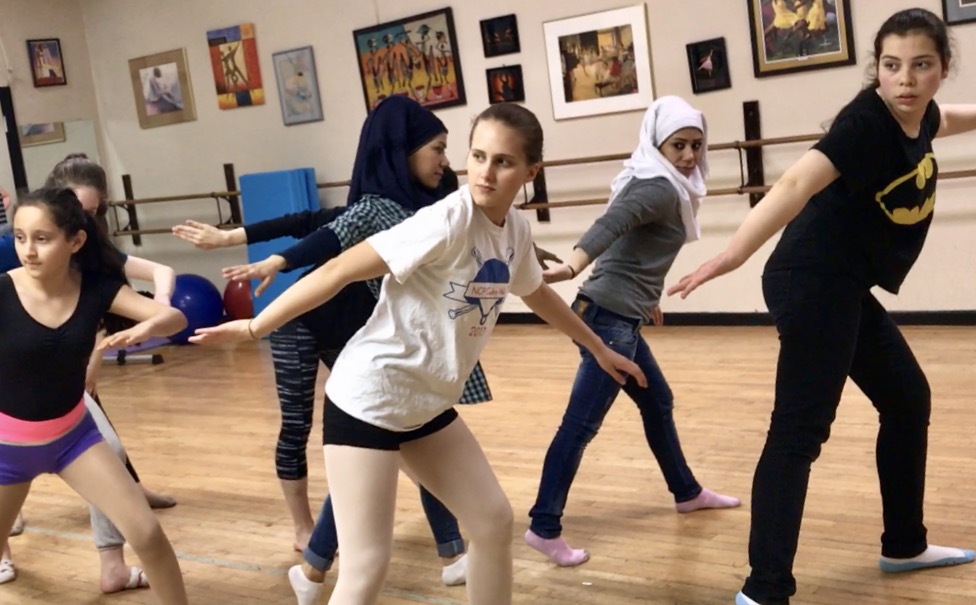 “Head On” began to germinate as an idea for a performance showcase after organizer Shawn Lent returned from living some years in Egypt. She began by organizing a scholarship program for Syrian refugee children in Chicago. “When curator Hillary Aarons contacted me about ‘Head On,’ the mixed-bill’s focus on female activism presented the perfect opportunity to do something specific with these young ladies across diverse backgrounds,” explains Lent about why she decided to focus on young women ages fifteen-to-twenty-five from conservative cultures who are often the most socially isolated. The performance will also be split by gender, seeking to give a platform to the culturally conservative members of the community. “Working with Hillary Aarons, we made the decision to split the audience by gender rather than to bar males from attending.” says Lent. “The question then became, ‘What will the men who attend actually see?’ And the answer was obvious, the live musicians. Men will not see the dancers but will instead get an amazing concert. Jewish ‘harmonica beat boxer’ Yuri Lane and Syrian-American musician Marwan Kamel had been planning to accompany the dancers, and they were excited about the prospect of a ‘blind’ collaboration. This is one of the most thrilling aspects for me and it is an honor to work with them.”

For some, that exclusion might track as an odd or negative choice. Why go so far to include a conservative perspective in dance? “We acknowledge that gender is a social construct and fight the binary. At the same time, we acknowledge that gender plays an incredible role in many culturally conservative communities. Gender-segregated space is not something many liberals have experienced and will hopefully inspire new thoughts and empathy,” says Lent. “For culturally conservative communities, females and males dancing together in public—or females performing for males—may be forbidden or looked down upon. We have found ways to be more inclusive of conservative dancers and I have written on this topic for the Journal of Dance Education. There are some programs in Northwest Chicago that offer a variety of women’s-only recitals and productions in the Orthodox Jewish, Christian and Muslim communities. For most mainstream performance venues, though, such a configuration is not an option. Links Hall proved once again to be radically inclusive by stepping up to host us in their space.” “Head On” includes works by Mz Mr, featuring Crocodile Lightning, Storm Noire, Sheffield Belmont, Miss Vicious and Julia Murray; Hillary Aarons, featuring Katherine Scott, Earlyn Whitehead, Christy Stallknecht, Sarah Morimoto; and Ysaye McKeever. (Michael Workman)

At Links Hall, 3111 North Western, (773)281-0824. Sunday, May 21, 7pm. Free, with $15 supporter ticket option; the performance is also a fundraiser for scholarships to allow the Syrian refugee children to continue their dance and music education through Dance Peace. Learn more or donate at linkshall.org.