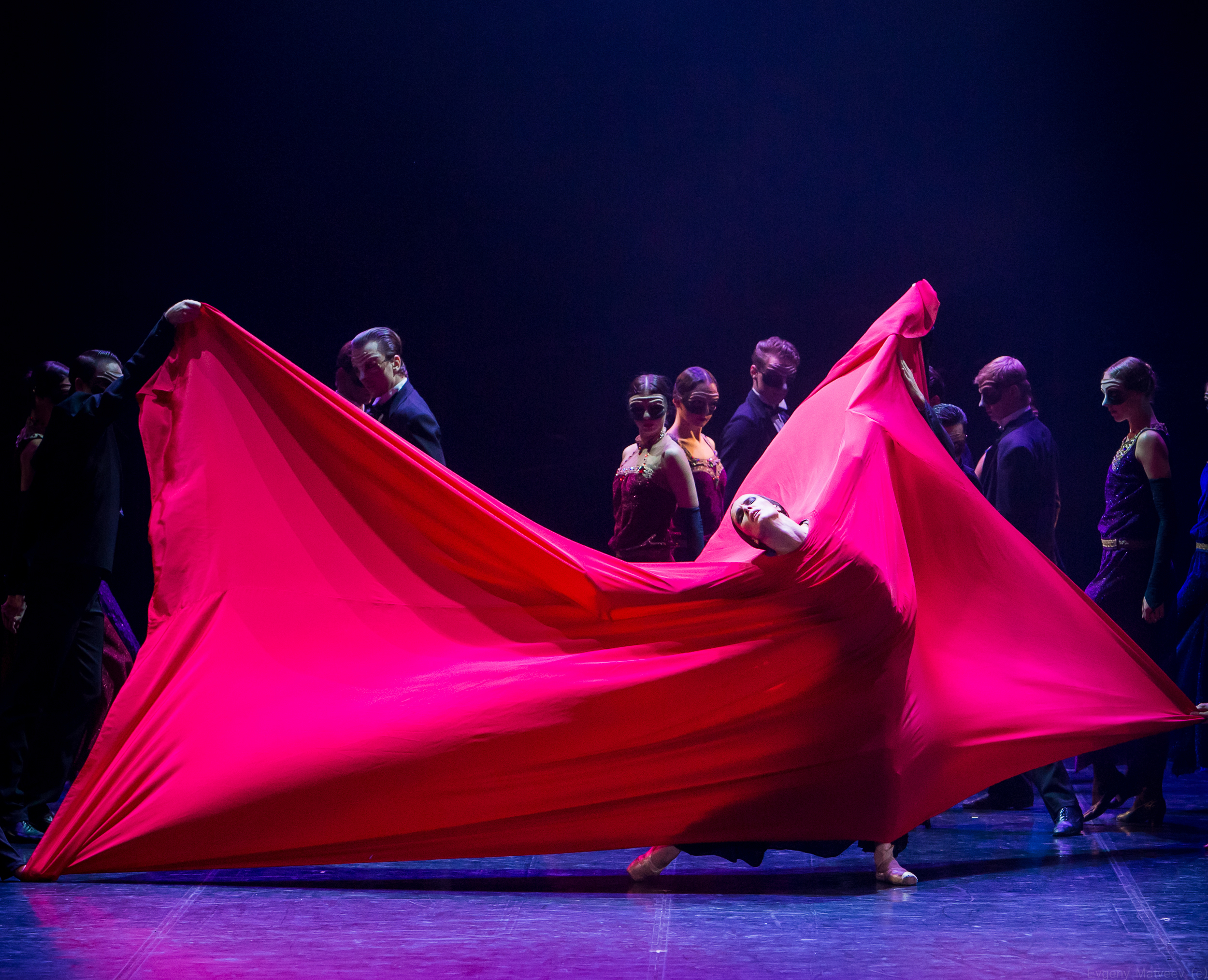 The curtain rises on a familiar tableau: girls dressed in white at the barre, like the painting of the dance class by Degas, going through their paces à la Lander’s “Études,” to the familiar strains of Tchaikovsky’s “Serenade for Strings in C Major,” the music made iconic by Balanchine’s ballet for his first students in America, “Serenade.” Beautiful and orderly, the world of ballet is a heavenly vision—sort of. The Teacher (Oleg Markov) comes in wielding a stick that is both magic wand and switch, summoning forth more shapely lines from his pupils or beating it out of them, assigning extra tendus for insubordination. Boris Eifman dedicates “Red Giselle” to Olga Spessivtseva, the celebrated ballerina who spent more years in a mental hospital than she did on the stage, but the work also serves as a witting critique of ballet as a product of patriarchy, serving up its beauties with a harsh dose of darkness, all brilliantly interwoven with allusions that leave no ballet exempt from the accusation of exploitation.

The Ballerina (Maria Abashova) is immediately visible as the star of her class, supported by her casting as the principal of a ballet characterized by (as the New York Times recently critiqued of contemporary ballets) its gang-rape scene, and confirmed by the Commissar (terrifically terrifying Sergey Volobuev) appointing her his involuntary concubine. Indeed, aside from loose references to details of Spessivtseva’s life, the ballet is a spectacle of extended violation, from her indoctrination as the ideally submissive woman by the “good” Teacher, her corruption by the “evil” Commissar (nicely staged as an inversion of the black swan/white swan dynamic in a pas de trois for Ballerina, Teacher, and Commissar), her momentary escape into the arms of an ineffectual Partner (Oleg Gabyshev), and her ultimate and inevitable descent into madness. In the meantime, the hoi polloi jig, Charleston and stage revolutions.

As the Ballerina, Abashova is a marvel to behold, particularly in the accelerated “Giselle” disturbingly set to Schnittke’s “Gogol Suite” that concludes the ballet, in which she relives her life as the innocent peasant manipulated by men of power. The radiance of the girl, the chill that pervades the stage from the moment she plucks the second petal of the portentous daisy, the heartrending horror of her mad scene all speak. When her Albrecht comes to find her after death, she is exhaled from a womb-shaped glasshouse, and the mist of the woods is replaced by a labyrinth of shifting mirrors into which she retreats—an ending as satisfying narratively as it is claustrophobically reminiscent of the studio in which it all begins. (Irene Hsiao)