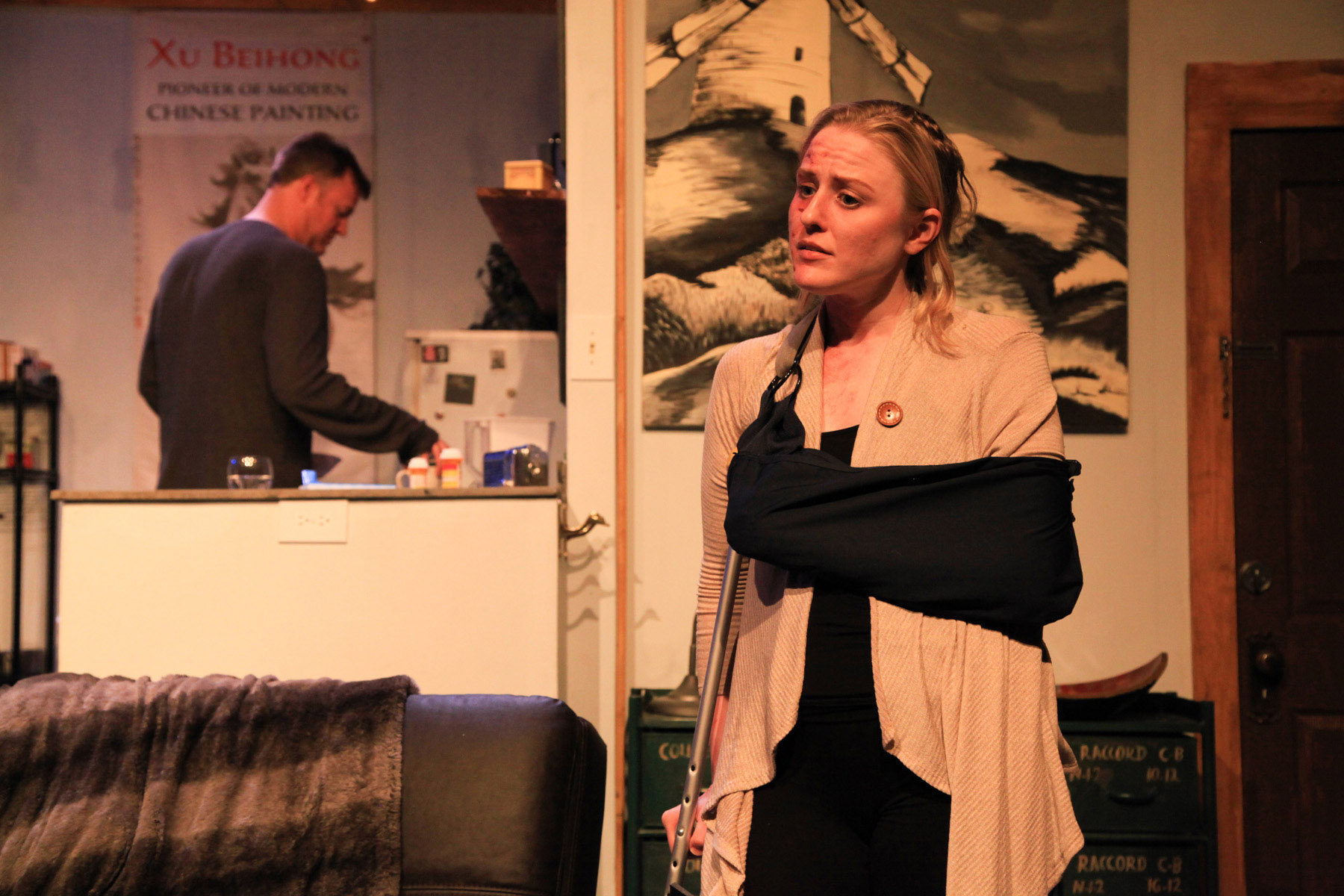 Mandy (Kirra Silver) is an event planner. “It’s boring,” she admits. She books venues, chooses the menu. She buys balloons that say appropriate, somewhat personalized things like “Welcome Home” and “Get Well Soon,” when she comes to your apartment for the first time. She likes ice cream and doesn’t drink.

“I’m into events, too—war, famine, genocide,” says photojournalist Sarah (Sara Pavlak McGuire), upon meeting this new young girlfriend of her editor and former lover, Richard (Rob Frankel). But the petty jealousies of ordinary lives are peripheral to Donald Margulies’ 2009 Tony-nominated “Time Stands Still,” a trenchant meditation on the trauma of witness and a study of the journalists who place themselves on the front lines to record stories most would rather not contemplate even from a safe distance.

The play opens with James (Robert Tobin) carrying Sarah over the threshold of the apartment they share in New York. It is not their wedding day. With a crutch, a leg brace, an arm in a sling and a face so scraped over with shrapnel you can practically feel it ooze, Sarah has narrowly escaped death from a roadside bomb in Iraq. Naturally, she can’t wait to go back. What’s two weeks in a coma, a year of rehabilitation, and the death of your translator/lover when there’s an ongoing stream of terror to be chronicled? Reckless or courageous, Sarah is called to document scenes of distress, arguing for her necessity (“If it weren’t for people like me, the ones with the cameras, who would know? Who would care?”) while acknowledging her limitations (“The camera is there to record life, not to change it”).

The others have reservations. James, a writer, has seen one atrocity too many. He wants to write about horror films instead of horror, get hitched and settle down. Richard gently encourages Sarah to shoot gritty dramas closer to home, perhaps the daycare at the local penitentiary? Mandy thinks it would be swell if they all had babies together. But Sarah has an artist’s compulsion—of her photos, she says, “I think they’re beautiful—but then, I’m their mother.” Pitting passion against the pressures of middle-class life, this is a social drama for our time. (Irene Hsiao)