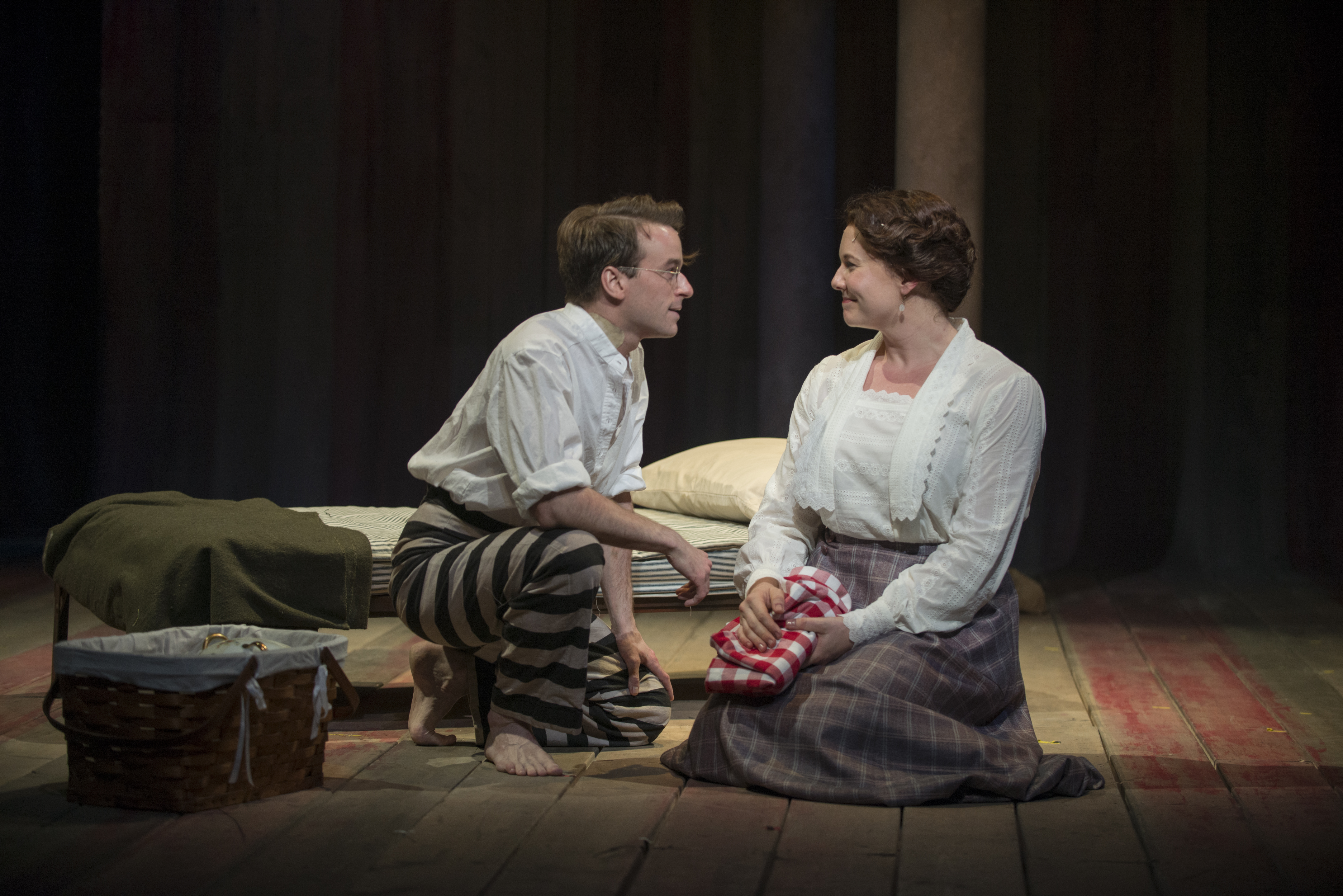 In the final scene of Writers Theatre’s production of “Parade,” Leo Frank (Patrick Andrews) is kidnapped from prison by a group of men (depicting the “Knights of Mary Phagan”). Moments before he is lynched, Frank recites the Shema Israel, the most important of all Jewish prayers. It is the first prayer taught to children, the last that is said before death, the first said in the morning and the last said at night. Though “Parade” is based on the true tale of a Jewish-American factory superintendent who was wrongly convicted in 1913 of the murder of a thirteen-year-old employee, it is unlikely that his captors would have allowed him to recite a prayer, let alone one in Hebrew, given the racial and anti-semitic events that surrounded Georgia at that time. This only makes his last scene all the more gripping and tragic.

Alfred Uhry’s book and Jason Robert Brown’s music and lyrics come to life and are made more complex through the ensemble’s musical prowess and Gary Griffin’s direction. The townspeople’s harrowing display of moral blindness through song, dance and choral hymn amidst persecution, tragedy and discrimination at once relieves and repulses the audience.

The sensation is uncomfortable, to say the very least. It is felt most strongly in Andrews’ sleazy and slimy depiction of himself in “The Factory Girls/Come Up to My Office.” It is felt again in Jonathan Butler-Duplessis’ stage-stealing portrayal of a maddened Jim Conley in “Feel The Rain Fall.” Most of all, it is felt in the final scene, when the Southerners perform an angelic hymn just after Frank is lynched.

Andrews’ performance is transformative, from his careful evolution of the principled and cold Leo Frank to the menacing pervert he is made out to be during his trial to the vulnerable yet strong man he becomes thanks to his wife’s determination to set him free. Brianna Borger’s (Lucille Frank) exquisite range (“Do It Alone” shook the hall) is only matched by her and Andrews’ stage chemistry, which develops naturally during the performance. This opportune love story, ironically enough, is able to materialize itself in art as a result of the hate crime that results in Frank’s death.

The show is based on dichotomies, on what is shown as black and white. It is difficult not to draw ties to current events and divides, to the seemingly monochromatic world we see through the lens of public opinion. (Danielle Levsky)

1 Comment
Inline Feedbacks
View all comments
Not So Black and White: A Review of Parade at Writers Theatre | Danielle Levsky

[…] wrote a theater review for Newcity Magazine on “Parade” at Writers Theatre. Click here to read my […]