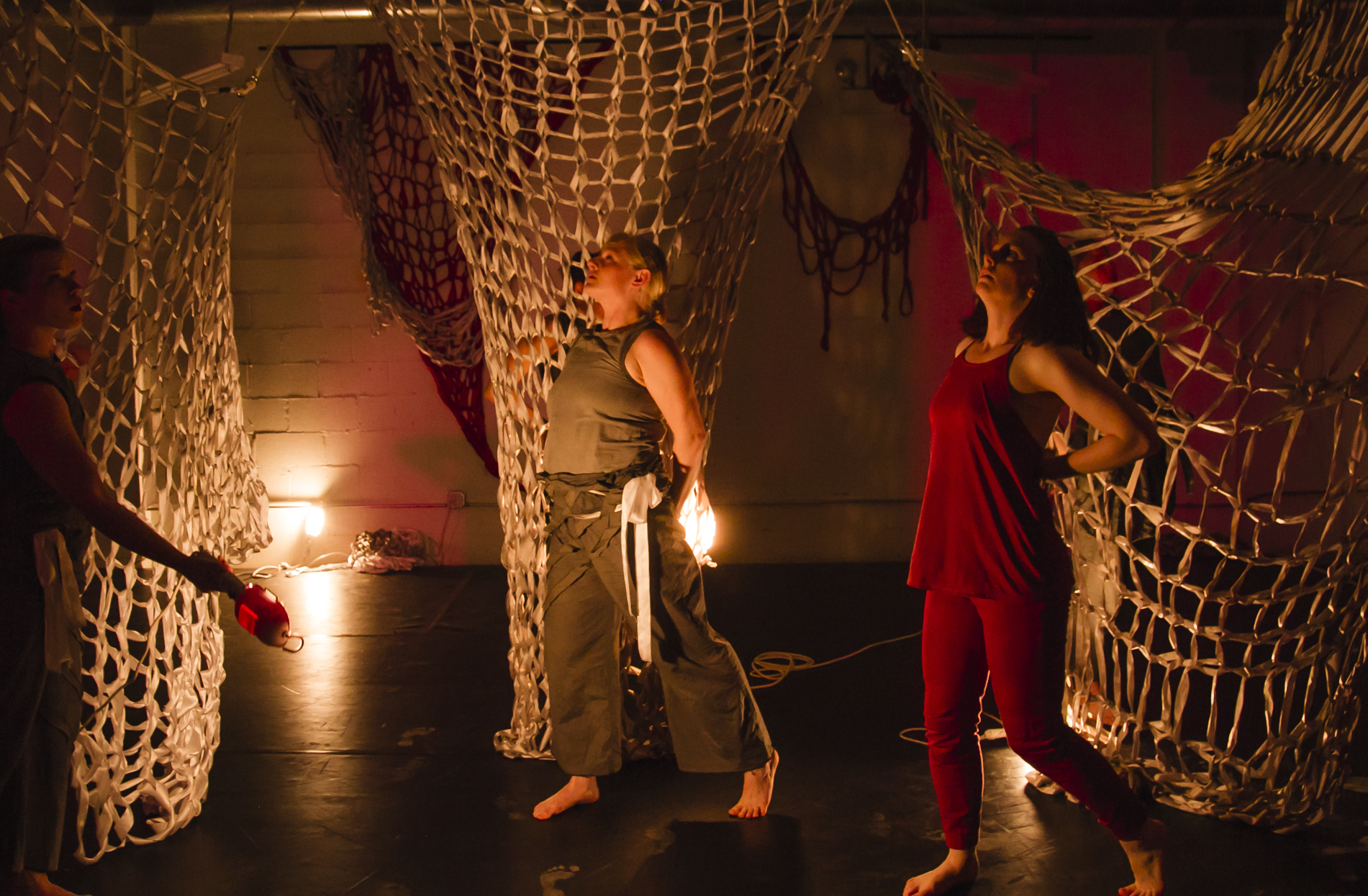 Choreographer Rachel Damon and her company Synapse Arts have been, for the last few years, exploring how making dance can be informed by making textiles, with dancers using their arms to weave large-scale objects that serve as set pieces, costumes and—in a grander sense—the physical evidence of an ephemeral activity. Damon has found the pairing of her interests as choreographer and crafter to be fertile ground for discovery inwardly and on the stage. She spoke with me about the evolution of the project and the upcoming performance of “Soften Every Edge” at Pivot Arts Festival Sunday, June 4, on a shared bill with Ayako Kato/Art Union Humanscape at FLATSstudio in Uptown.

There has been a progression of your work with textiles and dance over the last couple of years. Can you talk about how these two interests of yours came together?
I taught myself how to knit in college and it was separate from performance for me. In 2014 there was a trend of arm knitting as a way of making large objects quickly with raw roving wool. Needles got bigger and bigger—people would make them out of PVC—until they went to using arms as needles. I realized this stitching process was a choreography of the arms.

Creating textiles is a quieter, softer process for me; making dances also has a meditative quality, but it disappears; it’s less concrete in nature. These parallel processes of of cultivating dance and crafting converged. I’ve learned how to improvise with needlecraft and they’ve become inseparable to me. I see so many integration points between the two. Knitting is bringing a softer experience to my choreographic side. Everyone collaboratively makes objects and the movement comes from working with textiles.

That softness is the theme of this performance…
This weekend is “Soften Every Edge”; I was thinking about that as angular and how the process softens edges in that space. It feels like the world is violent and there’s a potent message of peace in moving and creating soft textiles. It’s surprising to me; it’s not a direction I thought I’d go in.

I used to be more politically fierce. Now I find I’m responding to jarring changes by first absorbing, then choosing to let go of what doesn’t serve me as an individual. I didn’t set out to spend the next five years learning where my internal strength comes from through knitting with my arms, but I’m learning through this process, working in the room with other women.

You mentioned that arm weaving was a way of making objects quickly. Knitting is a very slow process and, as you mentioned, dance exists exclusively in the moment. Have you had any reflections on time and duration in making and performing through this process?
Yes. When we make these large-scale textiles, we spend seventy percent of the time unraveling. We’re so hard on the textiles we have to remake them and we’re forced to let go of precious connections to objects. Knitting a sweater feels like a momentous gift; we got used to the feeling of making something and, at the end of rehearsal, it gets destroyed. Both dance and textiles get remade each rehearsal. And we’ve started to talk in textile terms in the dance environment. If we want to pull apart a phrase that didn’t work, we say “let’s frog it [term for unraveling in knit/crochet].” Warp and weft are terms for the vertical and horizontal threads in weaving and translate naturally to dance.

Oh yeah! And this language brings, again, a soft strength to a form dominated by vocabulary largely created by men.
Crafts were made by people to meet their needs. This is an explosion of what needlecraft is on a grander scale that elevates crafting to the level of art. It’s often demoted because it’s made by female hands.

And that fact that craft even needs to be “elevated”…I forget where I first heard this, but it keeps coming back to me; that men—Thoreau, Twain—keep journals, but women—Woolf, Nin—keep diaries.
I had an argument with someone about the term handiwork—they thought of themselves as an artisan, not a crafter. Why is macrame lesser than woodworking? It seemed more frivolous to them. Something grown out of the earth, rooted—that’s artisan. Light, airy materials were feminine, less substantial.

And interestingly, the magnitude of the textiles you create feel very monumental, architectural.
I’m glad you see that. I’m working on an evening-length piece for 2018 to be set in a historic landmark. I’ve sent a proposal to the Graham Foundation and this Pivot Festival performance is a seed for that.

And all the lighting for this piece is provided by handheld bulbs the dancers manipulate?
It’s an outcropping of my lighting design brain. It takes the intimacy up a notch, between the audience and the dancers and the dancers and each other. It’s another aspect of softness. There’s an oceanic element to it; the flow and drape of the fabric—it’s an otherworldly environment.