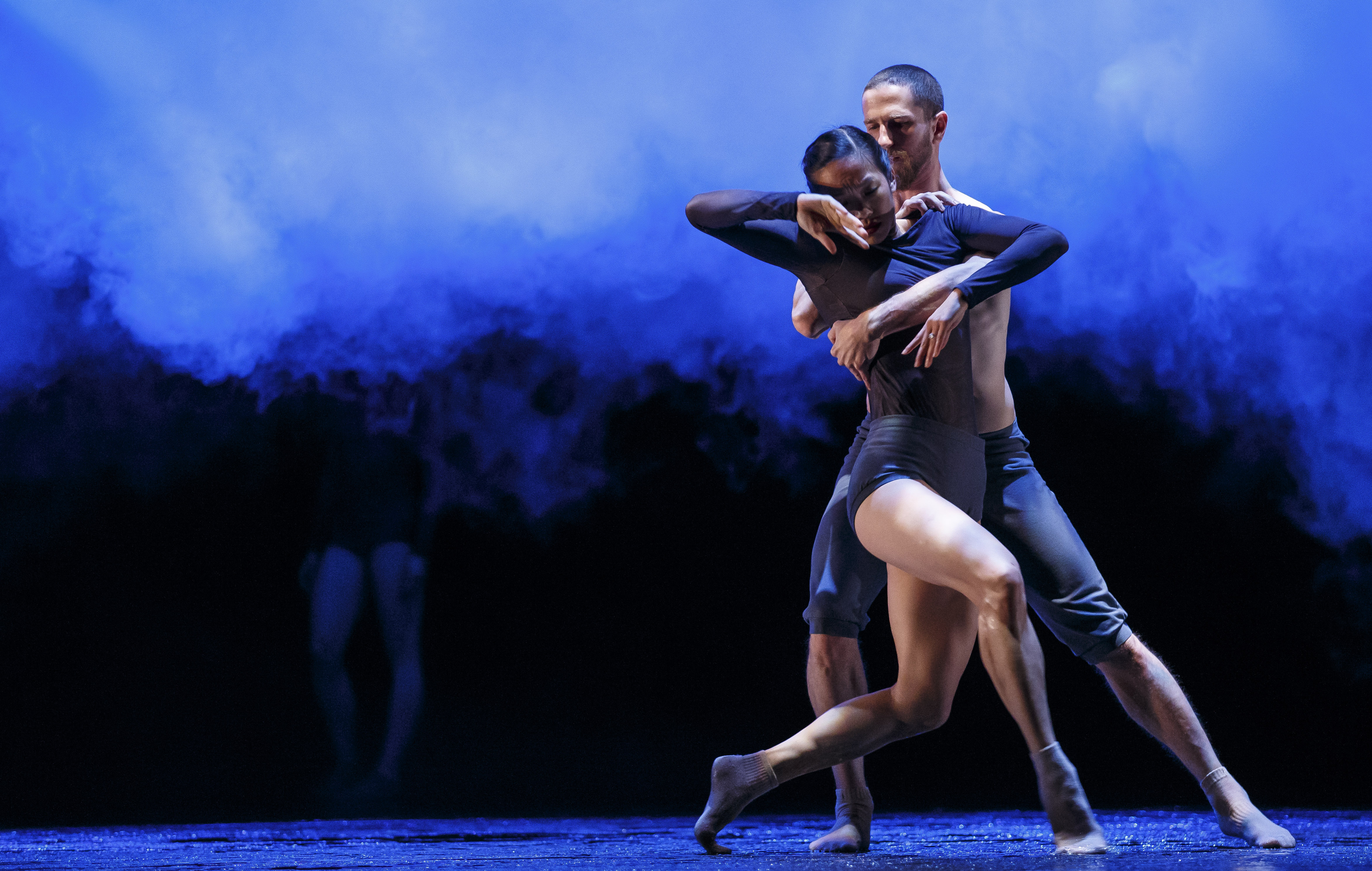 In the cool subterranean vault of the Harris Theater, Hubbard Street Dance delivers a celebration of their fortieth anniversary this weekend that is summertime in motion: alternately steamy, playful, romantic, jubilant, and all-in montage-length snippets perfectly suited for fevered, restless attention spans. The program was designed as a retrospective, with some rarely staged works from the versatile company’s vast and deep repertory. The result is a sort of greatest-hits evening and entry point for anyone skeptical about their ability to enjoy contemporary dance.

Eyeballs are grabbed immediately, the curtain rising on the duet from Lucas Crandall’s “Imprint,” performed opening night by Emilie Leriche and Jesse Bechard, both clad in nude briefs, an overhead spot casting defining shadows on every muscle and tendon. The piece starts quietly, hands grazing the surface of skin a few moments before the Bach score kicks in. The full piece premiered last year and the opportunity to see a reprisal by the extraordinary Leriche in the pas de deux, whose mind seems to live in her very fascia, is worth the ticket price alone.

Then, with no curtain drop and no pause, William Forsythe’s cool, mathematical “One Flat Thing, reproduced” explodes onto the stage, the full company dragging twenty metal rectangular tables into a grid that will serve as a defined plane for exhaustive geometric exploration. Exhaustive really is the right word; one need not know that each movement by each dancer in an increasingly complex, rapid-fire pattern is visually cued by a movement by one or more other dancers, to understand the piece is a feat of athleticism and precision. One movement missed, one beat off, and the elaborate house of cards collapses. When the company dragged the tables, running, back upstage and the curtain fell, the audience roared with applause.

Mood shifted abruptly again with an excerpt from resident choreographer Alejandro Cerrudo’s “One Thousand Pieces”—the first evening-length work for the company, created in 2012. The dance is inspired by Chagall’s “America Windows” in the Art Institute, but perhaps my mind was still out playing in the parks because the excerpt chosen, the “water section,” was reminiscent of bathers in a fountain. Dancers splash across a shiny black Marley floor, made reflective with a generous dousing of water. The slick sound of splashing feet is part of the sensory experience, low ronde de jambes kicking up spray, one dancer pulling another gliding across a floor slick as a slip and slide. It is at once poetic and playful, a dreamy evening mood settling in as the dancers retreat upstage beneath the hem of a low curtain revealing a heavy, blue-lit mist.

A section from “Palladio” by former artistic director Jim Vincent started the second act, easing us back into our seats with an elegant, romantic piece for two couples, followed up by another dramatic shift to “A Picture of You Falling” by the ingenious Crystal Pite. The solo, danced opening night with relish by Jesse Bechard, gives a taste of Pite’s visual wit and talent for storytelling through the body. Bechard, clad in a simple black suit and white shirt, falls again and again, the fall deconstructed, slowed down, rewound, popped and locked, to a score of mechanical sounds (doors slamming, locks clicking) and a female voice with an English accent narrating, or rather, directing the action. We understand this fall is metaphorical as well as physical without Pite needing to add any ungainly ponderous baggage to a deliciously crafted gem. Hopefully the cool wit of “Falling” gets folks geeked to see the upcoming program of all-Pite works next season. 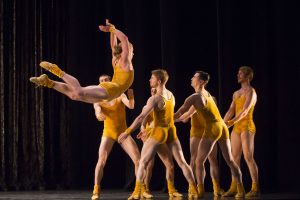 And then, jazz! Hubbard Street has made a reputation as a world-class contemporary company so it’s easy to forget the technical roots of the company include big, splashy extensions, spread fingers and audience-facing smiles. “The Golden Section” by Twyla Tharp, created in 1981 to music by David Byrne, is summer itself: thirteen dancers in gold leg warmers, short shorts and tank tops race across the stage in flashy leaps and lifts. Quadruple spins, splits, ponys, head bobbles and shoulder shimmies abound. It’s big, fun and sporty—a blockbuster film of a number and the commitment of the dancers to the spirit of the piece was absolutely winning. David Schultz’s flying horizontal leap into the arms of six other dancers, his equally golden locks flipping out behind him, is the stunt-man moment of the program.

The final two pieces are by Hubbard Street founder Lou Conte and wrap things up with easy charm. “Georgia,” a duet set to Willie Nelson’s rendition of the Hoagy Carmichael standard, was danced with a grace as easy as breathing by Jacqueline Burnett and Jason Horton opening night. The timelessness of Conte’s nuanced choreography matches that of the tune. The show closed on Conte’s “The 40s,” set to iconic “Opus Number One” by Sy Oliver (you’ll be whistling it all night, promise). In the program notes, artistic director Glenn Edgerton stated that he had been looking forward to staging the piece, created in 1978, for the company’s fortieth anniversary. The sweet, guileless nostalgia—an ensemble number with the jitterbug vocabulary of the day—carried the program to a close on a lighthearted note. One might say at a time when we need it most. (Sharon Hoyer)