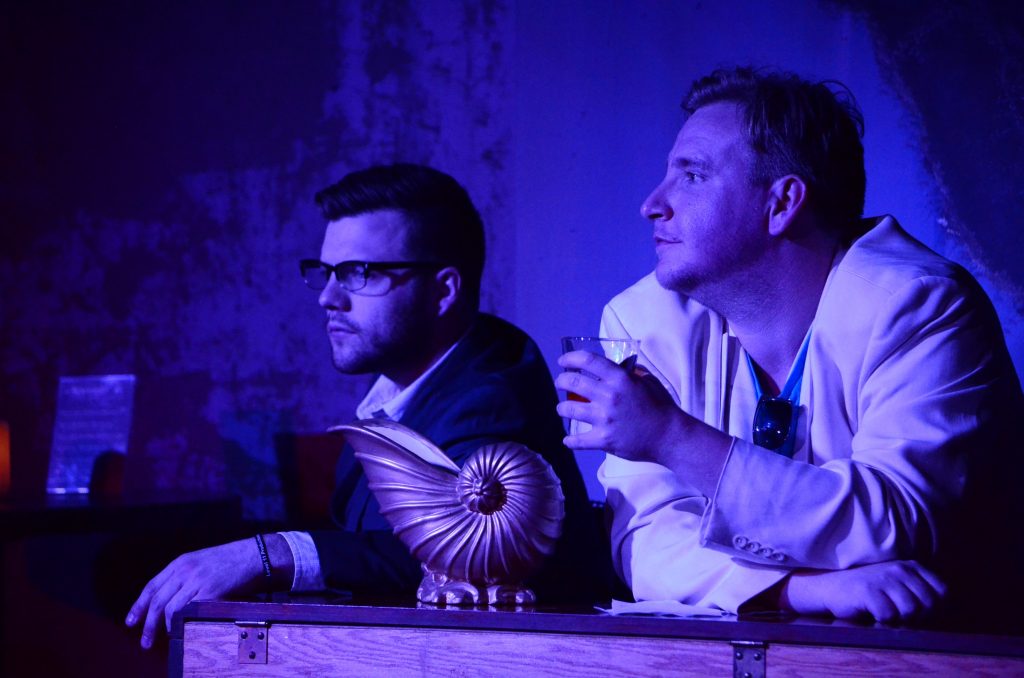 The Den is a rabbit warren of a space. A couple entrances lead to enclosures, big and small, densely filled with leather furniture where no one ever seems to sit. Halls and stairs zag off, sometimes to another stage and sometimes to a curtain or a piece of plywood that may have yet another hobbit hole beyond. Everything is brown—the chairs, the walls, the books—until you enter the second bar on the second floor, Finnegan’s, where the lights are blue and red, and you can sit anywhere except where it’s marked “reserved.” And the place is jumping, relatively. There’s a man at the piano (Alex Kliner) and another serving drinks (Armando Reyes), a lady in red at the bar (Manuela Rentea) and a bunch of other characters lounging around—what more do you need? You sit at a table with a little menu on it with cocktails named things like “Man I’m Hatin’ Mondays.” Then the torment begins.

The Wikipedia entry on “Nautilina” states, “The Nautilina is the last suborder of the Nautilida and the only nautiloids living since the end of the Triassic.” If Brian Foster’s play of the same title had been about prehistoric mollusks or contained a quarter of the poetry (subject-verb disagreement notwithstanding), it may have held more charm. Instead, it is an interminable series of disconnected monologues, each delivered like Bottom the Weaver on a methandrostenolone bender. That man (Logan Hulick) wants to fuck you! That woman (Sara Faye Richmond) saw some pigeons! Simone (Rentea) hates her job! Rod (Matthew Collins) wants to sell you something! The only respite is when Bar Patron 1 (Manny Ortiz) muses on how riding the El exposes the mystery of the universe and the minor being of man but even that speech dawdles many minutes past patience.

“This whole thing is ridiculous,” says Cassandra (DeChantel Kosmatka), an irate lover who inexplicably sprouts tulle from her arms partway through her sermon. “Who cares what they do with their short pigeon lives?” asks Faye. One thing is accurate—like drunks chattering, everyone is verbose, overwrought and overeager to tell you an unfunny joke about dicks. (Irene Hsiao)