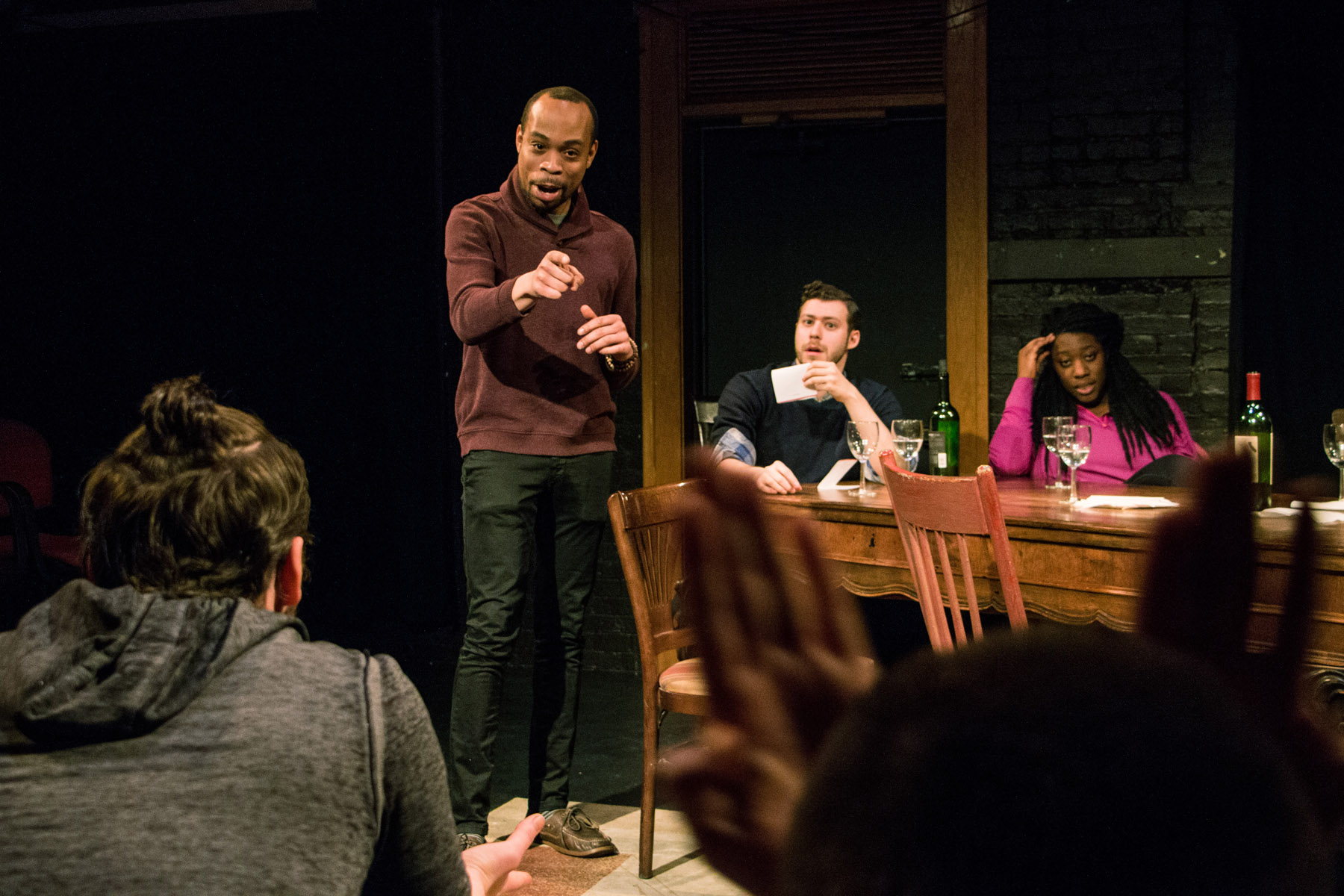 For five years, Broken Nose Theatre has been a fixture of the city’s storefront scene. Until recently, they were best known for Bechdel Fest, their yearly new-play showcase in which every show absolutely has to do one thing: pass the dang Bechdel Test.

But now they’re known for “At The Table.”

Written by Michael Perlman and directed by company member Spenser Davis, “At The Table” opened in February at the Berger Park Coach House to rave reviews, sold-out houses, four Non-Equity Jeff Award nominations and, most important of all, the chance to do it all again.

This summer, the company will be staging a remount at The Den Theatre in Wicker Park from June 29 through July 28. 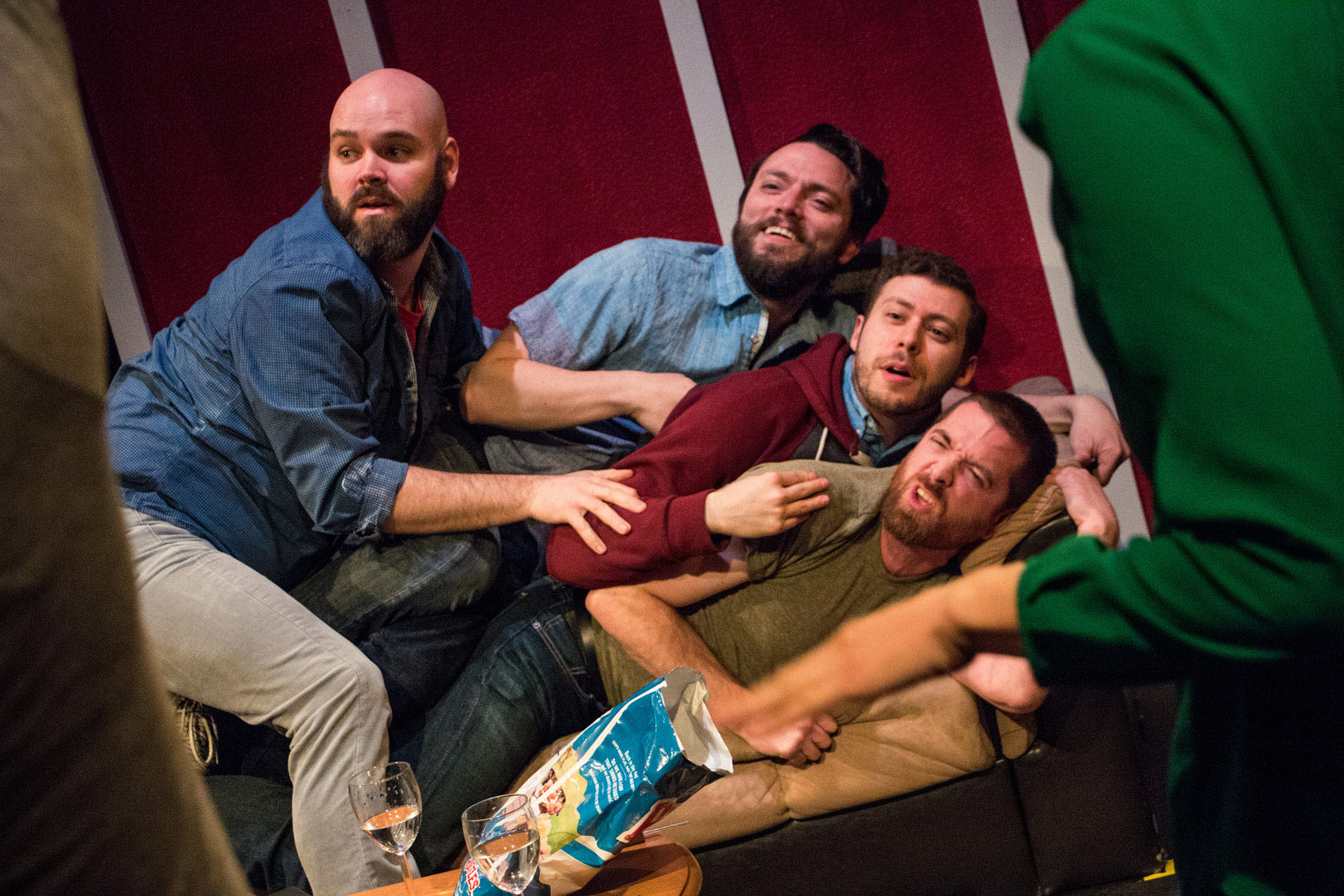 The play takes place over a pair of long boozy weekends taken by a group of four college pals, now in their thirties, alongside their friends and significant others. The freewheeling, often overlapping conversations turn to prickly topics like race, gender, sexuality, abortion, micro-aggressions, code-switching, etc. As the characters are forced to grapple with their own blind spots and prejudices, the group’s longstanding bonds begin to fray.

In addition to performing new work and Chicago premieres, Broken Nose is dedicated to the values of representation, accessibility and dialogue. In that respect, they couldn’t have found a better play for their first smash hit.

“I think ‘At The Table’ is probably the most Broken Nose show we’ve done, for many reasons,” says Broken Nose Theatre artistic director Benjamin Brownson. “It has the underrepresented voices and it’s also the most conversational show that we’ve done.”

The show is also accessible because of its pay-what-you-can ticket prices, an innovative model Broken Nose fully adopted last year and will continue to use for the remount.

“We have a firm belief that theater is something that everyone should have access to,” says Brownson. “And we realized that we would rather have twenty people see our show for five bucks each then five people see the show for twenty bucks each.

“One of the most exciting things, in the immediate aftermath of that switch, [is that] it allows us to, instead of constantly selling something to people, we are inviting them to an experience.”

The company’s relationship with Perlman began in 2014, when Spenser Davis directed a production of Michael Perlman’s first play “From White Plains.”

“The production really captured a lot of what I was proud of about the play and so I happily sent them ‘At The Table’ when I was working on it,” says Perlman.

“Immediately, I knew I had to direct it in Chicago when the time came,” says Davis. “The conversational overlap, with three discussions happening simultaneously, is something you don’t get to see onstage very often and I love that the dialogue almost requires choreography. I knew it would push me to be both hyper-specific but direct it in such a way that the ensemble felt totally lived-in as opposed to over-rehearsed.

“I also recognized that this was a play that dealt heavily with issues of sexuality, race relations, privilege… and I was a straight white cis-male born in Arkansas. I knew a huge challenge would be getting as many voices in the room that did not sound like my own, to make certain the show was as honest and accurate and respectful of all its depicted perspectives as possible,” he continues. 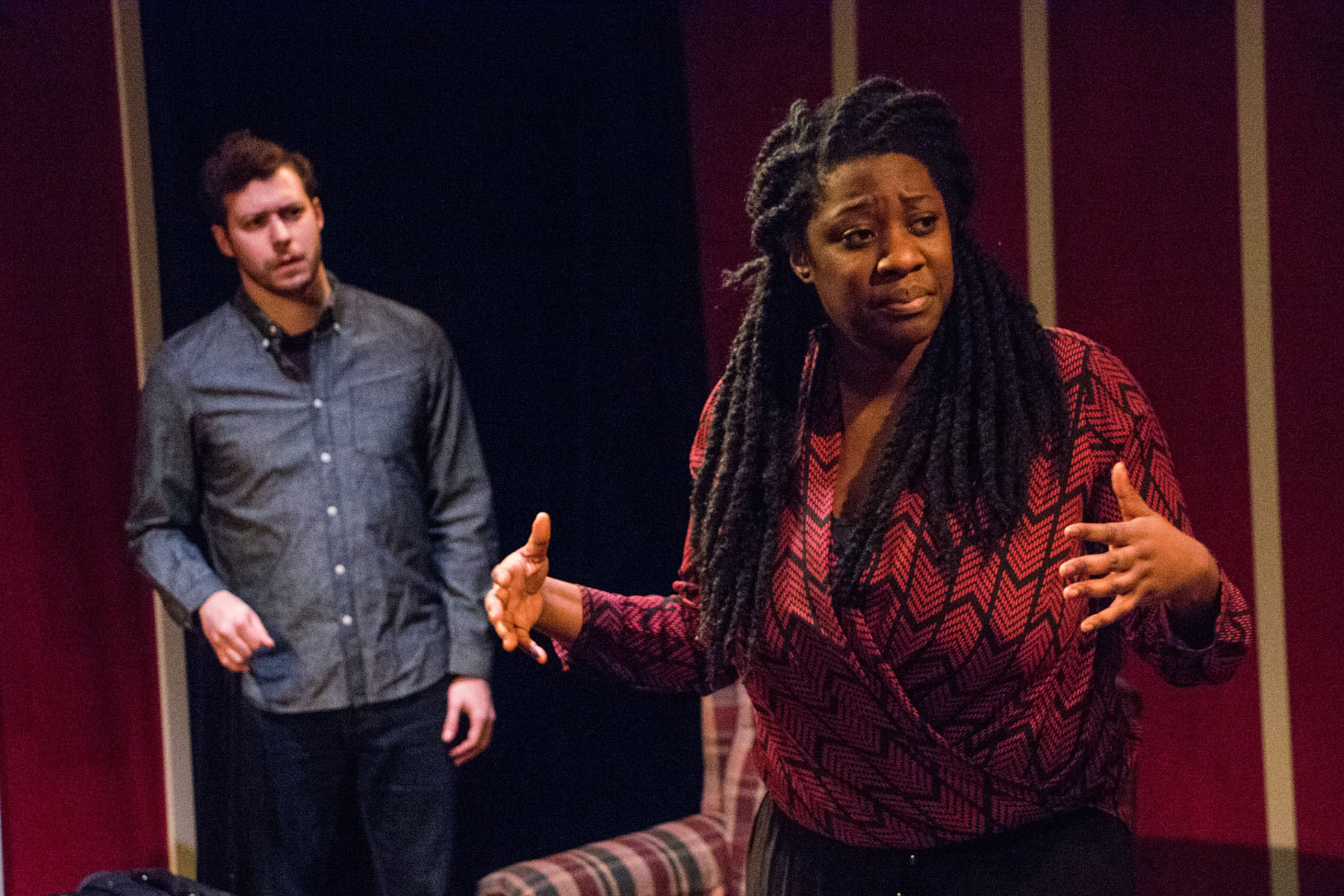 “Lauren was immediately relatable,” says actress Echaka Agba, whose performance as Lauren—the lone woman of color in the play’s main quartet of friends—earned her a well-deserved Jeff nomination for Best Supporting Actress in a Play.

“I remember reading the script and nodding emphatically from familiarity. Lots of ‘yes’ and snaps. I recognized Lauren and I working through very similar circumstances, shoulder to shoulder. And we will still be working through it for a long time to come.”

Perlman writes plays collaboratively, writing characters for specific actors and soliciting their input. After developing and premiering the show with actors in New York in 2015, Perlman then came out last December to work with Broken Nose’s cast too.

In the wake of Donald Trump’s election, his Obama-era show needed a slight update.

“I mainly rewrote the last ten minutes or so,” explains Perlman. “The original production was at a time where the issues discussed were simmering but since 2015 so many of these questions have boiled over so it felt important that the play reflect that.

“Without spoiling the play for anyone, there is a big eruption that happens in the middle of act two. In the original production, the tension came from the characters trying to move past that eruption as if it never happened, even though we all knew the characters would be profoundly changed by it. In the rewrites I did, there is no ignoring that eruption anymore—it must be dealt with.” 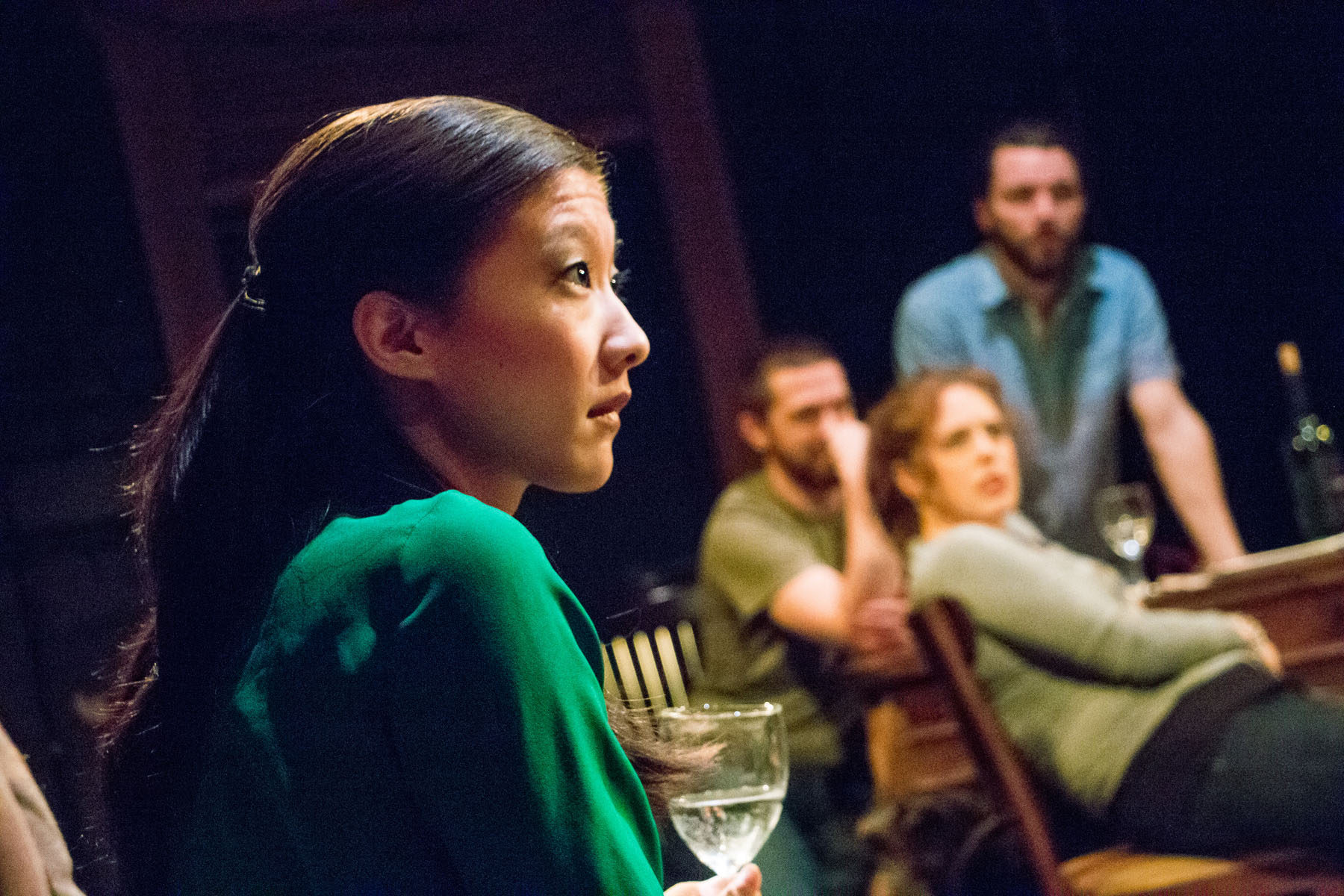 According to Davis, “We knew it could be special the moment Mikey delivered the new ending. It was raw and emotional and it took the play in a direction that was both painful and absolutely necessary.”

Once the play opened, audiences responded to those conversations in a number of different ways. Actor Johnard Washington described watching act two from backstage so that he could take in the audience’s reactions: “There was a little hole in one of the curtains, where, if you peeked through you could see the audience. I’m not in the second act, so I was always able to see reactions to the big blowups in the final two scenes and you can’t pin just one. Some women were clutching their pearls while others were nodding their head in approval. Some men had their arms across their chest and some would lean forward. I think audience members took each scene and reacted to the moments differently though usually always passionately.”

Cast member and Broken Nose company member David Weiss says that “After the show, it’s always interesting to see how people are as they file out of the theater: some really pensive, some buzzing and chattering and already starting to debate or discuss how they feel. I’ve seen what look like the start of many great conversations on the way out of the theater.”

When the show reopens this summer, associate artistic director Elise Spoerlein—also a cast member—is looking forward to having more of those conversations herself.

“In our last run at Berger Park, because they are a government-owned facility, we were literally kicking people out of the theater the moment the show closed because the park representative had to lock up by 10pm every night. So the fact that we won’t be racing out the door and actually being able to sit in the space and chat afterwards is going to be lovely.”

Meanwhile, Agba hopes that audience members are “having honest, empathetic and revealing conversations amongst one another. Real conversations that require courage where you get to hear firsthand how the person you went to see the show with really feels, regardless of however tough it may be to hear or say.

“Election day was a disaster. Superficialities will not cut it anymore.”