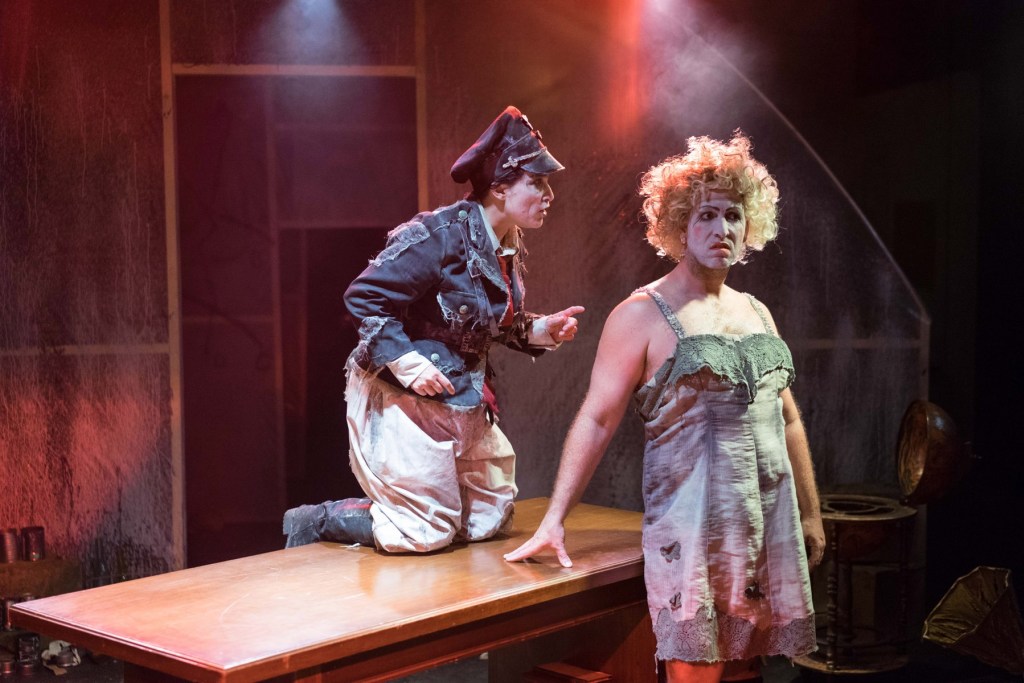 Edith Piaf’s “Non, je ne regrette rien” croons alongside a Nazi speech recording as the Nazi flag canopy is lit up by a red light at the start of “Hitler on the Roof.” At first, it seems like an odd choice but is quickly made relevant in Dr. Joseph Goebbels (Amy Gorelow) and Leni Reifenstahl (Jay Torrence), their perpetual confrontations and denials with their pasts in an endless afterlife. By the end of “Hitler on the Roof,” the audience is as emotionally ripped apart as the eternally doomed Nazis. And this is the ultimate strength of the show.

The intimate setting of the new Strawdog Theatre allows the audience to examine every detail, light twitch and sweat droplet on stage, yet the entire production crew and cast make it all look effortless. The combination of playwright Rhea Leman’s powerful monologues and dialogues, the intense co-direction of Kirstin Franklin and Amber Robinson and overwhelming set design by Chad Eric Bergman come together with knockout performances by Gorelow and Torrence.

Gorelow and Torrence transform into their respective dark, insanity-inducing roles while beautifully incorporating humor and slapstick. Susan Fay’s choreography and Rick Gilbert’s violence design play in an artful and natural way, utilizing and arranging every inch of the space of the theater. The history and messaging that the two actors relay to the audiences, and eventually to each other, at once educates the audience and reveals the fine line between sanity and, as Reifenstahl puts it, “losing it.” They command the stage, they grasp the audience with everything they have. One scene has the audience cringing as they witness the degradation of both characters’ minds; the next scene has the audience induced into a fit of laughter as Reifenstahl searches through hilarious facial and physical expressions for Goebbels’ proper title. The pair’s cat-and-mouse-like chemistry is hard to match.

Timely as it may be, Leman wrote this piece in 2011 during a rise of Danish/European nationalism. In her script, Goebbels reminds us how propaganda can be peddled as art, and that the first rule of propaganda is to repeat something enough times until it becomes the truth. (Danielle Levsky)