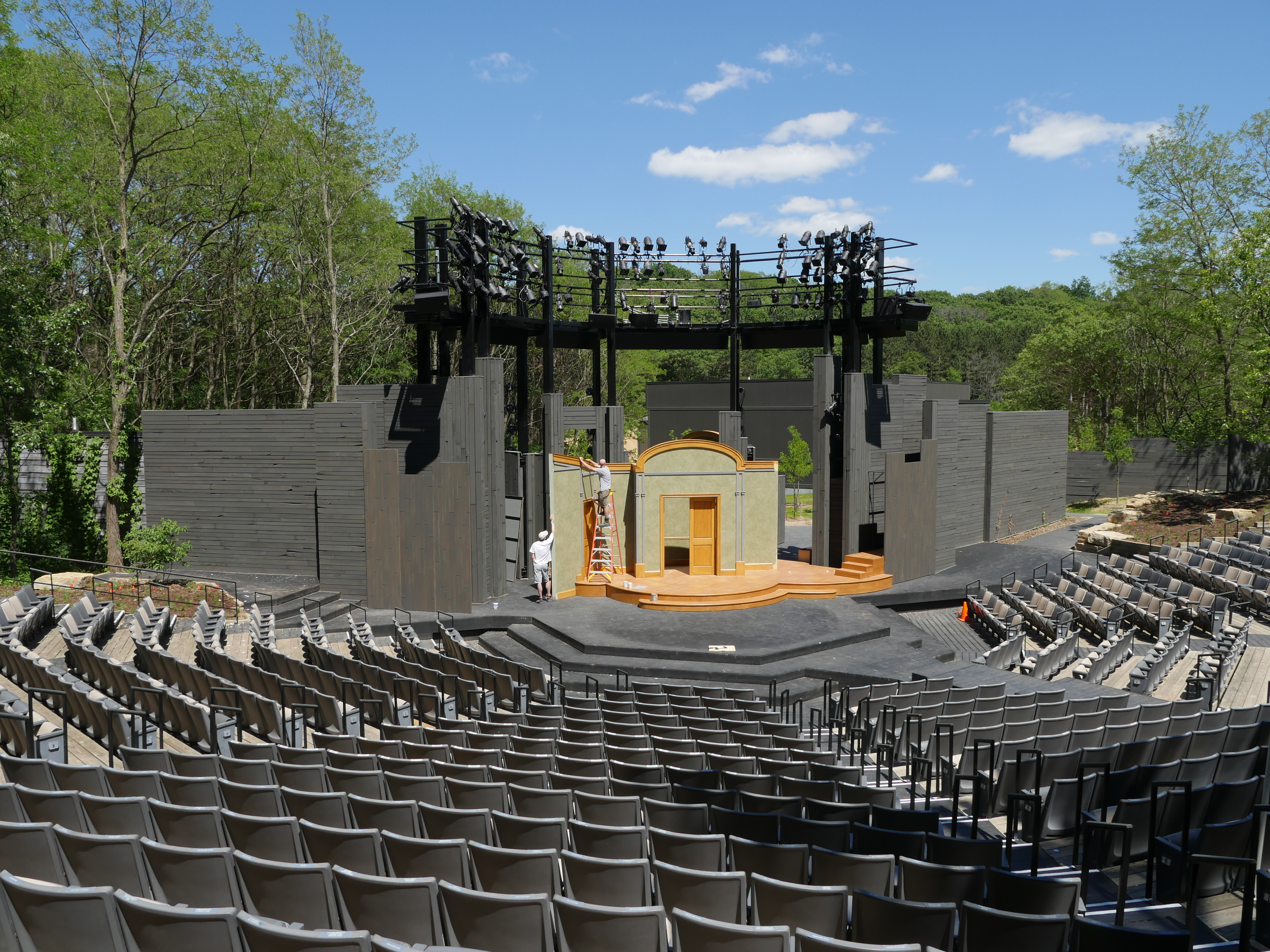 APT crew working on the set of “A Flea in Her Ear” on the newly remodeled Hill stage at APT. / Photo: Chris Giese.

While we associate beach reading with trashy novels and serious music makes way for catchy but banal pop songs, summer theater is dominated by the highbrow plays of one William Shakespeare. Options abound for Bard bingeing under the stars, from the Chicago Shakespeare Theater’s “In the Parks” series, to the Oak Park Festival Theatre to First Folio in Oak Brook. But few operations in the world compare in scope and commitment to American Players Theatre (APT) in tiny Spring Green, Wisconsin, a few hours northwest of Chicago. Michael Lenehan, the longtime former editor of the Chicago Reader, has been visiting the region since 1982 and recently penned a book chronicling the theater by following a single production from beginning to end.

I asked the author of “Much Ado: A Summer with a Repertory Theater Company,” why is Shakespeare a summer “sport”?
A simple fact of theater economics is that to do Shakespeare big, in something resembling the way it was originally done, you need a lot of actors, and to pay them you need to fill a lot of seats, and that takes you outdoors into big theaters.

But it’s interesting you use the word sport. As I looked at the history of APT, and their place in the Shakespeare world, I kept thinking about that hoary old line from the baseball movie “Field of Dreams”: if you build it, they will come. It certainly seems to be true in the case of classical theater. You look at the big summer festivals—the Stratford and the Shaw festivals in Canada, Oregon Shakespeare Festival, Utah Shakes, APT—these things draw thousands and thousands of people to places that are otherwise tiny. And that seems odd to us, because we tend to think of theater as something that thrives only in population centers and around universities. And from there we assume that theater needs a sophisticated, well-educated audience.

But turn it around: what if theater happens not where the audience is, but where the actors are? I mean you don’t need to be sophisticated to understand what’s going on in “Macbeth,” or “Death of a Salesman” or “Glengarry Glen Ross.” These stories can move anyone, and they will if they’re presented by actors who have the skills and the passion to put them across. The people standing in the pit at the old Globe theater were certainly not sophisticates. Shakespeare was popular outdoor entertainment—like baseball.

When I went to APT I told them I wanted to see how they make the magic. And if you asked me what’s the biggest thing I learned there, I’d have to say it’s how much of the magic comes from the actors, as opposed to the playwright or the director. Many of the big moments in this production of “Much Ado” came straight out of the actors’ heads and sometimes out of their bodies. And I’ve since watched other actors at work and seen the same thing. You can’t see it sitting in an audience, but in the rehearsal room you can watch it happen. It was a huge revelation, and I came away awestruck by the actor’s art.

So I’m no longer surprised that a troupe of dedicated actors can put down anywhere and draw a crowd. That’s certainly the way APT got started. You go back and read the press accounts of the company’s beginnings—here’s Randall Duk Kim and his little band of high-minded idealists trying to establish a world-class theater company in a rural Wisconsin town of fewer than 2,000 people. It seems so preposterous! But more than thirty-five years later here they are, the “best classical theater company in America,” at least according to one critic. There’s a lot that goes into that, of course, including money and marketing and a lot of luck, not to mention the growth of Madison, where about half of APT’s audience comes from. But first and last it’s all about the actors. And I’ve come to believe that where actors go, people will follow.