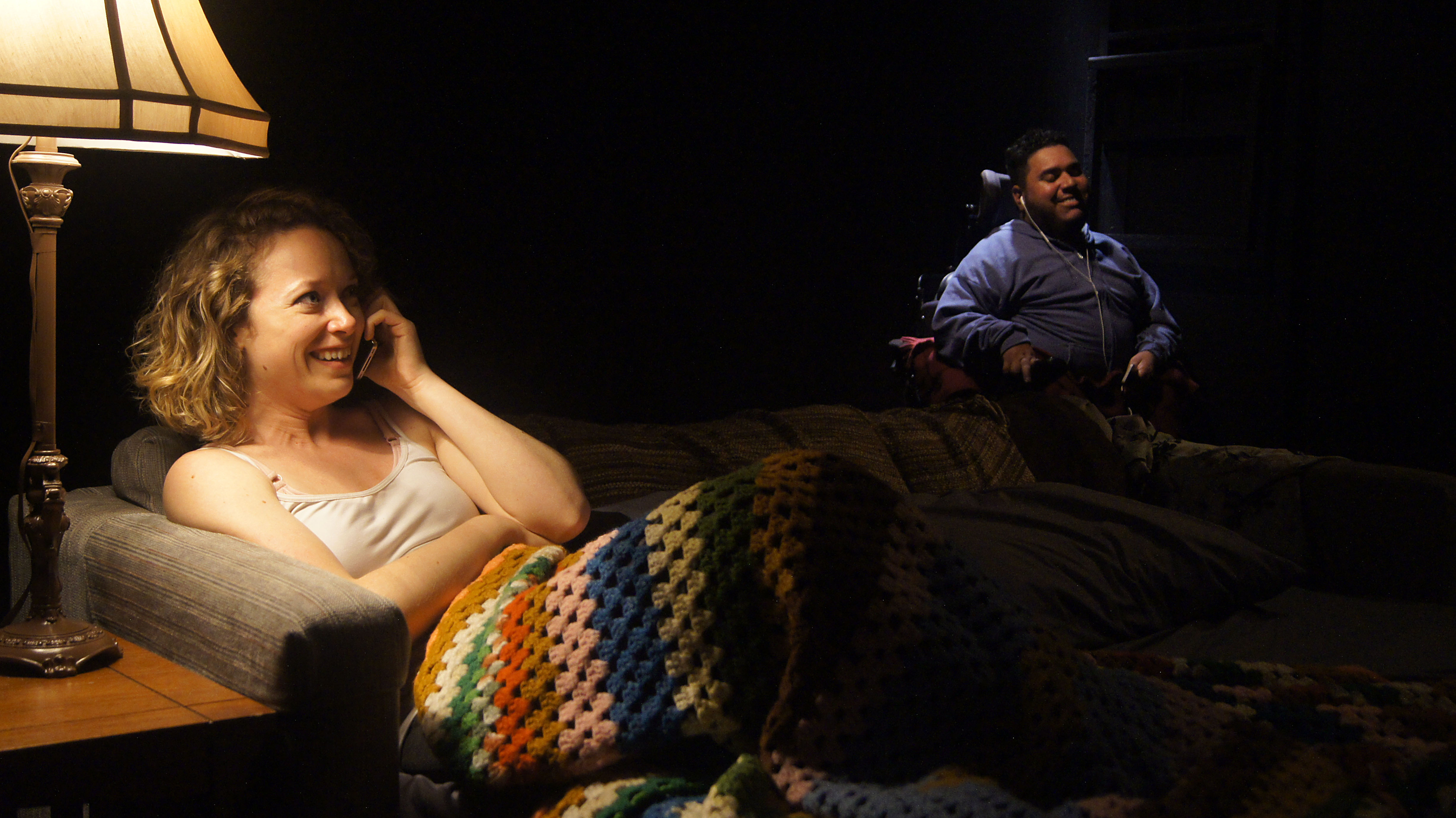 As Bekah Brunstetter’s play “Going to a Place Where You Already Are” begins, Roberta and Joe, two dyed-in-the-wool atheists, exchange sarcastic comments as they suffer through the church funeral of a workplace acquaintance of Joe. Trying to sum up his deceased wife’s life in his eulogy, the offstage widower does the best he can, ending with, “That woman could bake.”

It’s a funny-sad-real moment, pointing to the play’s subtext: the inability of postmodern, technology-addicted humanity to deal in any meaningful way with mortality. In a relentlessly positive and pragmatic culture, death remains the big bummer, the lemon that can’t be turned into lemonade. Death for us is not only tragic, it’s downright awkward.

In the world of “Going to a Place,” death—like religion—is treated basically as a bad joke, until it confronts Roberta in the form of late-stage cancer. Not only is she dying but she’s also having visions of eternal bliss, complete with a youthful and somewhat anxious angel (Collin Quinn Rice). “There’s been a mistake,” insists Roberta to the angel. “Neither my husband nor I believe in heaven.”

But the visions recur, to the exasperation of her implacably rational husband, who cloaks his denial in endless busyness. Roberta’s sudden atheistic apostasy also affects her step-granddaughter Ellie, an unhappy, commitment-phobic millennial (played with twitchy intensity by Abby Dillion) in an ambivalent relationship with the physically challenged but emotionally solid Jonas (Joel Rodriguez, who gives his all to this sympathetic but static part).

The first seventy-five minutes or so of this ninety-minute, sans-intermission play flow nicely, as Kathleen Ruhl, an actress who defines the concept of stage presence, draws us into Roberta’s initial perplexity and growing sense of confidence and acceptance. Director Matt Hawkins gives a tangy, lifelike quality to the interplay between Roberta and Art Fox’s Joe, as the couple struggles not only with impending loss but also with Joe’s dawning realization that he doesn’t know his wife at all—and that she knows him all too well. The couple’s pointed and passionate dialogue succeeds as both character study and drama of ideas.

Unfortunately, the final scenes disrupt the play’s delicate structure. Tension gives way to sentimentality as Roberta nears her reward and heaven—looking like a set from an Olsen Twins TV special—is revealed. It’s pure syrupy wish-fulfillment, which confusingly seems to confirm Joe’s position on faith while simultaneously contradicting it. The bottom-line lesson to be drawn here is that in drama, as in life, endings are never easy. (Hugh Iglarsh)