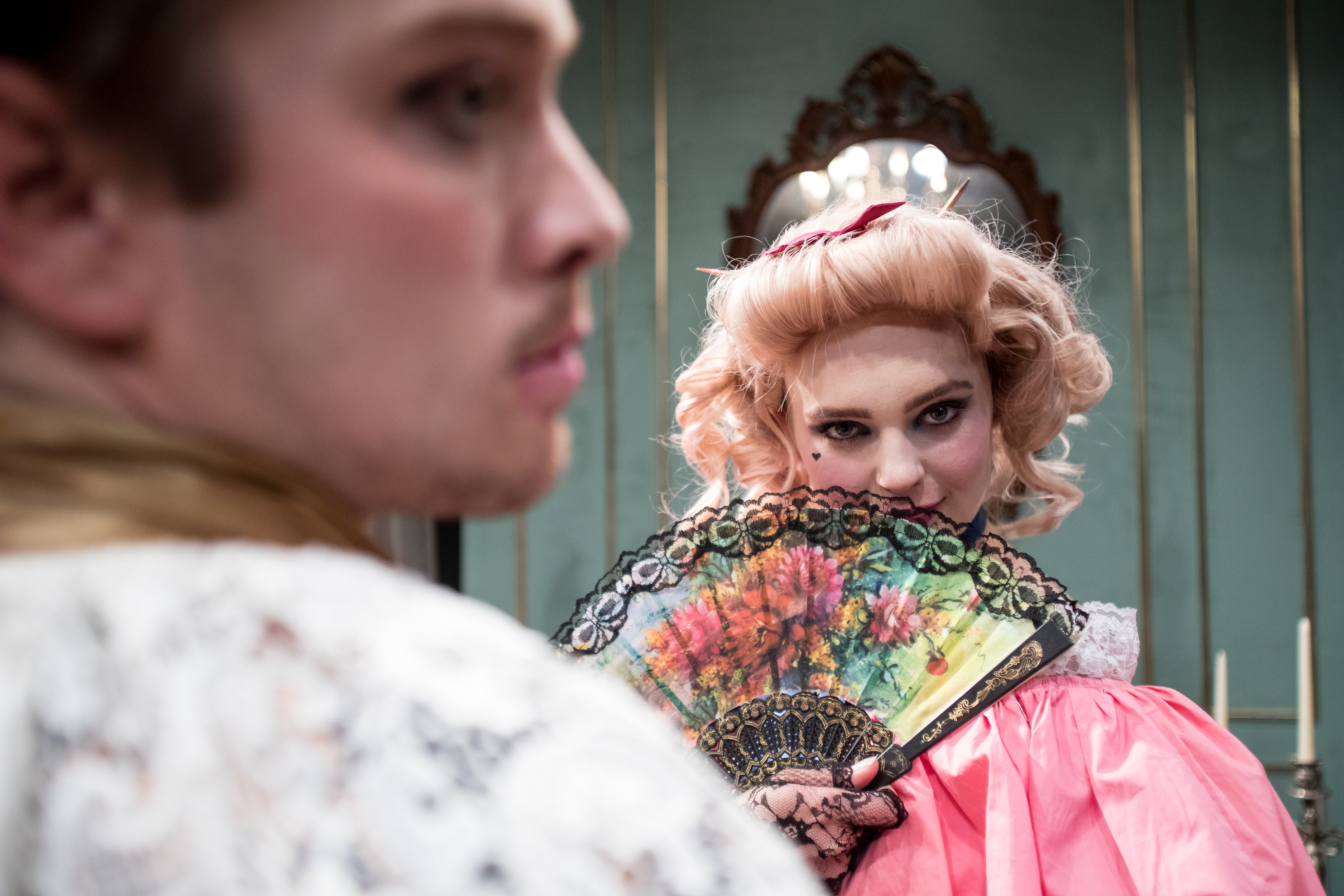 Outside The Artistic Home’s theater, a flyer advertises courses in Meisner technique, which describes acting as “living truthfully under imaginary circumstances.” Mere feet beyond its storefront entrance awaits the blue and cream and curlicued salon of Celimene, where no one politely goes without a corset—the color’s up to you.

Helping themselves liberally to the candy and booze are friend Philinte (Julian Hester), poet Oronte (Todd Wojcik), marquis Acaste (Averis I. Anderson) and courtier Clitander (Ted James). The lady herself (Annie Hogan, with her bosom pushed up to her throat) makes a late entrance—fashion, you know. Everyone is powdered, painted and wigged like Cosmo doing commedia dell’arte for the summer look of 1666.

“The School for Lies” is Molière’s “Misanthrope” reimagined by the nimble pen of David Ives, one in his series of heroic verse “translaptations” of French plays. Frank (Mark Pracht)—dour, sour and glowering—is the interloper in this delightful imaginary circumstance. Clad head-to-toe in black leather and unsightly as a blotch of asphalt upon a glittering mosaic of rainbow tiles, Frank is determined never to tell a lie, not even to make a minute minutely more delightful. For some reason, perhaps because a flash sale on sequins has made shiny things too common, Celimene, her chaste cousin Eliante (Brookelyn Hebert), and her clown-faced rival Arsinoe (Devon Carson) are immediately besotted with the grump. Were it not for this fly in the ointment, this raisin in the confection, this wart on the pedicure, Ives’ play might have been the pastel pastry party interrupted by down-low rap gossip sessions you didn’t know you pined for.

But Frank. Oh, Frank. Frank wants to be honest, which in dull parlance is just plain mean. He sniggers at Oronte’s poem, which rhymes “Phyllis” with “bacillus.” He sneers at Philinte, who tries so very hard to like his loutish pal. This is why we can’t have nice things with our serious literary adaptations—we want to see the feather and lace set have it out and instead we’re stuck with the narrative of the boor. Why live truthfully when imaginary life seems far richer? (Irene Hsiao)