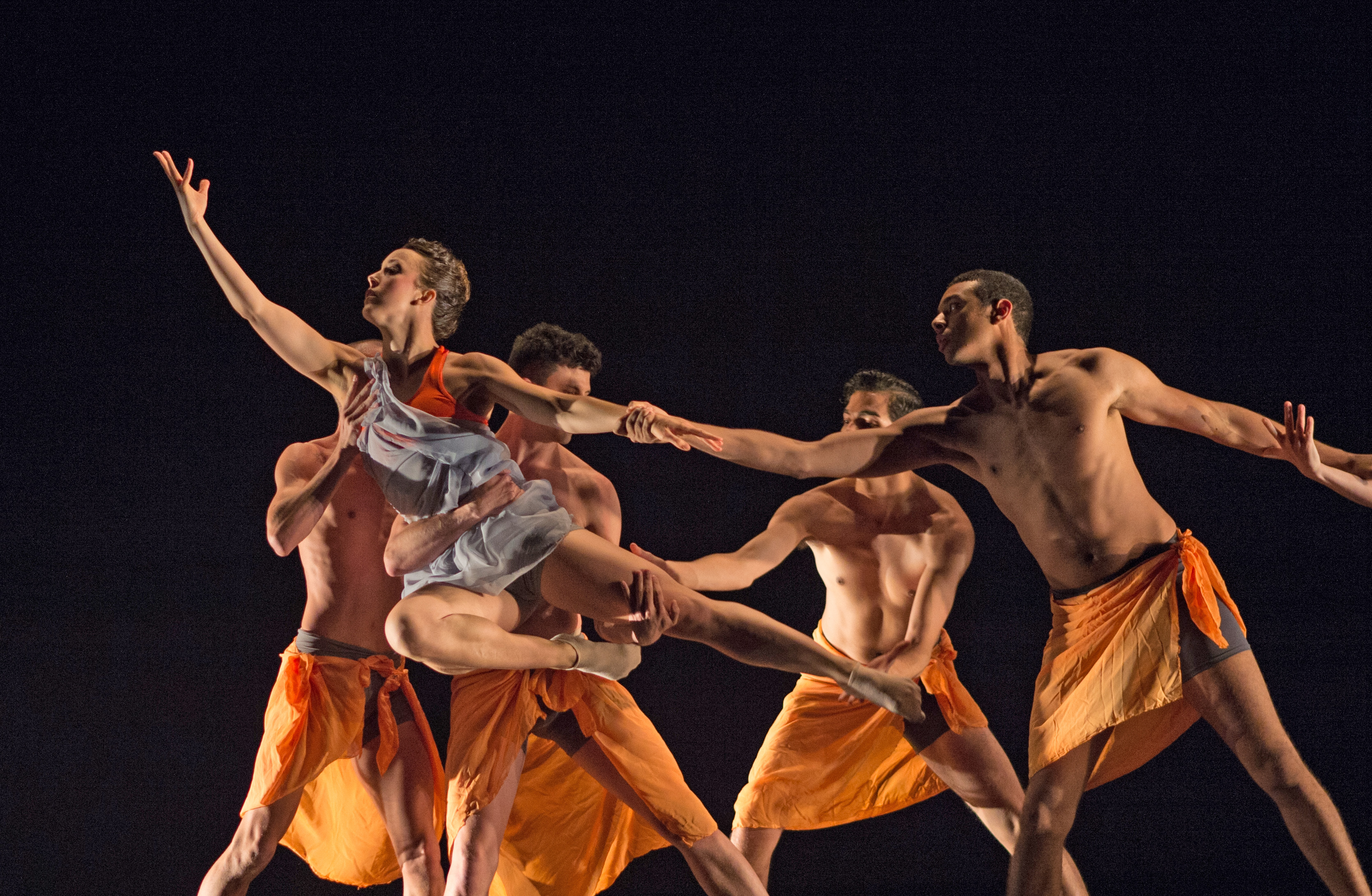 This year’s “New Dances” from Thodos Dance Chicago marks the end of an era. Earlier this year, Melissa Thodos announced that her twenty-five-year-old company would become project-based, and would no longer keep a regular ensemble of dancers. Thodos stated an interest in finding someone to take over the “New Dances” program, which for the last seventeen years has incubated new choreographers within the company, giving them the opportunity to cut their teeth on full-production dance-making, with access to rehearsal time with fellow company members, lighting, costume and sound designers, plus two feedback sessions with a panel of established professionals in the field. And let’s hope someone is found to pick up, wave, (and fund) the “New Dances” banner quickly; the performance at the Athenaeum Theatre July 15 and 16 showcased an array of promising young talent who earned a spot on the big stage.

Highlights of the program included the opener, “Reception” by Thomas Jacobson, which set a sweetly nostalgic tone at the start, a small boombox sitting on the stage and the first notes in the theater the strains of Burt Bacharach’s “Raindrops Keep Falling on My Head.” Jacobson shifts moods as songs change (with a little radio static between and dancers change the dial), one notable moment his treatment of “Clair de Lune,” when one dancer walked through a grassland of gently extended legs. The connecting thread was tender melancholy, an appropriate note for an audience seeing this arrangement of dancers for the last time.

Jacobson’s piece was the perfect bookend to Hattie Haggard’s ode to her home state of Texas: a deadpan, wryly humorous ensemble number set to iconic cowboy songs as sung by Gene Autry, Syd Masters and Marty Robbins. Haggard’s “Ranch Dressing” lived up to the punny title and, with the exception of a visual gag that appeared one too many times (to “Cool, Clear Water”…you can probably guess), Haggard successfully found the evasive mix of lightly ironic humor, sincere affection and clear physical language critical to making a piece like this fly. Eight dancers spun thunderously together across the stage, knees bent during “Ghost Riders in the Sky,” ending the piece with high energy and a final-note-punchline that elicited a burst of enthusiastic applause at the close of the show.

One of the strongest pieces came from Jessica Miller Tomlinson, who has been building a name for herself as an independent choreographer over the last several years, having made works for Visceral Dance, Dance in the Parks, and most recently the “Dance For Life” fundraiser coming up in August. The maturity of her voice stood out in “Berseluk-Beluk,” an ensemble piece featuring lyrical, complex partnering and a stunning moment where the nine dancers form a living sculpture, inspired by Tomlinson’s visit to Bali.

Other promising new talent includes Luis Vazquez, a highly skilled and expressive dancer whose influence from his studies with Alonzo King LINES and Hubbard Street—and Alejandro Cerrudo in particular—are detectable in his “Siren,” a moody ensemble work in gray-scale costumes and backdrop. Vazquez uses the floor well, keeping his dancers low to the ground and seamlessly fluid; circular lifts ended in second position, knees bent, landing on soft cat feet. And Alex Gordon’s tender and strange “Amour Devorant” was danced beautifully by six women and one man; it hinted at the dark, animal, internal world our romantic partners can never know. At moments Gordon’s reach may have exceeded his grasp—and he certainly wasn’t alone amongst the eight young choreographers on the program—but witnessing the raw, ambitious, passionate, imperfect budding of new artists is one of the great pleasures of the “New Dances” project. Thodos has provided a great service to her company members and the dance scene in Chicago; let us hope the project continues for many years to come. (Sharon Hoyer)