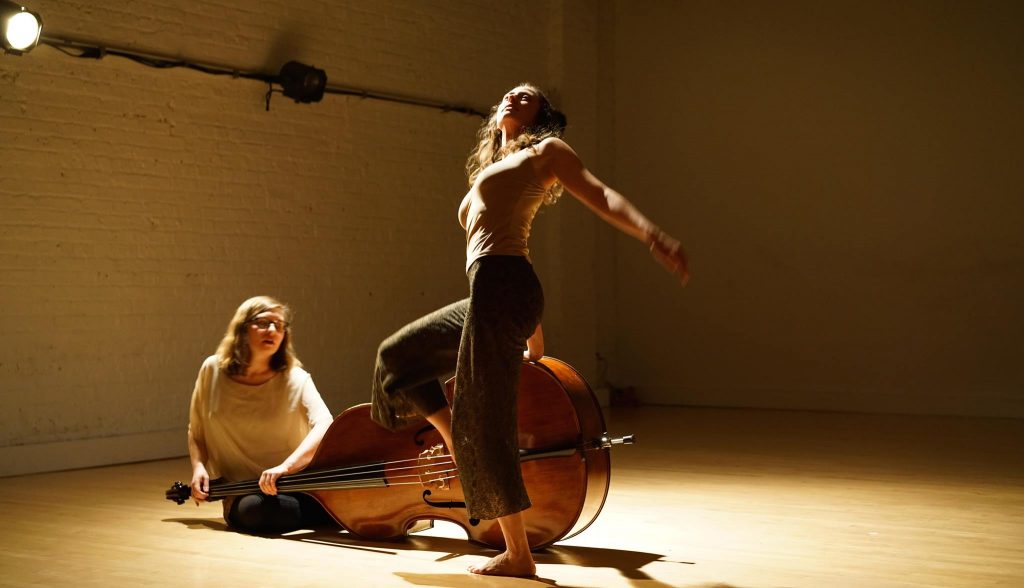 So many dance performance series in Chicago offer little curatorial frame, whereas “Set Free” aims to a specific outcome: provide its audience the experience of a “progress in performance.” That is to say, with each monthly installment, the idea is that audiences will see the creative process unfold, iteration by iteration, with each step along the path to fruition serving as its own stand-alone event, leading up to a final weekend performance. As explained by series progenitor Jessica Marasa (and also now, with Butoh Chicago, the leaseholder and operator of the OuterSpace rehearsal and dance studio in Wicker Park), the “set” part of the series title refers to the finished dance, set or finalized each evening as part of a movement score, with the “free” referring to the improvisatory movement of the evolving work. Thursday night’s opening of “Set Free” was headlined by Marasa who, with collaborator Katie Ernst, presented a duo titled “Evergreen,” alongside a solo excerpt from J’Sun Howard’s “Working on Better Versions of Prayers,” danced by collaborator Dedrick “Deddy Banks” Grey, with lighting design for both by Giau Truong.

Howard’s excerpt was the highlight, a serene, introspective piece of chambered movement in the spotlights to “Moonlight Suite” by Nicholas Britell, drawn from his score for Barry Jenkins’ Oscar-winning movie. Succinct at a spare fifteen minutes, poetic and darkly charming, Howard’s choreography was repeatedly shot through with bright flashes of fleeting brilliance, breathlessly executed by Grey. Coming on strong throughout, moving his black-clad, lithe black body through a series of evocative movements that culminated in succinct moments, much of it danced facing away from the audience. There seemed to be a tension between ground and heights, at one point Grey rolling his shoulders in half-hunch, arms curling out astride his frame as if a bird prepping for flight. Then, in an instant, and with a snap of his fingers, a large white orb burst into celestial light upper stage right, quickening the tension between ascent and descent, a presence above the fray of the terrestrial gesticulations occurring below. Grey’s looming figure, lit by the orb and the action onstage re-centered to it, took to moving beneath it, arms reaching, flailing, attempting to catch its compass, reliably failing. It opened a pattern in which the dancer built a tempo of energetically swinging his arms, jumping, leaping, desperately trying to reach out and achieve contact, each time failing again and again until, falling flat to the floor exhausted and succumb to gravity, the lights go out and he falls in darkness.

Between “Prayers” and “Evergreen” was an improvisation by Keisha Bennett, dancing to saxophone by Keefe Jackson, called “Untitled Opening.” Sax rising up out of the dark room, Bennett appeared in the opposite corner, hands planted one atop the other on the floor, rotating her body around the axis. In the center of the room sat a row of blue chairs with polished steel legs, almost resembling a schoolroom row. As it continued, movement responded to the stochastic saxophone’s breathy gusts and brassy moans, musician lingering on his exhalations, fingers loudly tapping the valves, as Bennett slowly climbed the chairs, carefully one by one balancing her body’s weight across the tops of the chair backs, each time threatening the danger of a collapse and fall, each time successfully navigating the threat until she climbed all three, her whole successfully balanced across them. It was a stressful moment until, in a controlled collapse to the floor, she voiced the only line of the performance, saying aloud, “I’m not over it,” auguring some distant imprint of a lifetime long gone.

Asked to vacate the room for intermission, audience members returned to a room with the risers void of their folding chairs except the top row, three white-clothed pedestals adorned with pine branches and a large upright bass leaned onto its side, each situated roughly into the room’s four corners. During the opening sequence, Marasa and Ernst sat cross-legged astride the bass, picked pine cones from a wicker basket, seeming to trade and arrange them on the floor between them, as if in the process of an obscurant negotiation. Indeed, the movement, structured from the Mary Oliver poem “Five A. M. in the Pinewoods,” drew liberally on its imagery and mood.

Eventually, Ernst rose as Marasa sang and started unfolding chairs for audience members to sit in. Through a series of movements and negotiations of the space, Marasa and Ernst got the bass upright and, as Ernst plucked the strings, Marasa unfolded sufficient white folding chairs to encircle her, seating audience members in each as a floor to ceiling video shot from within the boughs of a giant pine begins to project on the wall behind. Frankly, for me this was the more disjunctive moment of the evening. While I always appreciate audience integration or participation gestures, this could have been integrated more deftly into the meaning-making of the effort. Instead, after Marasa performed a dance writhing around the perimeter of the encircled audience, Ernst and her bass, the circle was quickly disbanded and the audience re-situated yet again to form a full in-the-round viewing. I felt like I needed this to go further somehow, as is often the case with participation that mainly involves treating the audience as mere setpieces. Or skipped altogether.

Regardless, the tenor continued to build apace, focal point restored to Ernst and Marasa’s bodies moving in the now-open space, and the performance coalesced as Ernst, her bass now on its back on the floor, began to literally wring its neck, hands squeaking across the polished wood, and Marasa, quasi-nude in sheer clothing, dipped into a series of prolonged rotations around her axial center, long, curly hair whipping as time slowed and Ernst moved into a vocal progression, almost a nonsense lamentation that stretched out the space into extra-dimensions of perception. It’s almost fitting then as, in the distance beyond the walls of Links Hall, a neighborhood dog began barking, in ceaseless rhythm, loud enough to be heard in the relatively quiet confines within.

Marasa pierced through the silence, line after line, and when she said, “When you entered the garden, I saw you,” the notion of this crux of nature, awareness, of pleasure gone rotten with sexuality, of the elevations of desire collapsed into their fallen variants, snaps into sharp focus. It ended, video playing again, with performers and audience gazing up the trunk of a large pine as the sun scintillated down through the boughs. Though abjected by these bodies made the instruments of desire, the heights of redemption, it seemed, do not fail to beckon where the artful countenancing of our prelapsarian states may rise to meet it.