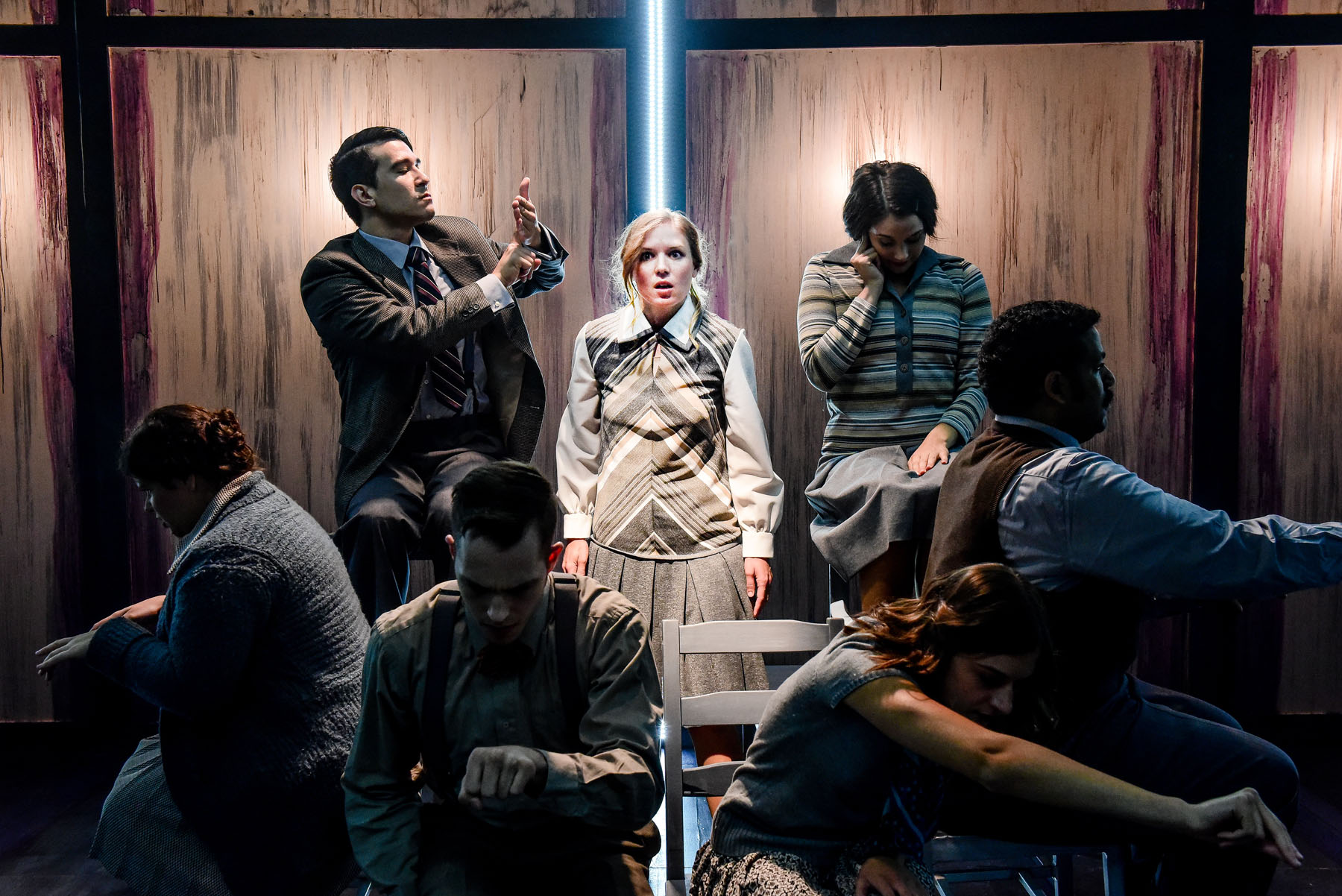 Sophie Treadwell’s “Machinal,” directed by Jacob Harvey, presents in a neat package the boxes with which society compartmentalizes the individual, treating us as malfeasant cells rather than as persons with wants and loves and hopes. Communal life opposes and denigrates the individual and rebellion is an act necessary for a Young Woman (Heather Chrisler) to find a glimpse of love and freedom, only to be punished by the very forces that necessitated her break from the strictures of the machine.

In the starkness of the set, a degree of Brechtian coldness is expected, fulfilled and justified. Using almost exclusively chairs,screens and sound to establish space, Harvey and designer Eleanor Kahn have built a temple out of Treadwell’s expressionistic nightmare which allows the actors to thrive. Muddy acting could clog the machine. After all, the very implication of “Machinal” is precision and clarity.

Thank god Chrisler’s at the helm of this. Her emotional availability and potent, paradoxical use of language define her as an actor to know and watch. As one who is burdened by societal demands, the cracks that form in her are never excessive and never too subtle, always running the line that keeps the audience engaged and heartbroken. Maybe her only failing is during the free-associative monologues; her choice is to play that vulnerability which she can call upon at a dime. In these moments, her struggle is nonspecific terror that disconnects emotion from language.

Scene partners Mother, Husband and Lover (Carin Silkaitis, Sean Gallagher and Cody Proctor) complement her work wonderfully. Silkaitis and Gallagher become human enough to make their encounters uncanny and emotional. Meanwhile Proctor works wonders alongside Chrisler, becoming the epitome of freedom and a portent of what the Young Woman will do (she kills her husband).

A problem, however, lives in that  exactitude demanded from the ensemble. While their verbal rhythm is magnificent and their movements well-designed, the characters they create are… well, characters, which is antithetical to the play’s very nature. Jonah Winston and Maddie Deporter both offer interesting choices while still telling the communal story.

At the end of the day, these are minor critiques. This is a show to see, a revival that deserved to be revived. (Jay Van Ort)