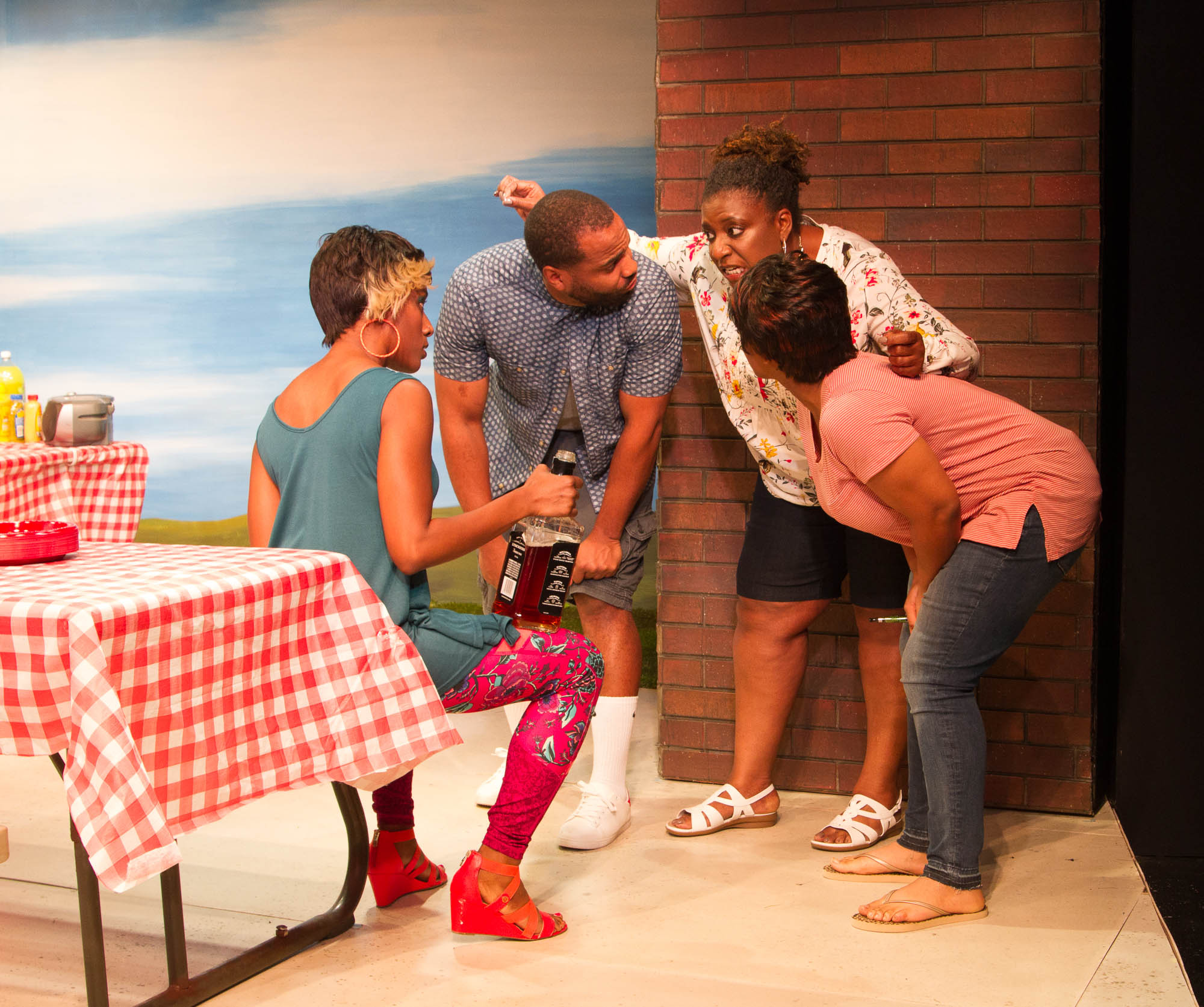 It’s a long road to the punchline of Robert O’Hara’s “Barbecue,” a play that implicates its audience in the rabid voyeurism that once made gladiators heroes and now sponsors a dynasty of Kardashians.

“This is the thing I don’t seem to understand,” whines James T (John Henry Roberts) into his cell phone, manspreading on a camping chair in a public park, where he is claiming territory for the O’Mallery barbecue. “Why do we give a damn?” Indeed, the park is never in much demand—who would want anything to do with its astroturf and blue-paint sky? Even the O’Mallerys don’t actually intend to barbecue there. Instead, they’re staging an intervention. Lillie Anne (played by Barbara Figgins) has seen it on TV, and it always works, she says—come blackmail or bribery.

Their mark is Barbara—aka Zippity Boom—their sister with drug, alcohol and mental health problems. Three’s a charm, since crack, pills, booze and disease run in the family and the O’Mallerys don’t have the cash to be labeled merely eccentric. James T and other siblings Adlean (Kristin Collins) and Marie (Celeste M. Cooper) are reluctantly committed to Lillie Anne’s scheme to get Zippity Boom to rehab—James T has even packed a Taser.

Before your voracity for the delectable horror of other people’s lives can quite be sated, the stage lights and the O’Mallerys flip to black. A second brood of black O’Mallerys picks the scene up with more outrageous fervor than the last. The new Marie (Anita Deely) nearly rattles herself off the set with a bloody account of their childhood neighbor’s matricide, while siblings James T (Terence Sims), Lillie Anne (Deanna Reed-Foster) and Adlean (Kamille Dawkins) merely yawn as if to say, “Again?”

At the hollow center are the Barbaras (Abby Pierce and Ginneh Thomas)—mirror images that confront and distort a few of America’s troubles: race, class, the quest for fame, the mythology of self-help. “We ain’t no normal gatdamn family and we ain’t never been,” rails one of the James Ts. “But all of a sudden y’all read a book or see a TV show and y’all wanna gather up and act like we a normal gatdamn family.” (Irene Hsiao)