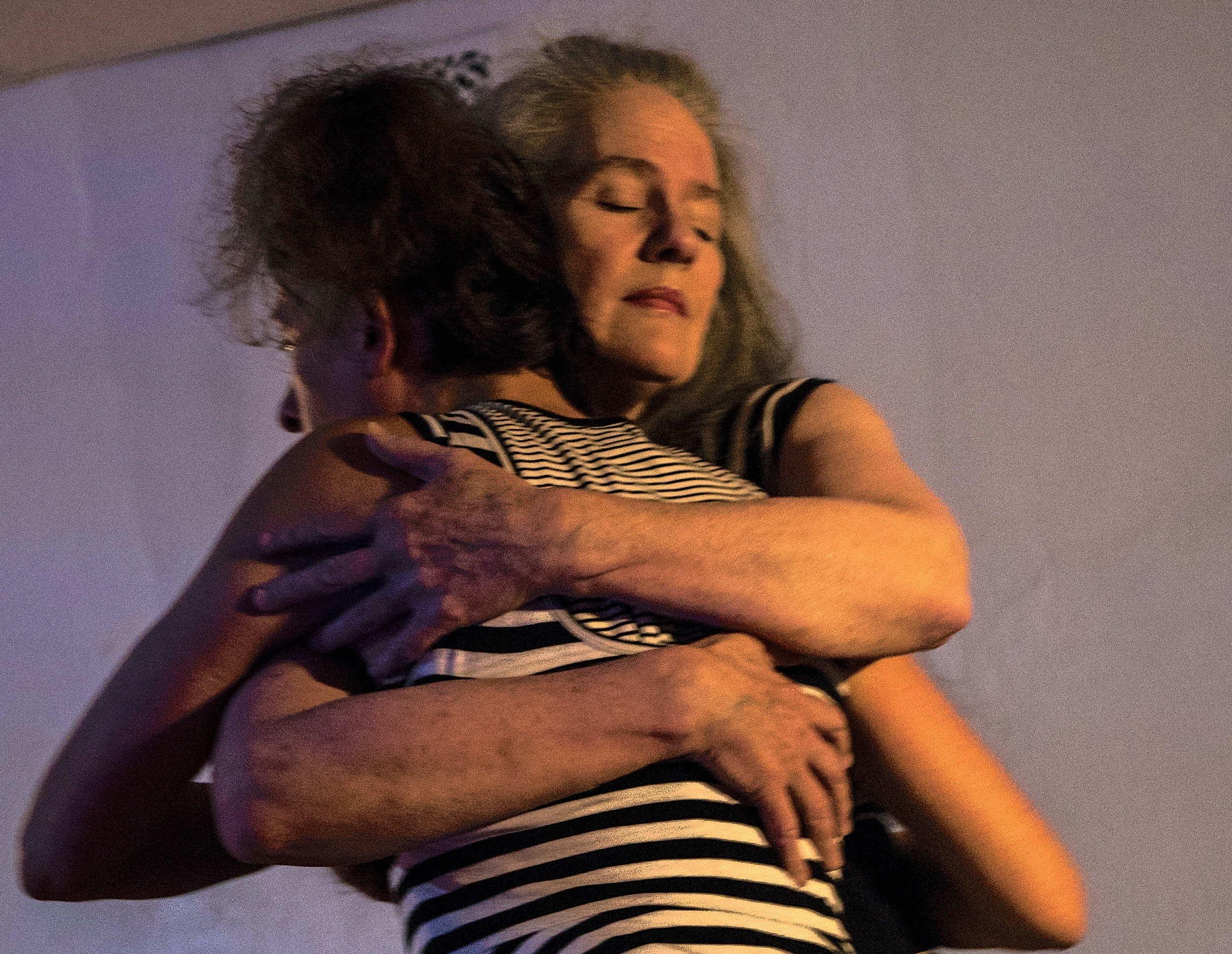 Each year, the Chicago Dancemakers Forum bestows upon a handful of choreographers a no-strings grant to create and present new, innovative work. All styles are welcome and dozens of dancers from classical, modern, street, rhythmic, postmodern traditions and beyond have been able to dive deeply into their creative processes thanks to CDF lab grants. Carole McCurdy is one of last year’s recipients and presents the fruits of her labor September 15-23 at Defibrillator Gallery. Her project “(((waver))” pulls from two very different dance forms that have captured her imagination—Argentine tango and butoh—to explore the embrace of otherness, and the eternal wavering “between female and male, presence and nostalgia, attention and forgetting.”

What drew you to these two very disparate dance forms?
I started with social dance forms—swing, salsa—then I moved on to Argentine tango and the other dances fell away. I got so hooked—I take yearly trips to Buenos Aires—and really fell in love with it. Any time you get deeply involved in a dance form the problems and challenges of it emerge and it becomes a mature love affair. When you’re dancing in a close embrace with a partner, there are moments of intense connections where you lose yourself, your partner loses themselves and you become one being on the floor; that’s the hook. But there are moments of miscommunication or missed signals. All that is very much in my mind putting this together.

Butoh came into my life in 2004 when I moved back to Chicago and was exploring other forms. I took a workshop with Nicole LeGette and something about butoh I connected with in the way I connected with tango. It’s not social; in fact it’s almost asocial and perhaps not even quite human, but to me the link was about this capacity for feeling the world differently through transformation. In tango you do it by connecting with another body and feeling the world with and through another body. In butoh you’re doing it with your own body—you drop your conventions about what it means to move through the world.

You’ve been working on this project for almost a year and you’ve made statements about how this piece is about embracing Otherness within and without. I was wondering how these themes may have changed or evolved throughout the process.
Because we’ve been working on this for a long span of time there have been moments when one or the other of us will disappear for a reason—extended vacations or trips, people who have left for one reason or another. Things get dropped and picked up again over the course of time. The other valence that comes through is a sense of wavery-ness in terms of time. Things seem to disappear and reemerge. Nostalgia is a big theme in tango music; I’m seeing that happen a lot.

One striking thing about both tango and butoh is the idea of listening closely: in tango to your partner, externally, and in butoh, internally. In your notes about this piece you talk about the self needing to disappear in both forms. I was wondering if you run into challenges striking a balance between having to be attentive to what’s happening both outside and very deeply within?
I don’t even think I need to add anything. That really captures the idea that we create a strong boundary between inside and outside. In social theory we talk about creating personal boundaries. In Argentina, if you are introduced to a stranger, you put your arms around them and kiss them on the cheek—that’s polite. Whereas doing that in the US, depending on the community you’re in, could be considered aggressive. All these ways the boundary between external and internal manifests is problematic and delicious in tango; multiple levels of dissolving the boundaries. In butoh I think the internal/external divide is the whole playing field. A really strong butoh performer will be able to project the energy way past the walls of the performance space, or past the boundaries of the city. 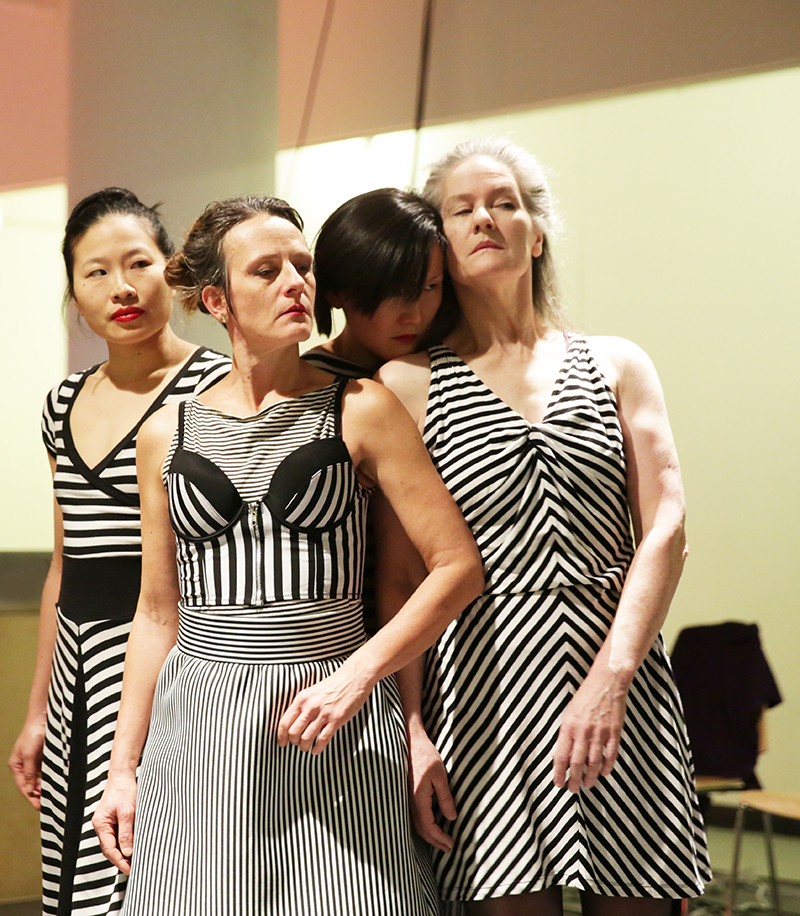 There’s another dichotomy between these forms I want to ask you about. Tango is earthy, but it is also elegant—these are generalizations, but I think it’s fair to say tango could be characterized as elegant. And butoh tends toward the grotesque…
It can be. I don’t think those generalizations are wrong, but as I’ve been exploring these two forms I see so many ways the characters of these dances are super broad and mutable and can evolve for individual performers and as genres. Despite the fact that there’s a very limited vocabulary in tango for the most sense—you’re basically grounded and you’re either stepping forward, backward, to the side or across yourself—but once those vocabulary elements get combined there’s unlimited expression two people can create with it. There’s a kind of contract between the two dancers to work within that vocabulary and be totally open and not anticipate. To me this resonates with butoh, which is about being in the moment as a performer in the space, also allowing other spaces and times to channel through you. Ideas of gracefulness and elegance versus something that’s even, maybe raunchy. I think it’s there in both forms. The cliché of tango is that it’s elegant and it’s sexy. And for sure there’s a sexiness in it because you’re feeling another person intensely, and that resonates with the idea of sexual intimacy. But of course it’s not sexual intimacy; it’s actually just intimacy. And that’s a whole area in a lot of our cultures that is forbidden and makes people uncomfortable. It is the biggest learning curve in tango: being in someone else’s arms and them being in your arms, and allowing yourself to be held.

Most of the people I know are on the spectrum of social justice warriors and there’s a lot there about personal space. And for damn good reason. With tango you are offering yourself to be held and maybe hold someone you might disagree with or might not particularly like at that moment. So the sense that you’re willingly bridging these boundaries is awkward and uncomfortable…what I’m trying to get at is that I want to respond to the beauty in that discomfort. A lot of butoh can be uncomfortable to watch—body movements or facial expressions that might not be beautiful to look at. We can open up our idea of beauty to include things that are not easy.