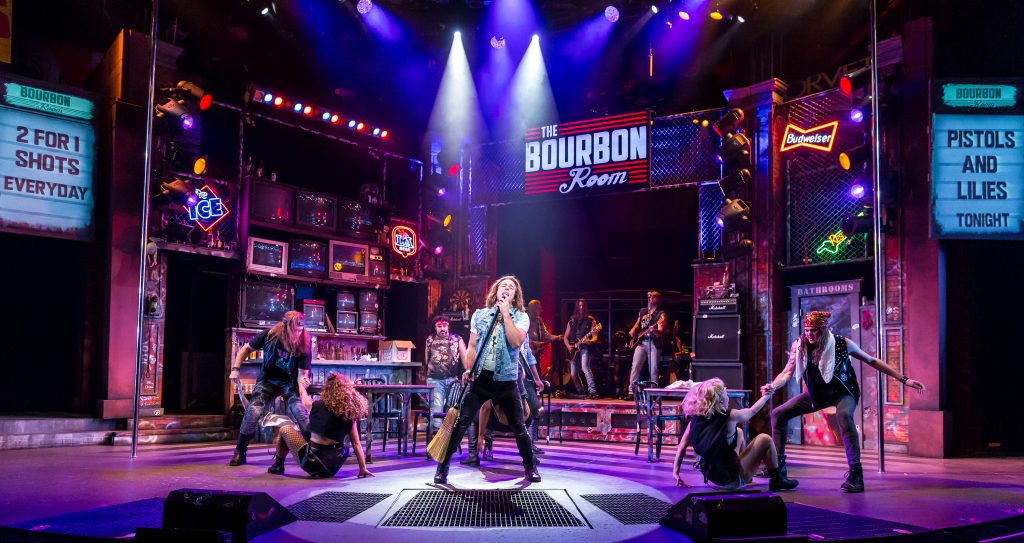 “Rock of Ages” is such a campy show that it’s hard not to enjoy it. It’s completely predictable and simply ridiculous—and it knows it every step of the way.

The book by Chris D’Arienzo has a loose plot: Sherrie (Cherry Torres) leaves her hometown in the hopes of becoming a Hollywood actress. She meets Drew (Russell Mernagh), an aspiring musician and bar-back at the famed Bourbon Room, a club on the Sunset Strip where rock legends are born. There’s an unspoken attraction—and the words that are spoken are not the right ones. Meanwhile, Los Angeles is trying to clean up its reputation–starting with the Strip. As music lovers band together to defend their right to rock, Sherrie and Drew part ways. She gets sucked into the nightlife. He gets sucked into being in a boy band. Yet, of course, their love of rock and their “Don’t Stop Believing” attitudes bring them back together.

The jukebox musical features dozens of eighties rock classics, complete with acid-washed jeans and fishnet tights. This regional premiere at Drury Lane, directed by Scott Weinstein, is as big and goofy as Jon Bon Jovi’s hair circa “Dead or Alive.” For example, the show’s narrator, Lonny (Nick Druzbanski), peruses a copy of “Acting for Dummies” just before “Here I Go Again.” It’s hard not to giggle and just give in to the cheesiness of the moment.

Bottom line: if you’re looking for “Nothin’ But a Good Time” or a good excuse to tease your hair to Marge Simpson heights, “Rock of Ages” just might be the show for you. (Mary Kroeck)