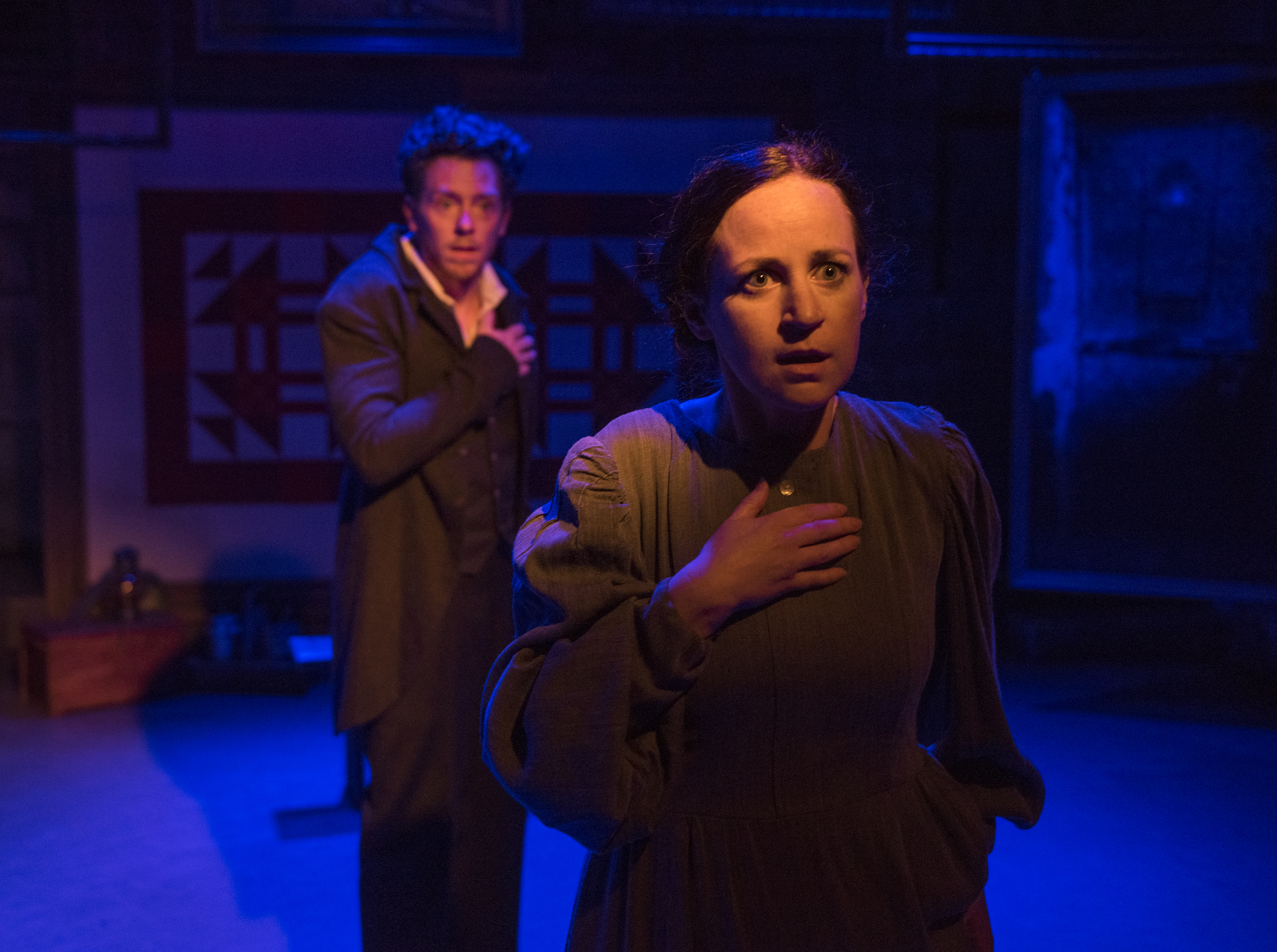 Inspired by a tabloid-ready nineteenth-century true-crime story that, despite being successfully adjudicated, nevertheless continues to capture imaginations worldwide (see: the forthcoming Netflix miniseries), “Alias Grace” works from both the outside and inside. Ostensibly a psychological procedural, the play, adapted from Margaret Atwood’s novel of the same name, suggests an undue patriarchal influence on both the perception of women and women’s perceptions of themselves, although it stops short of outright indictment.

While named for its subject, the play, unlike the novel, is viewed from the perspective of Doctor Simon Jordan (Steve Haggard), a practitioner of a kind of proto-psychoanalysis. The events of the play take place in 1859; Sigmund Freud would have just been entering what he himself would later define as the phallic stage of development. Like many of the men in Jennifer Blackmer’s adaptation, Dr. Jordan has seemingly never left that particular phase and his desire to unlock the riddle of Grace’s mind quickly becomes lasciviously obsessive. His infatuation with the outwardly virtuous Grace is deepened by a projection of her as an object of sexual desire, her participation in or perhaps devising of a double murder forming an orgasmic chain of logic, all while outlining the gendered double standard upon which our entire male-dominated culture is predicated: a woman desired is also a woman feared.

That the dear doctor’s susceptibilities should be increased by chemical dependence only furthers our distrust while the script continuously sets him at odds with his meddling benefactor (Jane Baxter Miller), who also becomes his lover, and by extension, his goal of opening the first privately owned asylum. While none are individually repugnant, taken in combination Grace’s master Thomas Kinnear (Drew Vidal), the brutish stable hand James McDermott (David Raymond) and Dr. Jordan—one may also include the two-faced queen bee Nancy Montgomery (Maura Kidwell) in this equation—form a force greater than the sum of their parts, creating a prison for the everywoman Grace more impenetrable than stone or steel.

As Grace, Ashley Neal is a conduit for her character’s memories, her gaze deep, her myriad anxieties bubbling in the depths. She is best in scenes with Ayssette Muñóz, the supple tenderness of female camaraderie outstripping the thickness of male desire by narrative strides. It would seem that Grace’s life story leading up to the murder of Kinnear and his housekeeper/mistress Nancy is not meant to be remarkable, which can cause the story to occasionally feel stilted and predictable but nevertheless allows for an imperative question to form: What do we think a murder looks like?

Mixing flashback with seductive and occasionally kinky fantasy, Blackmer and director Karen Kessler construct a tapestry of narrative unreliability that, like all mysteries, entices even as it frustrates. That its conclusion (and the pseudo science behind it) is unsatisfying can be forgiven though a more intensive investigation of the character of Grace Marks would have likely led to greater emotional investment in her predicament. As for the murders that predicate the performance, those too remain unresolved, obfuscating the play’s final image of female solidarity, which finds Grace standing alongside the woman whose life she is accused of ending.

While lacking resolution, “Alias Grace” does offer a satisfying wrinkle in what our culture typically presents as the freshly laundered sheets of feminine psychology. However, it should be noted that it took a female novelist, playwright, director and a company literally dedicated to the lives of women to make such a work possible. For its achievements of nuance, there is a sense that “Alias Grace” could have delved further into the cultural pathologies surrounding the treatment of women, which range from casual to criminal. In a year defined by a brazen lack of subtlety, the play’s restraint can feel at times like fighting fire with instructional videotape. (Kevin Greene)