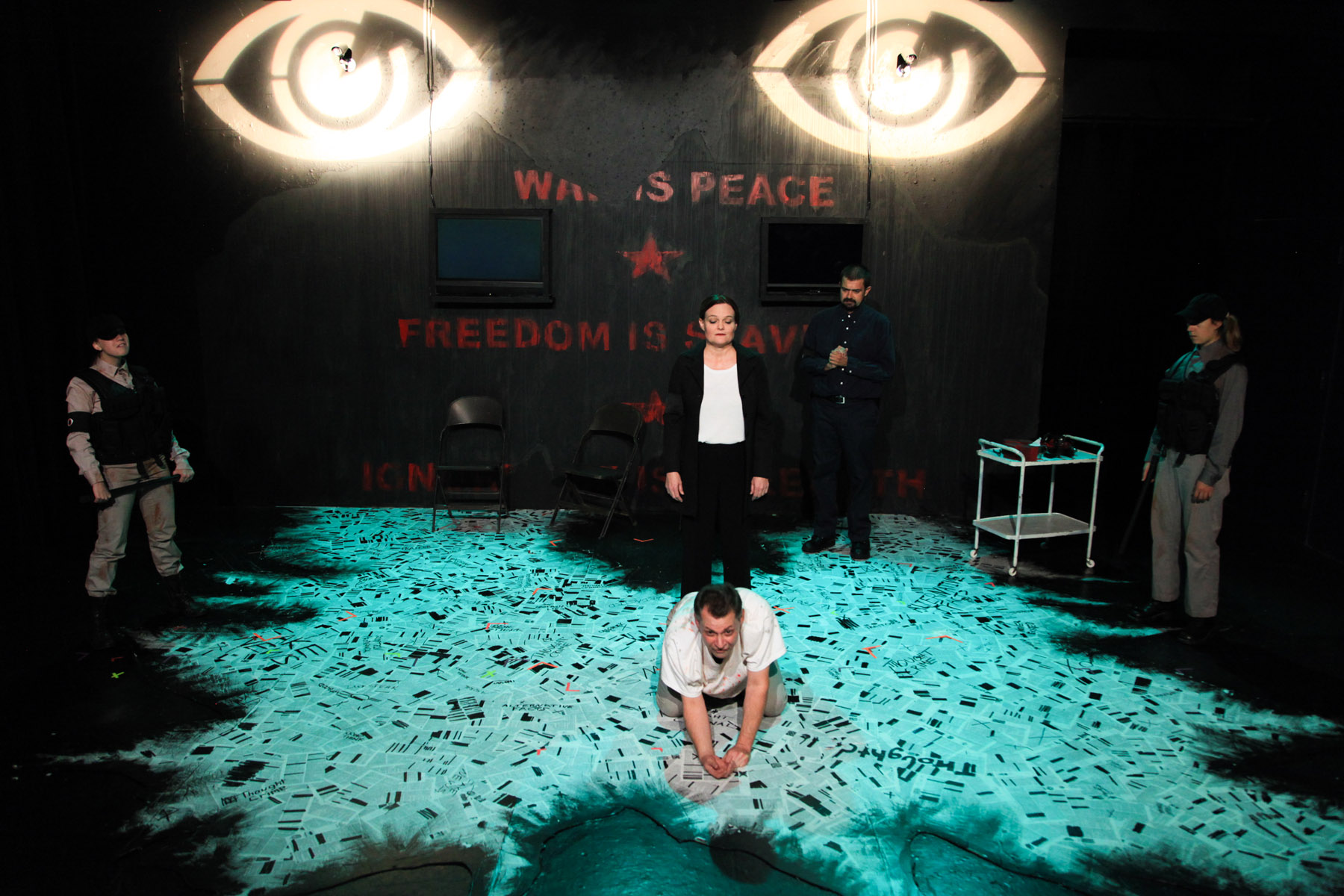 Directed by AstonRep artistic director Robert Tobin, “1984” presents a world where no one has privacy and wrong thinking (called “thoughtcrime,” the criminal act of holding unspoken beliefs or doubts that oppose or question the government of Big Brother) is punishable by torture, death or worse: total erasure from history. Orwell’s book is written through the eyes of an omniscient narrator, which can reveal main character Winston Smith’s innermost thoughts and thus is told mostly through an extended, internal monologue. This doesn’t translate well on stage, so the earliest adaptation of this book (circa 1963) truncated events and made significant changes to the characters’ backgrounds and personas. The most prominent example of this is in Winston Smith’s love interest, Julia, who, in the book, begins a secret affair with Winston and uses sex as an act of rebellion against Big Brother. Her concerns about revolution on a moral scale are limited.

In this adaptation, Julia (Sarah Lo) asks questions about Big Brother and the system and even gets herself transferred to Winston’s (Ray Kasper) department in order to be near him. Instead of carrying out their affair in a Prole church, she arranges for them to get married in one. Though she is still mostly concerned with matters of sensuality and making a comfortable home for herself and Winston, this version adds a dimension to Julia by having her discuss and confront her reasons for rebellion. It does feel like the marital union of Julia and Winston is a higher act of rebellion than an affair. In a world where marriages are mandated by the state and sex is simply a means of procreation, the play’s union seems to have higher stakes than the book’s affair.

Production manager-lighting and sound-designer Samantha Barr and scenic designer-technical director Jeremiah Barr play with light, sound and scene to immerse the cast and audience in a propaganda-driven world, like a foul marriage of the former Soviet Union and Nazi Germany. Telescreens are always in view onstage. Cameras glimmer with red light every few seconds, both onstage and in the audience. The entrance into the theater features blacked-out and marked-up dictionary entries over the walls. And of course, the set itself, with its slogans and many eyes watching, causes the audience to wonder if they are watching the actors in the eyes of Big Brother or being watched by Big Brother himself or both.

Tim Larson and Alexandra Bennett, who play Syme and Parsons respectively, give outstanding performances. Their physical and mental exhaustion translates profoundly, as does their fear, self-deprecation and self-policing in response to other party members, the telescreen and the omniscient invasion of Big Brother into their psyches.

Ray Kasper’s Winston fully emerges in the second act of the play, when he is being tortured by O’Brien (Amy Kasper). Casting Amy Kasper in the role of O’Brien, typically played by a male, adds impact to the onstage chemistry between the characters and the abusive and controlling relationship O’Brien holds over Winston. After starting and stopping his torture, O’Brien cradles Winston like a mother holding a child. The torture scenes in this adaptation do not induce nausea, but fear, by allowing the audience to apply their own wild imagination to sounds and implied actions and movements. Psychological torture is interpreted into psychological manipulation, allowing the story to translate into the mind of the viewer. (Danielle Levsky)