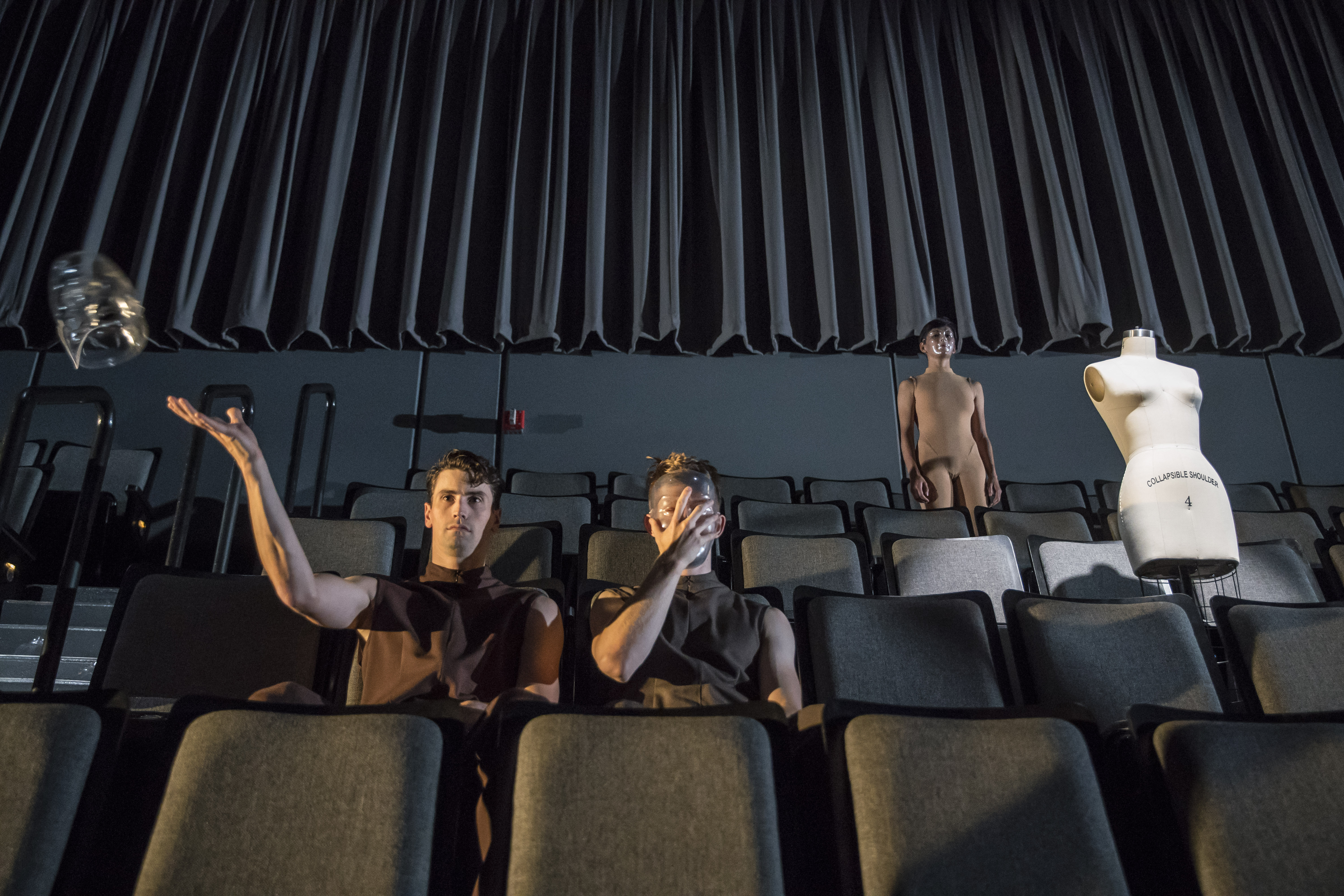 Peter Chiu’s newest work for Hubbard Street Dance liberates the dancers from the stage to the lobby, wings, stairwells, hallways and elevators of the Harris Theater. The hourlong performance, entitled “Space, In Perspective” runs September 21-24, with limited tickets so that dancers, Hubbard Street administrators and Harris Theater staff may successfully herd attendees through the traditionally non-performance spaces with a gentleness that doesn’t break the spell Chiu strives to cast.

To Chiu’s disadvantage is that his self-described dance installation falls in the edges of the shadow of The Seldoms’ 2012 “This Is Not A Dance Concert” which, formally at least, did pretty much the same thing at the same theater—shepherding the audience, broken into groups, through intimate solo, duet, trio or quartet performances at locations in the theater—to memorable effect. However, The Seldoms show was about the Harris Theater itself; text-heavy dance theater, it provided lessons on the architecture and design of the space. Dancers recited Yelp reviews of the cleanliness of the restrooms and the friendliness of the staff. Chiu’s piece is by contrast abstract. It’s not about this specific space so much as it is about space itself, and how space effects the way we perceive art and each other.

The event began with the entire audience on the first-floor lobby. Artistic director Glenn Edgerton stepped up to a microphone and called everyone’s attention, giving basic instructions for the evening with his appropriately prim, yet not unfriendly schoolmasterly bearing. Let the dancers be your guide, treat one another kindly, follow the directions of staff. And then the feeling was a bit like the first day of school when the bell rings, except instead of the pledge of allegiance, Edgerton sang the first few bars of “This Land is Your Land,” which then faded in over the sound system. The mob milled about looking for a dancer to follow, then following, or not following, or being too shy to follow until someone else did. In the first half of the performance the audience stole the show; it was impossible not to watch other attendees with equal or more interest than the small groups of dancers on mats at various locations in the second-floor lobby, elevators and hallways: the aloof guy, arms crossed, wearing a self-consciously skeptical expression; the rapt fan mesmerized, making their appreciation visibly clear; the person (usually male) who takes the instruction to go wherever you like very seriously, seeking spots that push the boundaries of designated audience space; the far more numerous timid ones, reluctant to move until a wave of fellow viewers carry them to another spot; those resistant to flocking, who notice their own desire to do so and consciously move against the stream. And you, Whitmanesque, recognizing yourself in all of them.

The music in the first half was a mix of Americana roots—“St. James Infirmary,” “Heart and Soul”—the sonic backdrop to an atmosphere of delicacy and gentleness. Some moments, in particular a backstage dance party with the audience, bordered on precious, yet charmingly, honestly so. More than one moment was downright awkward (depending on your threshold for this kind of thing). Audience members who go to the theater to be enshrouded in darkness and enter the dream state will find themselves very aware, perhaps uncomfortably so, of their physical presence amongst other bodies, all of whom feel equally important to the Hubbard Street dancers who, in turn, seem a lot like everybody else, especially during transitions from one spot to another. For those of us who appreciate the honesty of a good awkward, human moment, these are some of the most interesting in the show. There are dancers and companies who specialize in this type of interactive performance and Hubbard Street is not one of them. The second half of the performance takes place in a more traditional, audience-seated-in-darkness-dancers-on-a-lit-stage context, during which time the company visibly honed in on choreography that ranges from small—an almost imperceptibly slow descent by dancer Rena Butler from standing to sitting in a chair—to massive, with the combined Hubbard Street professional, Hubbard Street II companies and fifteen additional dancers from their professional training program creating a emotionally powerful moving tableau of humanity that evoked the march of our species through time. The soundscape switches to industrial, non-melodic compositions familiar to contemporary dance audiences. Effective use of projection and incorporation of live vibraphone playing by company member David Schultz punctuated this section. Contrast of perspective here had to do with the scope and tempo of the choreography itself. The show ends with a final shift of perspective between audience and performer and a witty twist at the bows I won’t spoil here.

The setting in the second half is Hubbard Street’s home turf and they’re amongst the best in the world at playing this field, a contrast to the, at times, weird vulnerability of the interactive portion of the show. When the fourth wall comes down in a dance show, spoken language, improvisation and individual personalities of the dancers quite frequently come into play, acknowledging and negotiating the shared experience between performer and observer. But bringing formal, contemporary dance wordlessly into the crowd, for me, held a mirror up to just what a bizarre activity it is to go watch someone roll, however skillfully, on the floor for fifteen to twenty minutes at a pop. The dancers kept focus, but the artifice of that brand of focus, within touching distance of the audience at times felt like sitting in the front row of seats at the IMAX. But then this show is about exploring new perspectives, which are not necessarily comfortable for audience or dancer. It was refreshing to see this company, which does everything they do onstage pretty much flawlessly, step outside their comfort zone and stick a toe in a less-controlled universe of performance. (Sharon Hoyer)