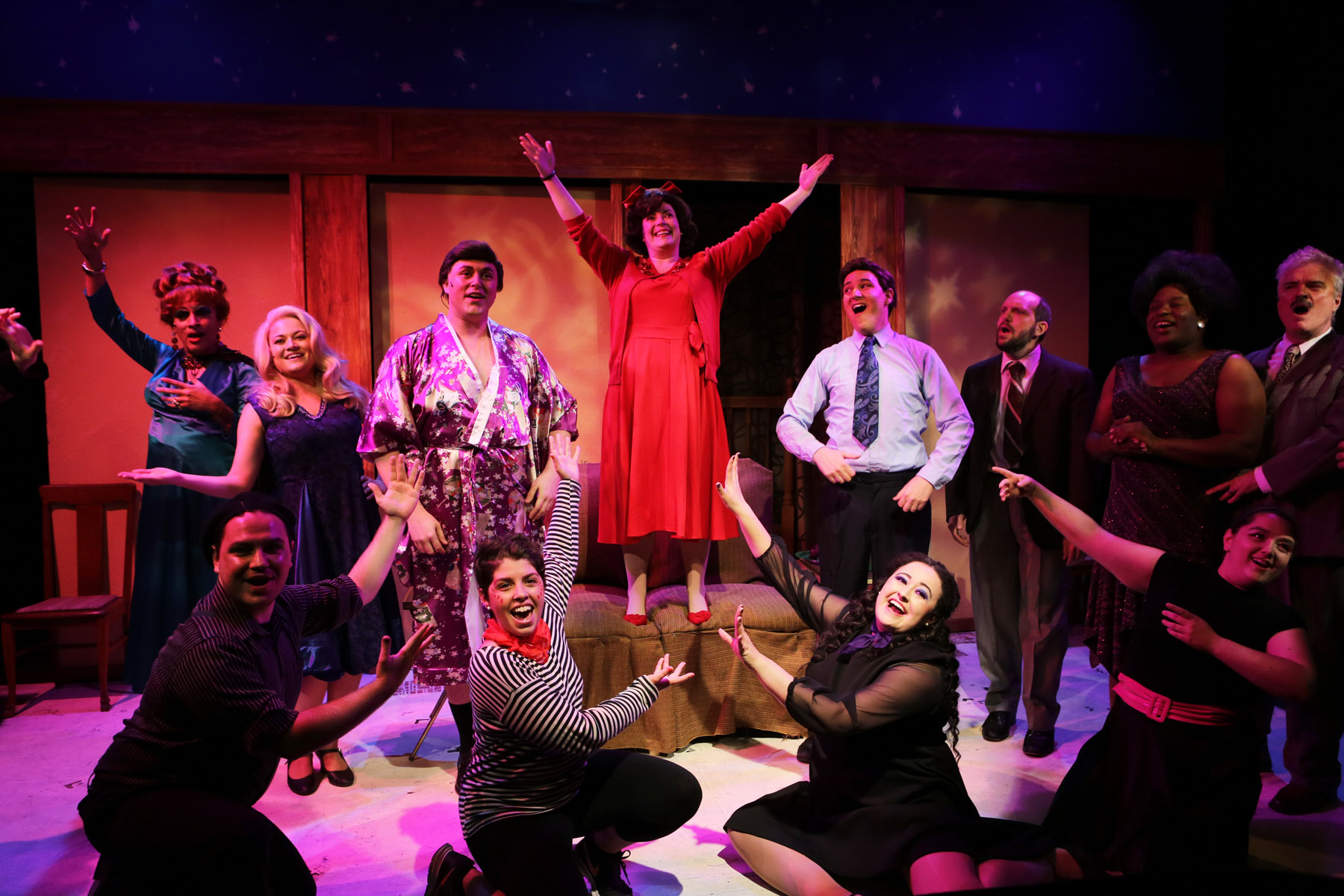 Caitlin Jackson and the cast of “Bewildered”/Photo: Rick Aguilar

Can a theater company created with the sole intent to provide campy parodies of popular culture survive in a town that prides itself on theatrical performances of a “real” and “gritty” nature? That answer would be a persistent “YES!” as Hell in a Handbag celebrates its fifteenth-anniversary season, riding on a star that burns ever brighter, successfully inviting audiences to revel in its hilarious entertainments that always sport a kernel of a moral, through solid casting, better-and-better performing venues and word-of-mouth that is always the best advertising.

“Bewildered” sends up the milieu of the beloved, sixties/seventies television series, “Bewitched,” with the fresh conceit that nosy neighbor Gladys Kravitz has abundant reason for her spying and judging; the audience views the shenanigans through Gladys’ bothered and bewildered eyes. Playwright and lyricist Ron Weaver and composer-lyricist Aaron Benham have created a charming, mostly well-paced vehicle for the sort of players who want to improvise, cut up and still show off their vocal and acting chops. I think this show could receive the traction of the Laird/Paley frolic, “Ruthless The Musical,” for this show, too, sports a role for a baritonal pantomime dame that elevates the piece to frenzied sophistication.

As is often the case for Handbag shows, the dame at the heart of the action is David Cerda. As Endora, Cerda chews all the scenery, floating about in Rachel Sypniewski’s peacock caftans; the earrings themselves are reason to attend. There is more than one male actor out there who will want a chance at those punchlines and silly solos.

There is also more than one theater soprano who will want a shot at this leading lady-character role. Caitlin Jackson’s joyful work as Gladys will ever be the yardstick against which that hopeful must judge herself. Jackson is simply perfect in every way, singing brilliantly, emoting at the pace of a runaway train and still relaxed enough to involve the audience in her theatrical mischief.

You need this silly release in today’s horrific social and political environment. Go. We need it. You heard me. Go! (Aaron Hunt)