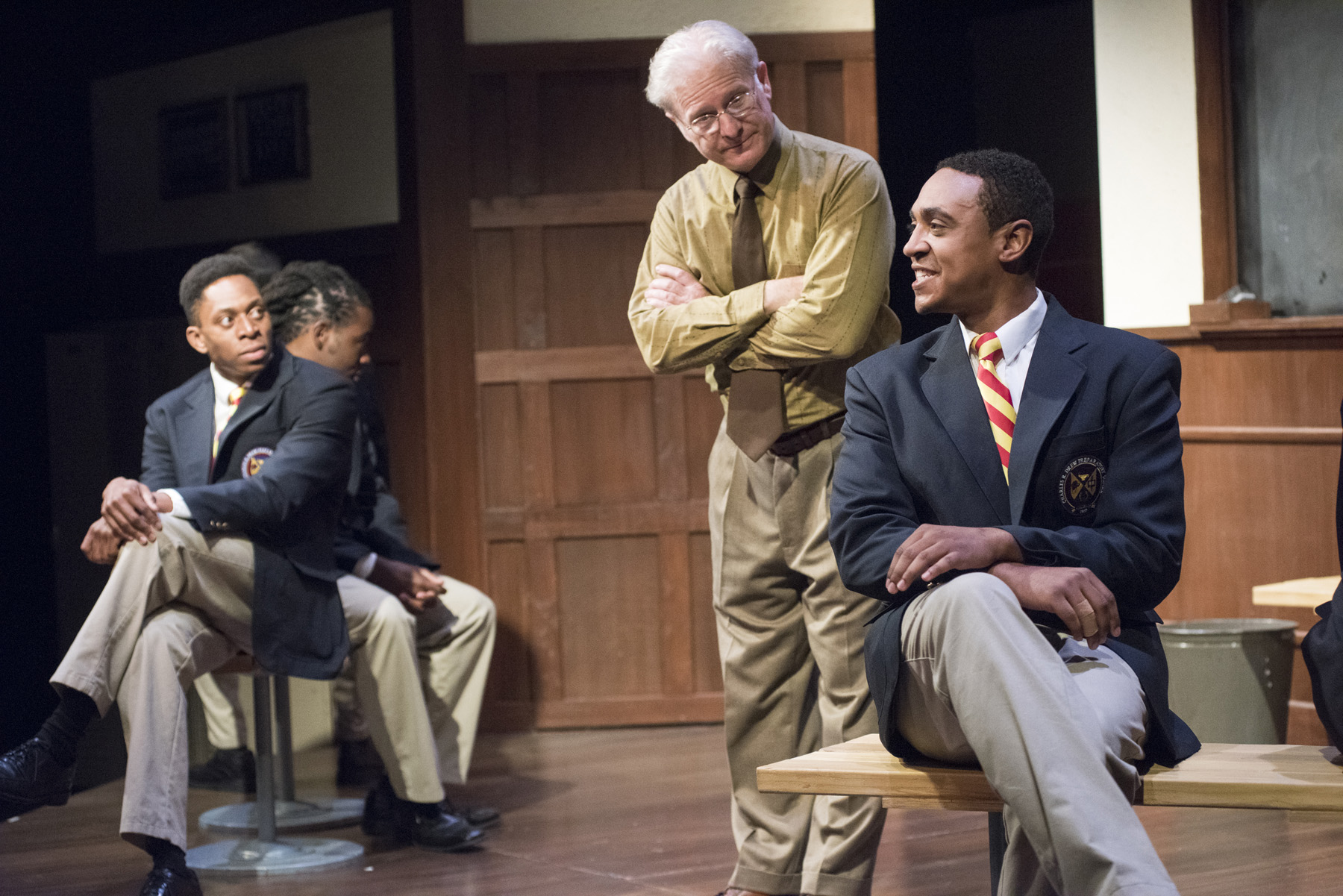 The Chicago premiere of “Choir Boy” at Raven Theatre marks the first major production of a work by Tarell Alvin McCraney in this city since he won (along with co-writer Barry Jenkins) the Academy Award for Best Original Screenplay for “Moonlight.” Originally staged at Manhattan Theatre Club in 2013, the play is set in an exclusively African-American all-boys prep school and contains parallels to “Moonlight,” namely the treacherous task of navigating intersectional identity at a profoundly irrational time in one’s personal and social life. His play also explores religion, shrewdly pointing out the gaps between verse and interpretation, praise and practice.

Pharus (Christopher W. Jones) is the star of the school’s choir and a young man who is most of the way out of the closet. The play opens with him suffering a public humiliation while singing a solo during the prior year’s graduation. And while he will not snitch on his bully (following the school’s unwritten code), he vows to get a second chance. What follows is a year-in-the-life structure that introduces potentially interesting relationships that, in splitting stage time with other less compelling scenes, can feel thin even in their implied intimacy.

The theme of questioning comes through in scenes where a white teacher (Don Tieri) encourages his students to “think outside of the box” (somewhere the ghost of John Keating is roiling). Touching on the dehumanizing of slaves (“You’re taking this personally,” the teacher says to a student at one point. “I’m black,” the student responds) and whether or not spirituals were coded instructions for how to escape, McCraney explores the narratives of black experience both past and present and how the two impact each other. However, these classroom discussions do not always get linked to the day-to-day lives of the students as strongly as they might have, again in part due to their relatively brief duration.

“Choir Boy” is a play structured around physical and emotional violence. Where “Moonlight” illuminated the longing in the interim between things actually happening, “Choir Boy” seems more content to bide its time. In both cases, the audience is responsible for filling in these interstitial moments. However, the motivations in “Choir Boy” are more unclear than mysterious. Stigma aside, there are scenes that seem too pointed to be purely homophobic. There is a personal undercurrent in this play that we as the audience are never fully let into.

In a certain way, the quality of under-writing these characters can feel gratifying: black lives need no more explanation than their white counterparts and the western world has suffered more than its fair share of “misunderstood” white boys both in real life and in art who have benefited greatly from the kind of positive projection that people of color are rarely afforded. Yet that theoretical gratification only goes so far and by the conclusion of the play’s succinct ninety minutes there is a feeling that more was left out than put in.

The cast makes it possible to overlook the deficits in the script. The young actors are an embodiment of camaraderie, their performances blending as well as their superb voices. As Pharus, Jones oscillates between strength and vulnerability with ease. As his antagonist Bobby, Patrick Agada is perhaps the most compelling actor on stage, embodying a form of distinctly black masculinity whose sincerity is informed by McCraney’s curiosity about the performance of gender. Bobby’s behavior (his uncle is the school’s headmaster) is the most complex and well-defined of his peers and Agada seizes the opportunity to breathe life into a bully.

A slice of life story that wants for greater detail, “Choir Boy” is nevertheless a net positive for Raven Theatre and the Chicago theater community. Black lives are at a height of misunderstanding in our culture and even the earnestly sympathetic may find some wrinkle here that they were not expecting. In future drafts, McCraney might consider taking a cue from the success of “Moonlight” and loosen his play’s structure to allow a more purely observational approach without the rigidity of deliberate plot points. In times such as these, there has never been a greater value of seeing life as it truly is and we could all afford to see more of it. (Kevin Greene)