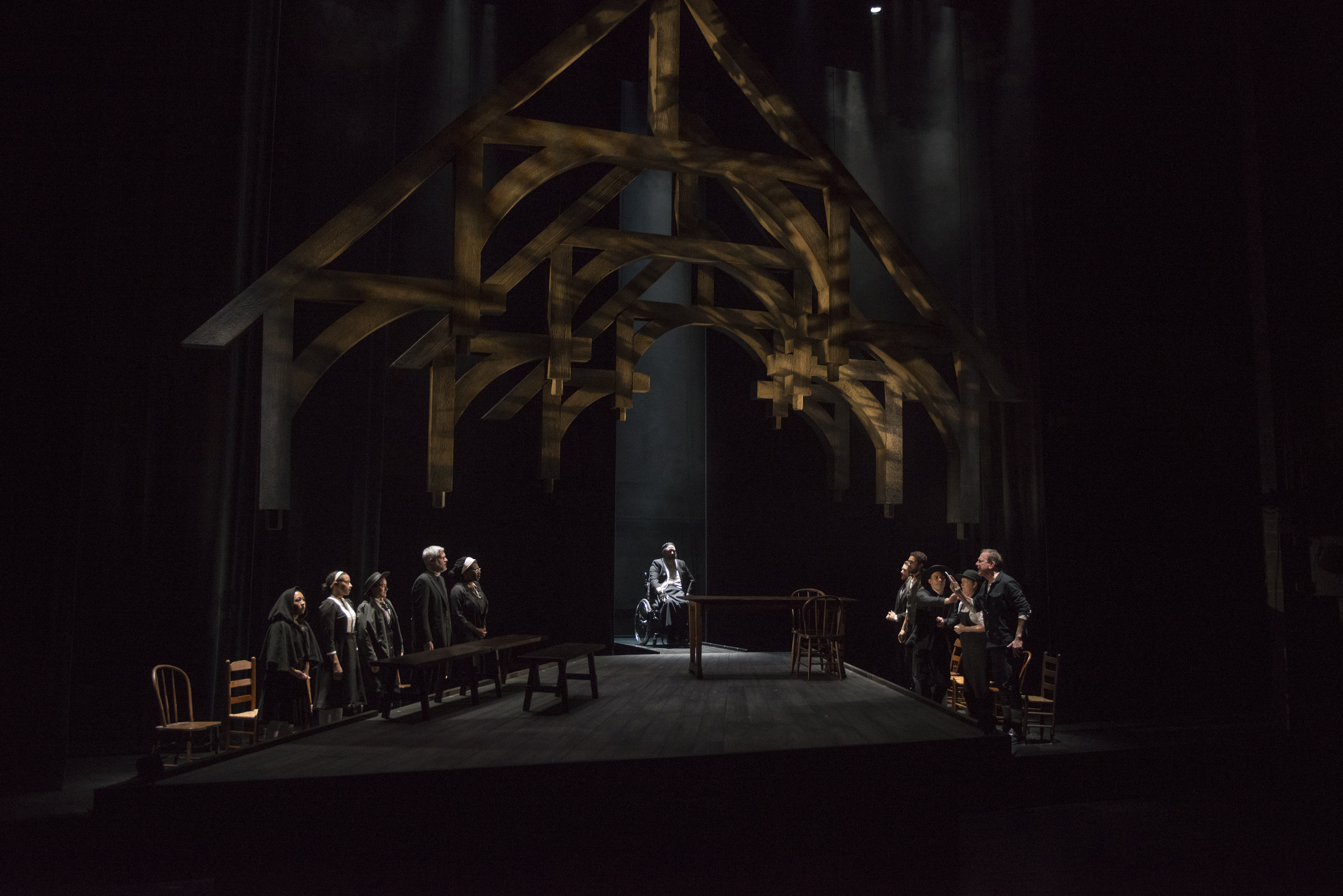 The cast of “The Crucible”/Photo: Michael Brosilow

It seems as long as structures of social power, authoritarian complexes and a general craving for retribution stand, “The Crucible” will remain prophetic. Yet Arthur Miller’s vision of a society tearing itself apart from the inside is ill-fitted to 2017. “The Crucible,” unlike our current political climate, is subtle. Yes, it is a play about conviction as self-deception and the seductive lure that bends the will, timely themes to be sure. Yet it is also crucially about how these forces gain their power through their invisibility. In a year of ear-piercing dog-whistling and where “punch a Nazi” is actual applicable advice, the subtleties of “The Crucible” can feel overly generous. After all, the play is less about what constitutes truth or lies than about the sliding scale of perception that can make the two indistinguishable.

While the play is being produced by Steppenwolf for Young Adults, the company’s youth-oriented branch under the leadership of Hallie Gordon, the casting reflects what seems to be an ancillary goal: giving accomplished but perhaps lower-visibility actors the opportunity to tread the boards of the company’s Downstairs Theatre. The cast skews slightly older, which, given the requirements, feels authentic even while occasionally giving the impression of a development production of a future mainstage show.

Known for his gifts with large groups of actors, Jonathan Berry arranges his diverse ensemble into captivating stage pictures, using the limitations of the proscenium to emphasize visual depth. Arnel Sancianco’s stark set (lit with suffocating doom by Lee Fiskness) focuses on creating as much space as possible in a play that can easily become crowded with period dressings. The end result is moody and slightly exaggerated, splitting the difference between noir and German expressionism.

Performances are generally strong though some of the minor roles can come across as underdefined. As the fretting and temperamental Parris, Peter Moore, seen frequently at his home at Steep Theatre, though not nearly often enough elsewhere, expertly adapts his talent for layered emotion in close up to a larger stage. Erik Hellman makes Reverend Hale’s arc from religious auxiliary to moral clarity believable, a feat more daunting than it sounds. However, it is Michael Patrick Thornton as the leering Deputy Danforth who brings the stakes of the play’s second half into terrifying clarity. Imposing in his restraint, Thornton’s command of the text allows contemporary nuances to slip in without feeling like baiting anachronisms.

As the couple at the center of the tug-of-war between empirical truth and the truth of the heart, much of Miller’s play rests on the Proctors. Travis A. Knight and Kristina Valada-Viars play stronger separately than together. Their inner passions burn brighter than their mutual fire, which can be attributed either to a simple lack of chemistry or perhaps an acknowledgement of the alienating power of guilt and grief. After all, Miller did choose to end “The Crucible” with an act of self-sacrifice that functions as both moral absolution and personal forgiveness. This deeply unromantic play seems to suggest that the only way for these two to be together is to be forever apart.

As an overproduced work from one of the great overproduced American playwrights, this production exchanges urgency for credibility. The play’s themes and resonances have been so well-documented that a production requires intense specificity, which is lacking here. Still, as a work of educational theater that makes reality literary and vice versa, the idea of success in this context is different than in a more conventional setting. In that regard, it requires from the traditional Steppenwolf audience the kind of freshness of senses that much of its intended audience (namely the CPS students who are bussed in for weekday matinee performances) will have in order to induce the sense of awe and terror that this work is capable of. (Kevin Greene)