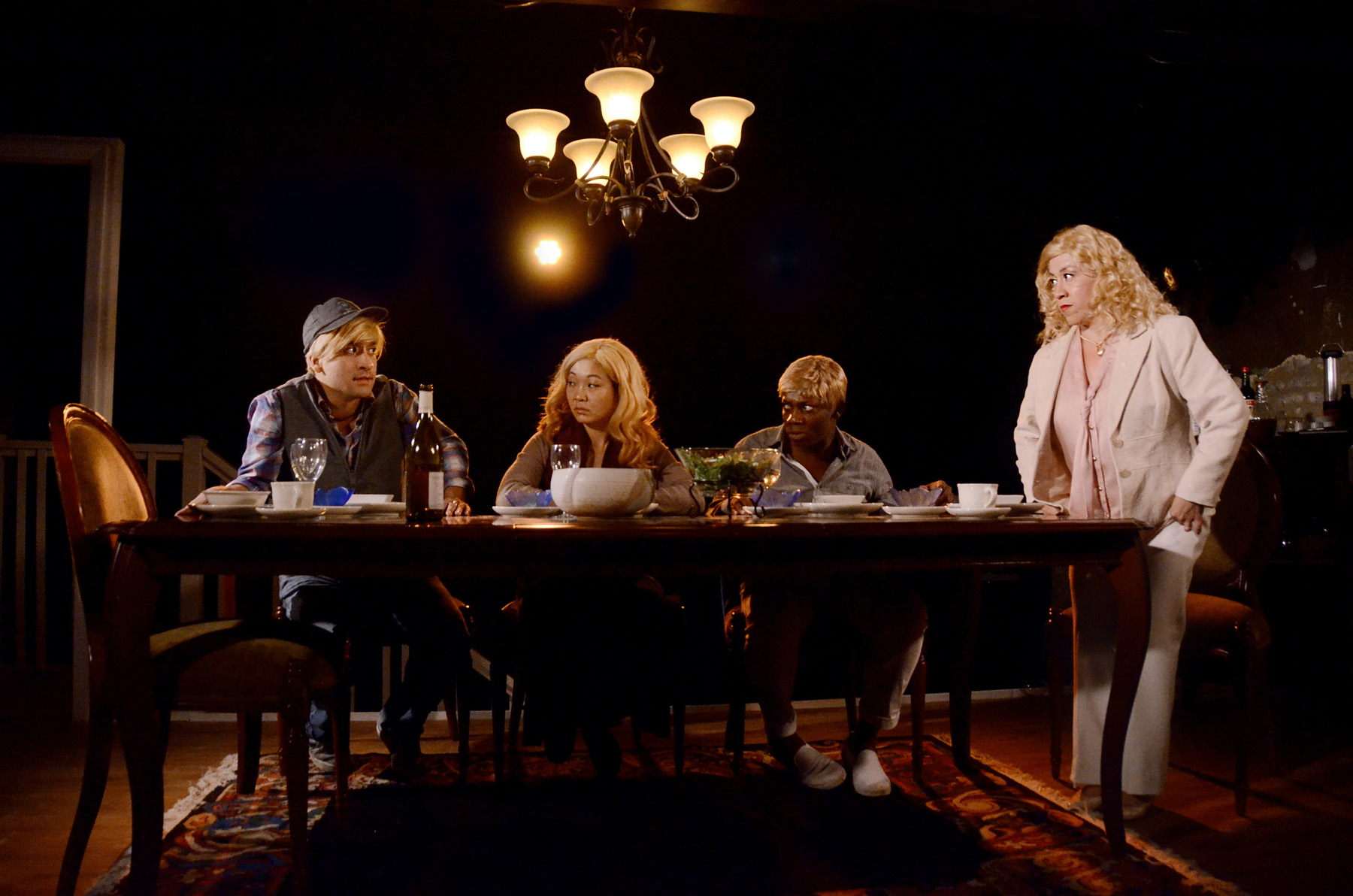 I believe it was George R. R. Martin who definitely never said “You come at the king, you best not miss.” The king that playwright Leah Nanako Winkler fearlessly comes for in her incendiary play “Two Mile Hollow,” currently receiving its jaw-dropping world premiere at First Floor Theater, is no less than white privilege itself. Bearing witness to this play is like being tickled so relentlessly that pain and pleasure coalesce into an experience of pure ecstasy where you suddenly become quite aware of the condition of your trousers.

Set in a Long Island estate on the eve of its sale, “Two Mile Hollow” effortlessly conveys its familiarity with the types of iconic mid-Atlantic, mid-century works where the term “Fitzgeraldian” would not sound contrived at all. Here, the Donnellys, a widow (Jazmín Corona) and her three grown children (Deanna Myers, Jose Nateras and Kai Ealy), have gathered for one last time to perform the rites and rituals of the pallid elite: namely, goading each other into bouts of increasingly ludicrous self-pity. It seems money can’t buy much of anything worthwhile to the Donnellys, except of course the existential emptiness that lies at the end of the American pipe dream. And also stuff like motorcycles, fine glassware and oh so much Scotch. When an ambitious young woman of color (Aurora Adachi-Winter) enters the fray, the ugliness of their ingrained entitlement emerges like so many many-headed hydras.

From there, as they say, hilarity ensues.

In the theater, we are accustomed to seeing self-flagellating whiteness performed by, well, white people. The explicit genius of “Two Mile Hollow” is that the actors playing the lily-white Donnellys are not. What begins as a sketch-like conceit with a tone of well-observed satiric melodrama becomes as layered and full of depth as Arnel Sancianco’s brilliant set, a richly dissected layer cake of crumbling confidence and lagging legacy. Replete with fourth wall breaks as well as song-and-dance numbers, “Two Mile Hollow” constructs an absurdist world that, like an ouroboros, is nourished by the utter insanity of our own.

Nanako Winkler’s brand of savagery is refreshing and exhilarating. The play’s microaggressions are writ macro by her bold and unyielding voice. The production, under the direction of First Floor artistic director Hutch Pimentel, is so unflagging that seeing it multiple times would undoubtedly yield a multiplicity of rewards, not the least of which is the comedic timing of the ensemble who pop off like sentient cuckoo clocks that took parts of the first season of “True Detective” far too seriously. It is endlessly quotable (“Go back to ‘August: Osage County’… you harrowing cunt”), mixing high (Hawthorne) and pop (Drake) culture with ease while pointing directly to the corrosive and pervasive virus of whiteness. Suffice it to say, this is not your grandmother’s American pastoral but you should probably take her anyway.

As an unapologetic comedy about quite possibly the least funny topic of all time, “Two Mile Hollow” is liable to be enjoyed immensely by certain audiences (young, diverse, openly political) and dismissed by others (it is unafraid to name names when it comes to the highly divisive public crisis in our city’s critical community). While it is sure to ruffle some feathers, it is likely to lift far more wings. (Kevin Greene)