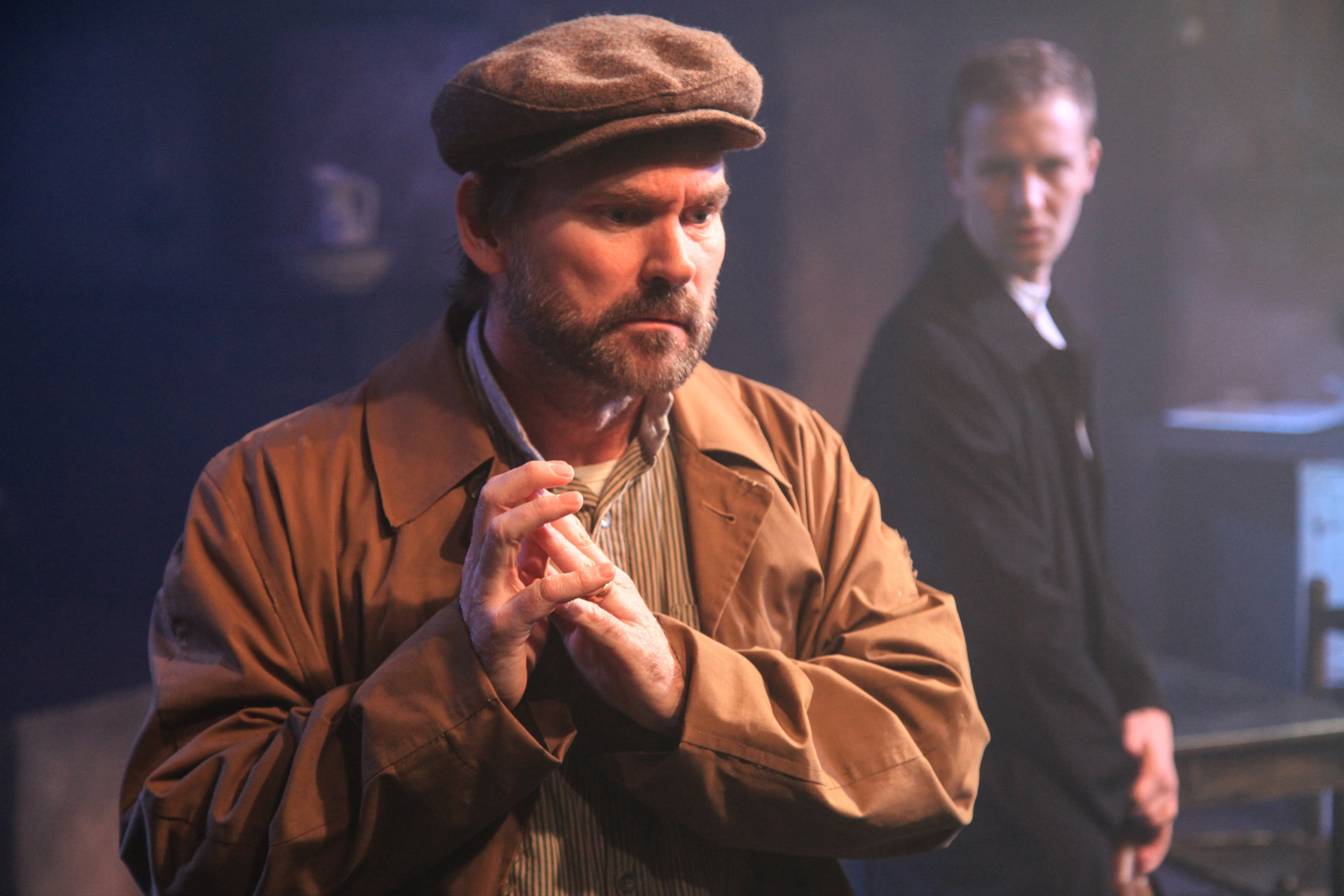 In the near future, the rural ecology of England (and presumably elsewhere) has collapsed, placing the country on the brink of starvation. An intrusive and paranoid government fixes the blame on foxes, somehow deciding that the much-hunted critters are not just sly tricksters and occasional chicken thieves, but a whiskered red menace, malicious saboteurs at war with humanity.

The theory has a slight flaw, in that no one has spotted a fox in years and the species may in fact be extinct in England. No matter: according to the non-disprovable logic of witch hunting, the foxes’ absence, which confuses the public and weakens its resolve, is more proof of their cunning, wicked presence.

Put this baldly, the premise of “Foxfinder,” a 2011 work now enjoying its Midwestern premiere courtesy of Interrobang Theatre Project, sounds like something out of Mike Judge’s goofball film satire “Idiocracy.” But British playwright Dawn King’s script isn’t the least bit funny. It’s a grim allegory in the form of a gothic-tinged sci-fi thriller, rendered by director Margaret Knapp and her four-person cast into a gripping and thought-provoking theatrical experience, along with lighting designer John Kelly, who bathes the proceedings in a frosty, subtly spooky blue glow.

The story centers on Samuel and Judith Covey, a married couple whose remote farm has fallen victim to a recent run of bad luck, from the apparently accidental death of their young son to flooding and poor harvests. Capping their misery is a visit by William Bloor, an inquisitorial “foxfinder” dispatched by a dictatorial (and demented) central authority to determine whether their fields’ declining productivity is due to “fox contamination.” The stakes are high: if the Coveys are found wanting as farmers and insufficiently anti-fox, they could lose their homestead and wind up working in one of the regime’s concentration-camp-like factories. Making things even worse, Judith’s friend Sarah has given her a subversive pamphlet debunking the state’s kooky fox phobia.

The two key roles are the earnest, anxious Judith and the young and creepy William, whose monastic single-mindedness is shaken by his growing attraction to the farmer’s wife. Alexandra Fisher and Jack Olin are superb as these two very different characters, giving a slow crescendo to the tension that builds up within their ostensibly impersonal interactions. They’re nicely complemented by David Anthony Marshall as Samuel, the grieving father pushed close to the breaking point, and Alanna Rogers as Sarah, the rebellious friend whose loyalty to Judith will be tested.

The dialogue has an occasional YA touch, explaining more than it needs to, but the playwright is clearly a storyteller of real ability, whose influences here include Arthur Miller’s “The Crucible” and Margaret Atwood’s “The Handmaid’s Tale,” with perhaps a touch of “Measure for Measure” in the sexual blackmail subplot. But clearly her chief inspiration is the (genuinely) Fox-tainted media, which pursue an emotionalized, fear-mongering agenda while ignoring systemic, life-threatening issues like climate change.

Like “The Crucible,” “Foxfinder” dissects the human reality of witch-hunt hysteria, revealing its roots in repression, conformity, isolation and guilt. The beast is not out there in the woods; it’s within our own mental and moral thickets, our own lack of self-awareness. Kudos to Interrobang for staging this timely play, whose concept may seem loopy at first but is really as crazy like a fox. (Hugh Iglarsh)