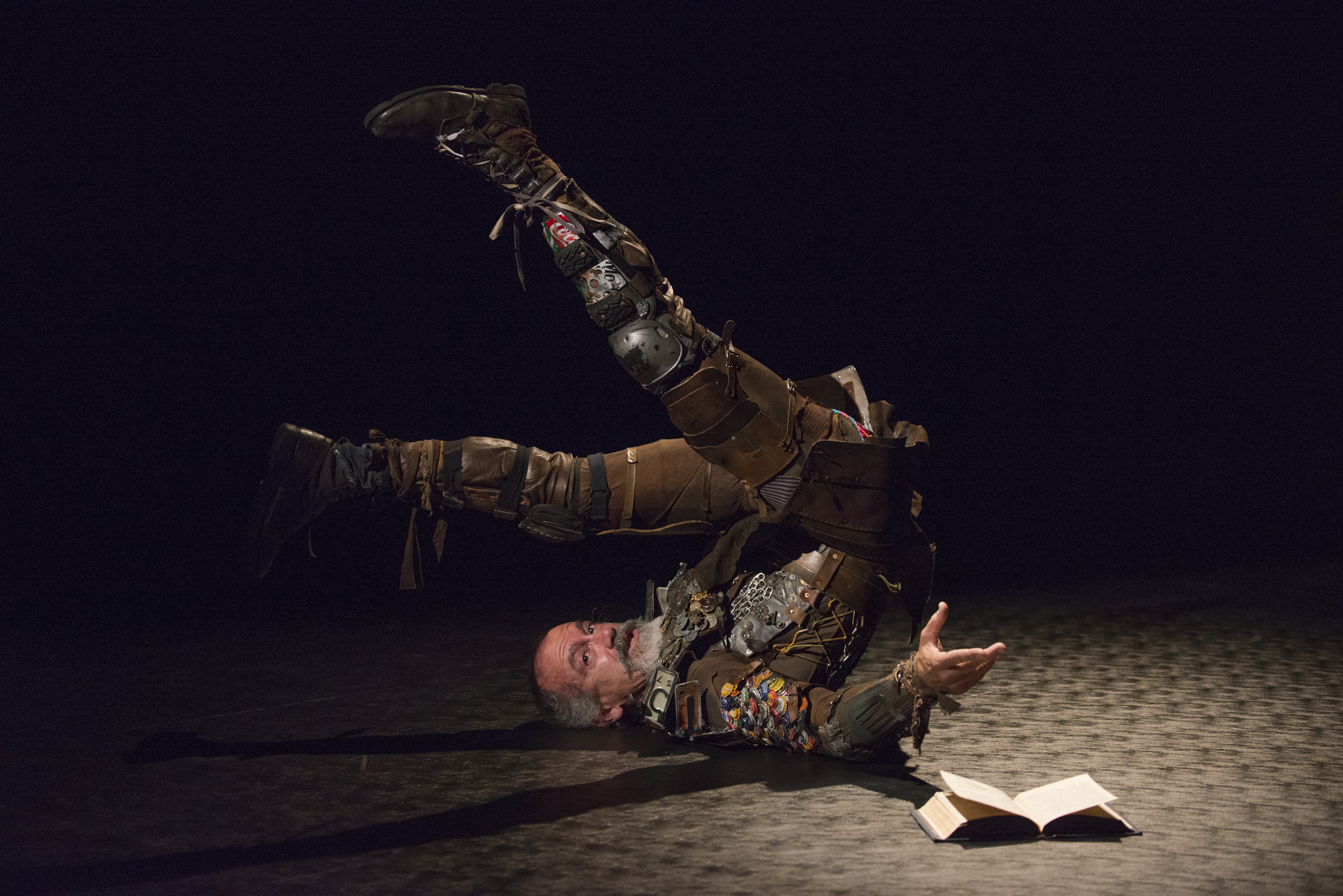 The good news is that veteran Chicago actor Henry Godinez fits into the role of Don Quixote as perfectly as a knight errant’s hand easing into a well-worn gauntlet. Garbed in designer Sanja Manakoski’s inspired suit of “armor”—an assemblage of flattened beer cans, bottle caps and old license plates—Godinez effortlessly conveys the heroic, addlepated essence of the Lord of La Mancha, the starry-eyed dreamer who longs to translate his pinched, mundane existence into the gallant realm of epic romance.

The bad news is that Mexican playwrights Mónica Hoth and Claudio Valdés Kuri (Kuri also directs this Writers Theater production, using Georgina Escobar’s deft translation) end up marching his Knight of the Sad Countenance in the wrong direction, away from wit-honed insight and complexity and toward preachy platitude. This is a Quixote adaptation that turns against itself, serving as a lesson not so much in classic literature as in squandered opportunity.

The curtain opens upon the acrobatically crumpled form of Godinez, looking like human origami, a copy of his own novel just out of reach on the bare stage. Over the course of the show’s single act, the hero’s quest will be to get a grip on the book containing his story. This would gain him control over his life, now dominated by the invisible and godlike author Cervantes, who gets things wrong and appears to Quixote as “my enemy.” Pirandello’s “Six Characters in Search of an Author” uses a related conceit to get at deep truths about art and life. But Hoth and Kuri are not Pirandello and their postmodern take on Cervantes’ masterpiece ultimately succeeds only in simplifying the work and diffusing its magic.

What hurts is that the first half really is enchanting. Godinez shows off his formidable improvisational chops by staging a handful of the novel’s episodes—the war against the sheep, the tilting at windmills (here, clever pinwheel shadows), the tragic tale of Cardenio and Luscinda—with randomly chosen audience members. Thus the literary character and performer is transformed into author and director, while spectators become active participants. The device works beautifully, as Godinez literally pulls viewers into the 400-year-old work and makes it come humorously alive.

The final audience member called upon is a plant: the youthful Emma Ladji, who represents the apathetic modern world in need of Quixotic energy and commitment. “There are no Quixotes left,” she sighs. “No gentlemen, only men.” Alas, Ladji, while earnest and likable, lacks Godinez’s lightness of touch and in bringing the tale into our own time, her character shreds the play’s delicate, whimsical structure. Momentum flags in the second half as Cervantes’ irony-tinged tales are replaced by the character’s self-pitying diary entries. An intervening and tedious lesson in pig Latin doesn’t help matters.

In short, the Ladji character makes a poor foil for Don Quixote, underscoring the glaring absence of Sancho Panza, the tattered knight’s plump, loyal and reality-grounded squire. It is Sancho who communicates the divided nature of his master, the irreproachable knight who is also half-cracked, refusing to see that the world he lives in is not that of the medieval tales he loves. Without a Sancho, we get soul without body, heroism without street smarts, romance without satire.

Godinez’s lovely Don Quixote is conquered in the end by the script’s weak ending, which strays from the original’s animating tension between epic and farce. Instead it delivers a semi-sappy, too-easy message about creating our own reality, apparently free from history and social context. Sancho would never buy it. (Hugh Iglarsh)