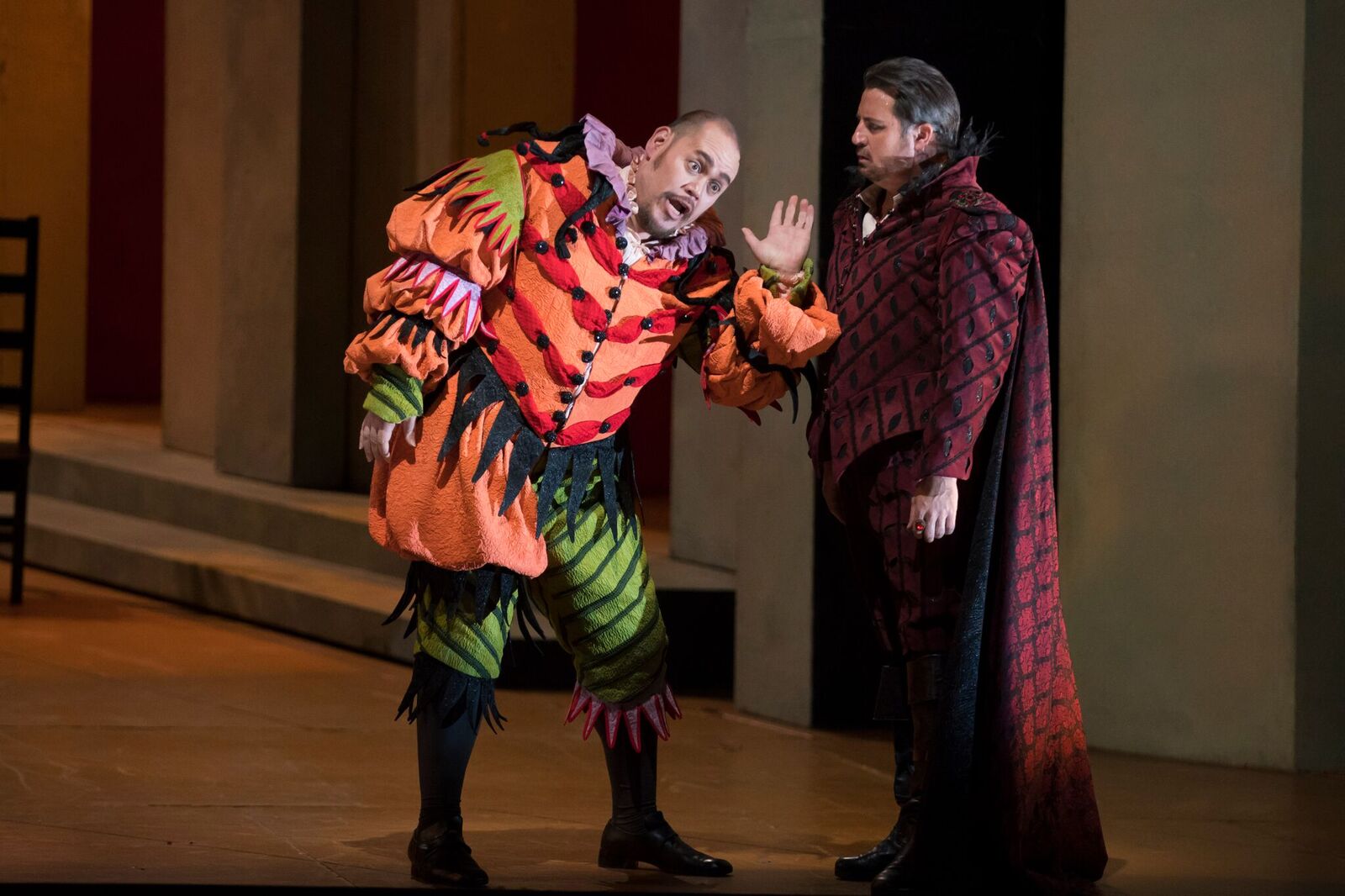 Verdi’s “Rigoletto” may be a hard sell for a contemporary audience. The story of a misshapen father who must ply the trade of a heartily maligned jester in order to afford to squirrel away a secretly rebellious daughter who falls in love with a handsome but debauched Duke who uses her before he takes up with a mezzo who lures men to the home she shared with her brother who kills them and throws them in the river isn’t easy to stomach. The only character with whom we can attach enough to enter this barren world is the jester who enjoys the title role. But not only is it difficult with our contemporary eyes to watch a cripple being emotionally and physically beaten but we learn that the jester is verbally malicious, intellectually flawed and capable of murder. Perhaps we’ve had enough of watching the struggle of the disadvantaged when corralled by someone with all of the wealth and power at his immediate disposal.

Jolly good thing the music is glorious. Some of Verdi’s most beloved tunes are stuffed into this banquet, one after another. And after a 2016/2017 season that offered no verismo opera whatsoever, a Chicago opera audience that loves to yell, “bravo” or “brava” after the high note can finally fill its belly. From the multiple soprano/father and soprano/rake duets, to a stunning trio and the famous quartet, the tunes are staggeringly beautiful. Top it all off with one of the most beloved soprano arias and the tenor tune that everyone knows even if they don’t know it, even the most reluctant listener will be blown away.

Lyric has assembled an endlessly interesting cast, led by Quinn Kelsey in the titular role. Whether one cares for the timbre of Kelsey’s voice or not, and if he quickly drops the physicality he sets up for the character at the beginning of the opera, one cannot deny the artistry with which he delivers his plea for the return of his stolen daughter, spinning lugubrious phrases bedecked with savvy crescendo and diminuendo. If the feckless daughter at times seems vocally ill-suited to Rosa Feola, she attacks the complicated character with vim. First-year Ryan Center member Zanda Švede makes an impressive debut, making us content to watch for this smoky-voiced talent to learn not to upstage herself in Lyric’s gorgeous, cavernous hall.

If conductor Marco Armiliato occasionally seemed to lose contact with the troops, director E. Loren Meeker neglected to give the men’s ensemble something to do other than slap each other on the shoulder too much of the time, and Michael Yeargan’s stark set design missed the opportunity to heighten the tragedy. By contrast, this production is still a wild success via Matthew Polenzani’s portrayal of The Duke. Totally at ease in his role as unrepentant reprobate, Polenzani lilted one golden phrase after another. Usually a tenor progresses to verismo roles after cutting his teeth on Mozart and his ilk and then, out of necessity, leaves them behind. It is astonishing to remember that Polenzani gave us an aching, beautifully phrased Tamino in last year’s “Magic Flute.” Either Polenzani can sing anything, or perhaps Polenzani can sing anything he damn well pleases. (Aaron Hunt)