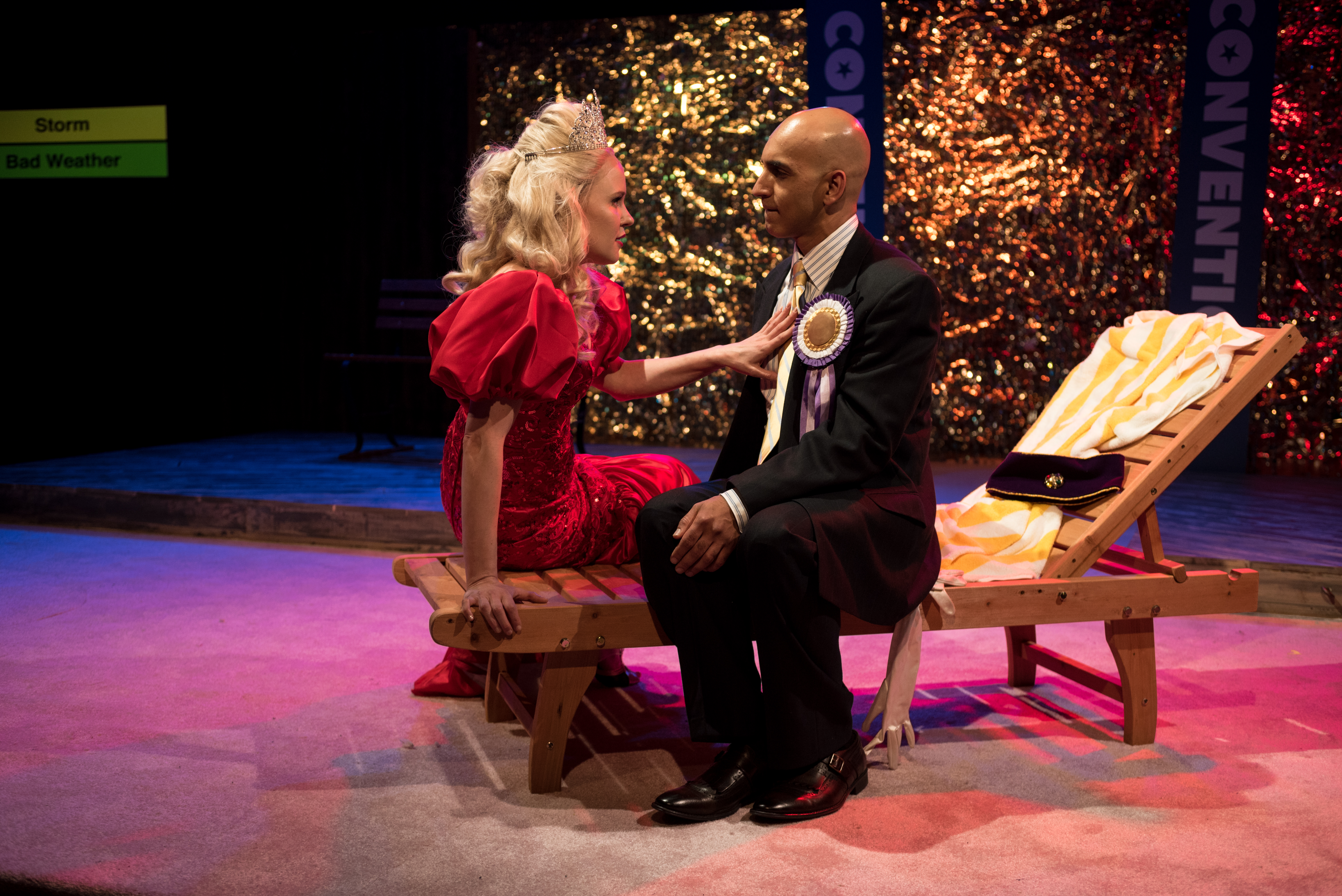 Climate change, refugees, hurricanes, war, lecherous presidents—where are we? That’s right, Excelsior, New Jersey, the perpetual 1950s of the world. First performed in 1942, with a cast that included Tallulah Bankhead in the role of sexy maid Sabina (here played by the considerably higher-pitched Kelly O’Sullivan in an atrocious peroxide-blonde wig), Thornton Wilder’s Pulitzer Prize-winning “The Skin of Our Teeth” must have seemed prescient to a society recovering from economic depression and war, only to find itself reeling on the brink of another that would surpass man’s previous ability to wreak destruction.

It’s the Dark Ages again: the wheel and the alphabet have just come into being, a man had a wife and two kids plus another woman if she could be convinced or coerced. Accidental mortality loomed alarmingly near, followed closely on by the intentional variety. We are at the polished home of George and Maggie Antrobus (Kareem Bandealy and Linda Gillum) when disaster strikes. Just as George has made a breakthrough at work benefitting all mankind, glaciers come roaring through the suburbs, making his home a haven for rabble like Homer (Diego Colòn), Moses (Michael McKeogh), and a handful of Muses and rendering beloved household pets like the dinosaur and the woolly mammoth extinct.

Everything old is about the same again in a production that is still strange and still strangely relevant seventy-five years after its premiere. Perhaps this is because the conditions presented adhere so closely to Biblical norms, both the social conservatism of a nuclear family governed by its male leader and Old Testament violence that manifests as catastrophe or murderous intent. “The earth’s getting so silly, no wonder the sun turns cold,” exclaims the put-upon Mrs. Antrobus, who keeps the home fire burning, mostly obeys her husband and whose expression is limited to a letter she has written, containing “all the things a woman knows,” to be littered in the rising sea. Under Kristen Vanderwarker’s direction, Wilder’s play is disturbingly familiar farce. (Irene Hsiao)