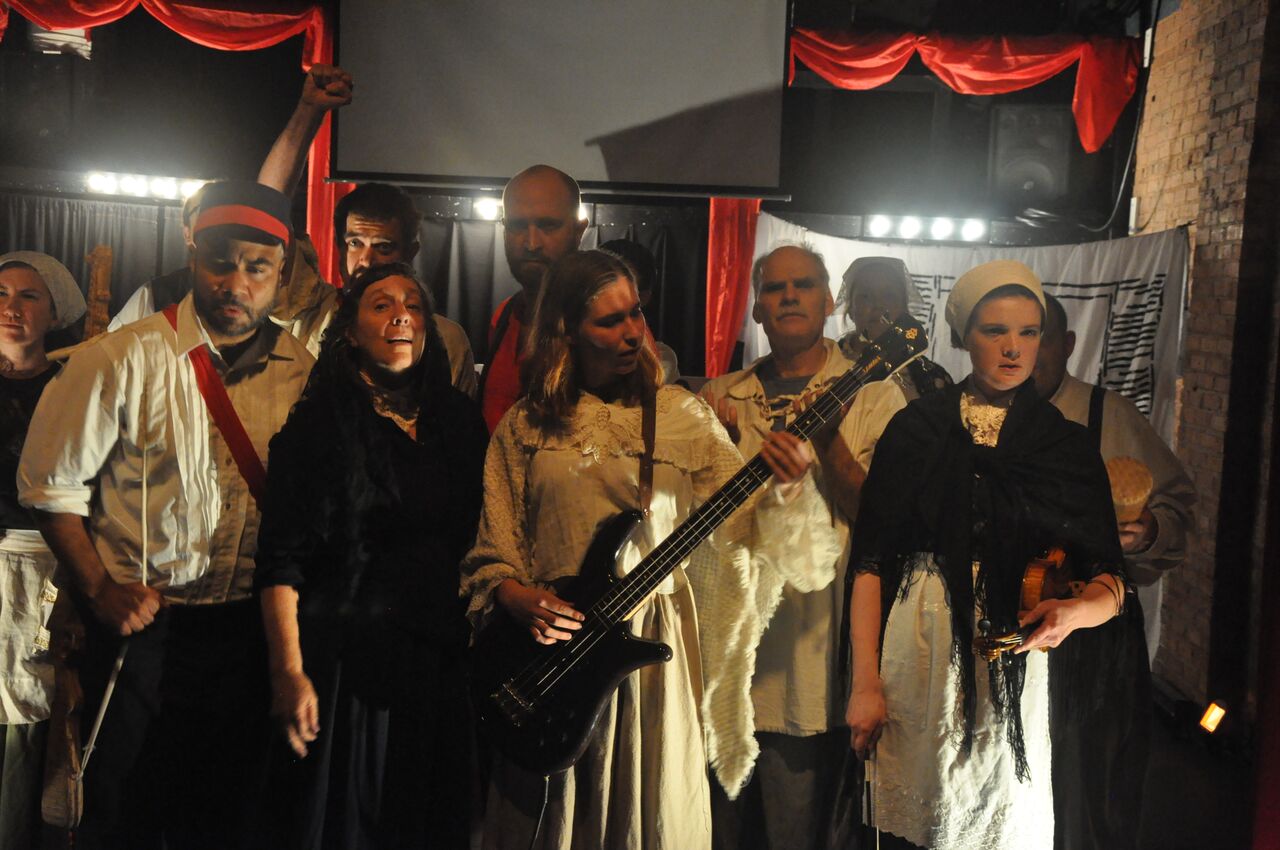 The cast of “The Last Days of Commune”/Photo: Keith Fort

“The Last Days of Commune,” based on Bertolt Brecht’s last and unfinished play, is an adaptation by Prop Thtr artistic director Stefan Brün, composer Kyle Ann Greer and designer Diane Hamm. The original play was written for The Berliner Ensemble but they were not able to perform it in Brecht’s lifetime. However, the ensemble achieved success through their performances because of meticulous rehearsals that spanned months. Each production put on by the ensemble was documented through 600 to 800 photographs. This type of attention to detail most likely created a closeness and familiarity within the ensemble itself. Moreover, each production they performed would be so thoroughly examined and learned from that it would feel truly “lived in.”

Developing and analyzing Brechtian work, specifically what is at play in his script and what it means to be Brechtian, is hard work. In addition, Brecht does not have an individual hero in this story and focuses instead on the collective composite of people within the Paris Commune. His work tends to create an alienation in the audience.

Brün’s adaptation is set in 1871 during the Paris uprising and establishment of the Paris Commune; the script was interpreted to show how Brecht thought “beyond defeat.” Within the show itself were twenty-three performers, including ones that were present for a film within the play and live musical performances. Brün says the play would be an epic “filled with song and fiery passions for our time.”

Julie Williams opens the show on her own with intriguing and subtle facial expressions. Her explanation of her small role within the show sets the tone artfully and allows the audience to latch on and commit to what is about to unfold. She reflects the show’s promise of an upfront and unsentimental nature. Karen Fort, Rick Reardon, Don Schroeder and Christopher Sylvie were also noteworthy performers. The costumes and set fit well within the era of the Paris Commune and the context of the story. The musical numbers were a thoughtful addition but it was often hard to hear the singers without microphones, as the instruments were played through speakers. The incidents written into the play are complex and present a slice of life in the moments these characters share within the context of this historical movement. The quotidian observations and the unenthusiastic delivery of the musical performance brought value to the show.

I had many questions upon exiting this show and it felt like the ensemble of actors did, too. It seems that Brün wanted the play to speak for itself because of its denseness, difficulty and Brechtian tendencies. However, in order to accomplish that, the ensemble must be harmonious and the work must feel “lived in.” Delayed entrances, line jumps, a lack of understanding of line delivery, uncomfortable staging and the distracting white noise created by the onstage film did create an alienation in the audience though it was born from a lack of cohesive, professional performance not metaphorical or representational direction.

Brecht wanted the composite of people of the Paris Commune to act as symbols or archetypes on stage. Unfortunately, there were more lifeless cut outs than there were performers committed to being symbols. (Danielle Levsky)