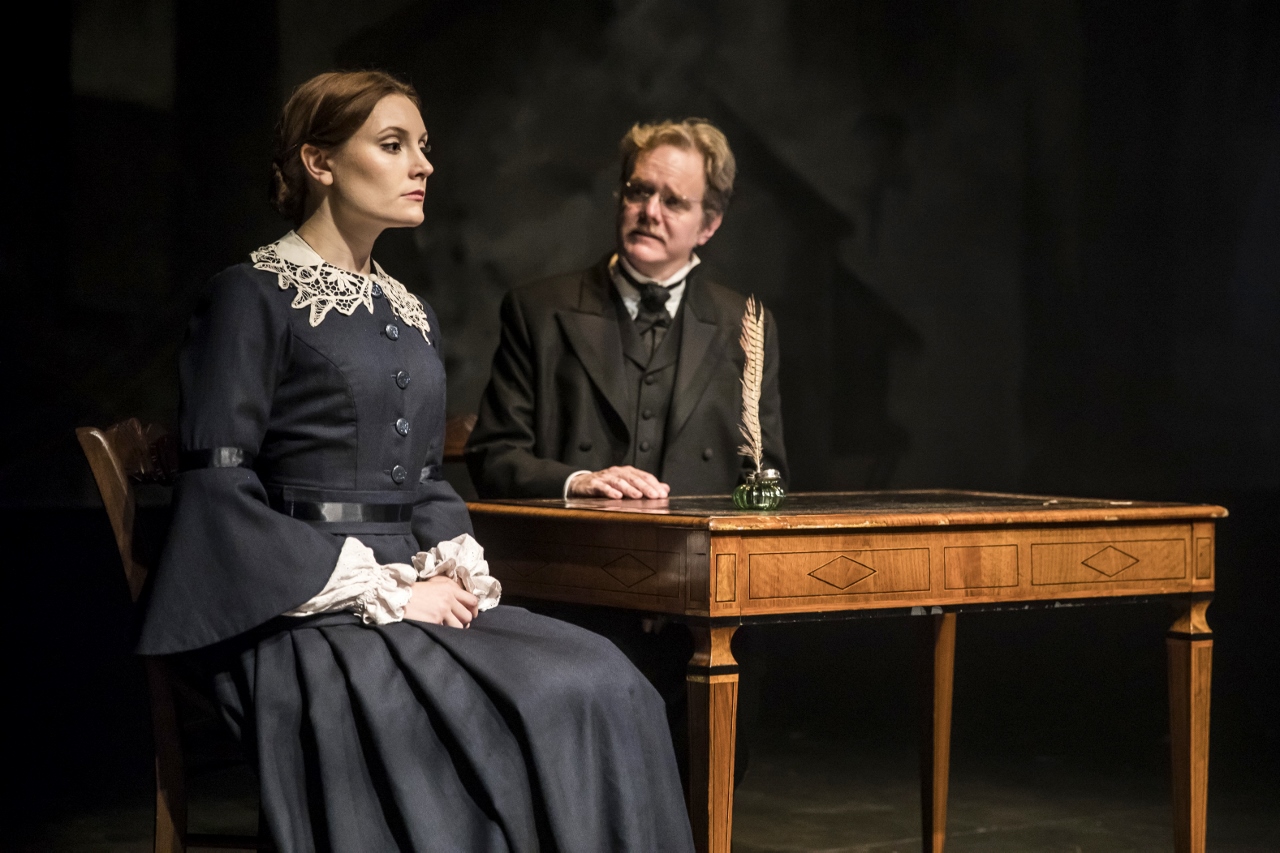 The most ear-catching idea in the revival of Heidi Stillman’s adaptation of Charles Dickens’ “Hard Times” is in a speech made by a circus performer, which bookends the play: in essence, entertainment is important because real life is difficult, a notion that rings true in an era where bingeing has lost much of its negative connotation. It’s also a self-serving message for Lookingglass, who are purveyors of some of the city’s most daring, innovative and memorable theatrical experiences. However, sandwiched between these two slices of plainspoken wisdom is more than two hours of maudlin melodrama, spread thickly with the inequities of bootstraps capitalism.

Lush with language and wit, “Hard Times” is Dickensian almost to a fault, all smoke and rain, galling condescension and repressed tears. Its archetypal characters are embodied by a game ensemble: Raymond Fox’s rigid Mr. Gradgrind, JJ Phillips’ impetuous Tom, Nathan Hosner’s slick Mr. Harthouse, Cordelia Dewdney’s unreachable Louisa, Troy West’s imposing Mr. Bounderby, a character that seems practically made for him so persuasive is his portrayal of Bounderby’s alchemic ability to turn bald contempt into the rhetoric of personal agency.

As is so often the case with Dickens, the rich keep their moral uncertainties at bay by busying themselves with abstracts while the poor suffer with nobility and a depth of self-awareness meant to contrast the superficialities of the class that largely ignores their existence. The plight of all impoverished factory workers is captured achingly in the love-that-shall-never-be subplot between Stephen (David Catlin) and Rachael (Louise Lamson, with Atra Asdou taking over in mid-December), while the circus folks are painted as large-hearted progressives whose understanding of human nature is thoroughly modern.

Despite elegant and expressive aerial routines (courtesy of Lookingglass’ regular artistic partner The Actors Gymnasium), much of the play’s lengthy run time is stiff and its messaging broad. What Dickens could capture in a single sentence, Stillman is forced to reckon with in three dimensions, individual results of which can be seemingly at odds with intention. Amy J. Carle’s shrill Mrs. Sparsit is cartoonish anxiety incarnate, the kind of portrayal that not only takes the wind out of the heavy plotting of the second half but more importantly robs her of a humanity that would have helped balance the punishing forces of sexism that the work seeks to expose. The focus on a singular, ruthless villainy runs counter to our increasing cultural awareness of how enabling works and the need for expansive accountability. Bounderby is surely contemptible. However, Dickens quite literally sets Tom free even though, by the play’s conclusion, he is still blaming his woes on an infinitely patient woman that lives only to serve his needs.

The problem with period pieces, especially of a reputable nature from a lauded source, is that the force of their meaning is simultaneously at a remove but also amplified by time. Dickens’ text arrives more like an overwhelming echo than a clear, strong voice. Is it essential to purposefully point to the exploitation of many to the benefit of a select and largely hand groomed few? Of course. But in that regard, the devastating “Beyond Caring” from earlier this year was a more urgent example, rooted in mundane specifics rather than literary fantasies.

What “Hard Times” achieves that “Beyond Caring” could not is the credibility of its source material and the distance we are permitted to feel from it. We comfort ourselves with the illusion of how much better things are now than then while simultaneously recognizing allusions to our own strained economic system. What’s missing, especially in this particularly alabaster vision, is the notion that we are not just the victims but also the perpetrators of our own economic abuse, a masochistic hamster wheel of our own volition if not of our consent. Responsibility isn’t sexy but running away to join the circus (literal or figurative) does little to solve any problems other than assuage one’s conscience.

In the end, “Hard Times” is a tragedy of degrees. For the villain, there is little more than comeuppance, a device frequently used in Victorian-era work, which is overly moralizing and convenient. The idea that anyone can be shamed into a change of character has proved thin, to say the least. The question of who deserves what is thorny, complex and challenging though to suggest that it is at odds with entertainment does it a disservice. “Hard Times” is no more or less entertaining for its desire to paint in monochromatic moral strokes. Yet to characterize entertainment as respite for a hearty and curious gaze both outward and inward belies the very reputation of Lookingglass’ history and entire fields of art where entertainment and insight not only coexist but do so in positive symbiosis. (Kevin Greene)