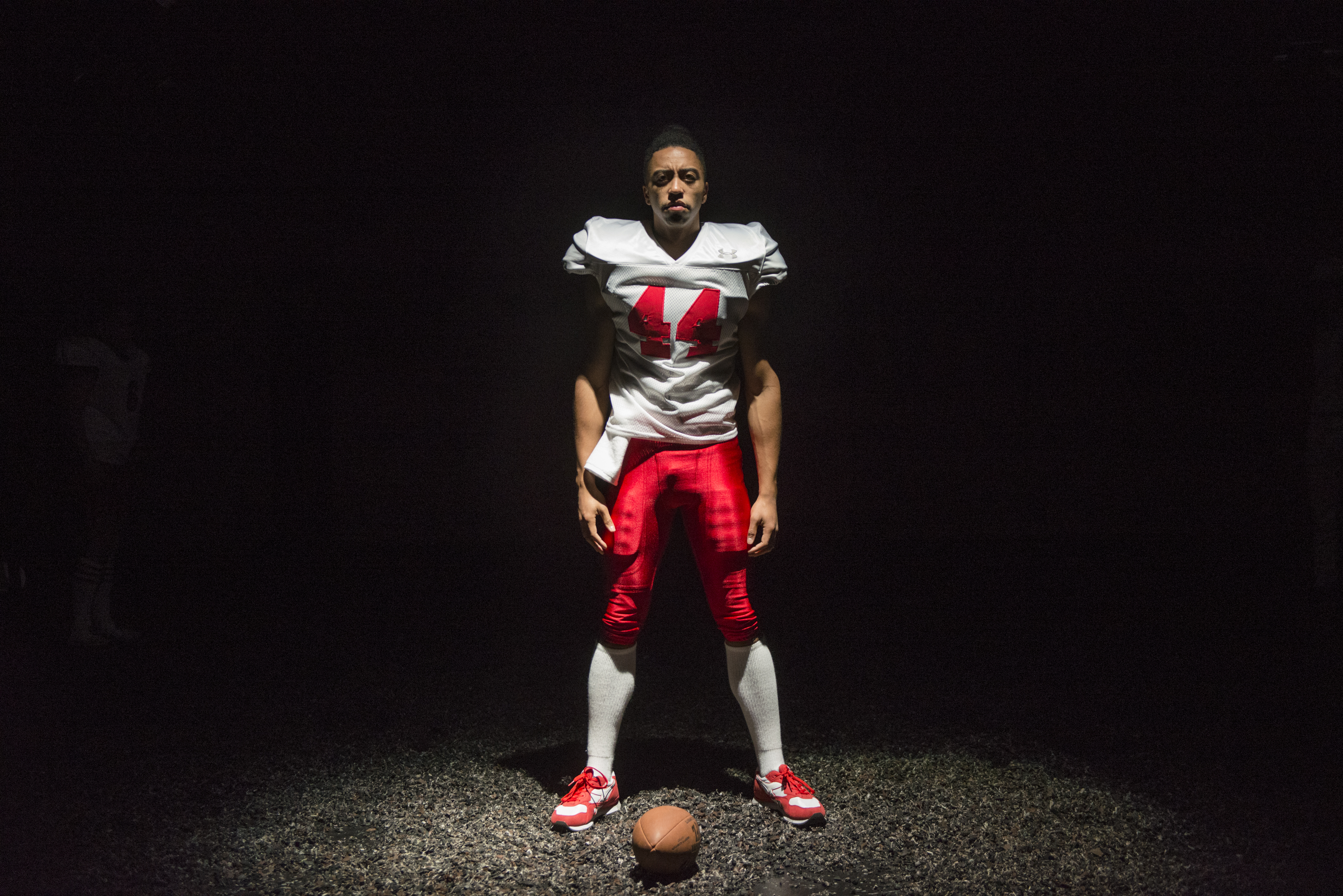 Will Davis continues his streak of bold visions of American iconography with “Welcome to Jesus,” a world premiere from Janine Nabers. This sincere yet horrifying vision of a small Texas town—a microcosm for a kind of moral terror prominent in the American heartlands—is more aggressively political than “Men on Boats” or “Picnic” but retains both of those works’ desire to illuminate the fractures in our collective identity. Taken as a collective mission statement, these three works demonstrate not only the breadth of Davis’ artistic talent but the inclusivity of his vision with “Welcome to Jesus” representing his most daring work with ATC to date.

Given the play’s geography, it is refreshing that Nabers does not exert an excessive amount of energy to humanize her characters. With one important exception, all of her characters are God-fearing Christians with a vested stake in the success of their town’s football team and, crucially, white. The town is haunted by “spooks,” vaguely threatening figures on the fringes of society that fall somewhere between myth and specter to most of the inhabitants. When a nameless young man (Rashaad Hall)—he is referred to as Him in the program—is discovered just outside the forest and enlisted to be the quarterback of the football team, the veneer of civility disintegrates.

Similar to “Pass Over,” Nabers’ play explores the fetishization of black exceptionalism, albeit from a more detached perspective. The townspeople are only interested in Him for his ability to bring them glory. “Welcome to Jesus” is about the toxicity of whiteness but also how whiteness understands itself in the face of tension, strain and conflict. In navigating between cynical caricature and misplaced empathy while working within an allegorical framework, Nabers achieves the kind of uncanny that horror as a genre excels at with an essential twist: despite what they believe, the people most frightened are not the victims of this most American of nightmares. They are its perpetrators.

The political and cultural allusions within Nabers’ play are intentional but not obtuse. The nameless quarterback wears jersey number forty-four. The number itself is likely a reference to our forty-fourth president, a man who is no stranger to the monster of whiteness. Its use as a moniker also nods to the current crisis in the NFL, in particular how Colin Kaepernick’s detractors have referred to him by his jersey number, a dehumanizing attempt to make sure the conversation stays “about the game.” The play’s climax contains echoes of the Black Lives Matter movement with Hall pivoting in a circle, surrounded by the ensemble, demanding to each that they say his name. The moment is brought to a crushing reality when Taylor Blim’s Dixie murmurs at the play’s end “What was his name?” as her mother (Stacy Stoltz) repeatedly intones with crippled conviction “We are good people!”

In its current form, what the play has in potential it lacks in cohesion. Its two halves feel split. The first observes the aesthetics of horror: scenes lit exclusively by flashlight, ominous and inexplicable signs, violence made casual. Cast members hissing offstage augment Jeffrey Levin’s eerie sound design. Set designer Yu Shibagaki understands the genre’s ability to make objects of indiscernible symbolic value more terrifying than their concrete counterparts. Each component is frightfully well-observed down to the blood-red lettering of the football team’s apparel (courtesy of Melissa Ng).The second half is “Get Out” by way of “Friday Night Lights” and hits its narrative and psychological stride quickly and to unnerving effect.

In its next production, Nabers already has a working model in place for linking these halves: Casey Morris’ Mike Danvers. Mike goes from shuffling doofus to egomaniacal leader and Morris is excellent as both, demonstrating how the insecurities of the former inflate the obstinance of the latter. Driven by a mix of patriarchal rejection and guilt over his younger brother’s death, Mike’s transformation is unique among the rest of the characters who remain staid, their innate nature slowly emerging like the long creep of a Nosferatu-like shadow.

Under Davis’ artistic auspice it’s easy to overlook any shortcomings in the script. “Welcome to Jesus” looks unlike anything else you’re likely to see this season. Davis continues to demonstrate his profound freedom of thought when it comes to the art of direction and the results do not fail to captivate. (Kevin Greene)