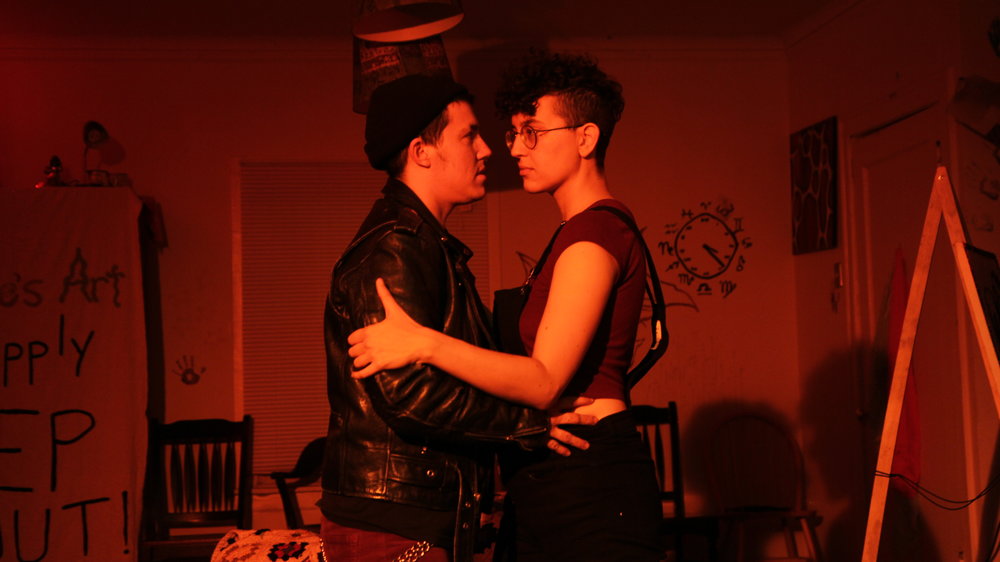 In a play where every character is destined to screw up, Janey Bell’s script offers insight into how young, burgeoning artists tackle (literally, in one instance) the people and obstacles they invite into their lives, whether intentional or not.

I still have questions about whether the production is meant to be a farce or a drama, as it teeters between the genres from one scene to the next. The banter between characters in the first half of the show is strong. Though still entertaining and witty, the final scenes could be revisited to relate more to the established chaos and friendship between title characters Ana (Grace Hutchings) and Bree (Emilie Modaff).

Regardless, director Ben Kaye finesses the script and performers to create an entertaining glimpse into one wild evening of misunderstandings, mishaps and misadventures. The movement through each scene—be it an experimental dance, a fight scene or a frantic freak out around the couch—works well within the staging of this site-specific work.

Hutchings and Modaff have excellent camaraderie though at times it feels as though Hutchings was performing for a black box or traditional stage audience and not one sitting inches from her. Enthusiasm suits her character, but it could be a little jarring.

Modaff was able to find the middle ground. They brought us into the world of the “Bobby Pin Girls” with sharp wit, subtle dramatization and expertly timed reactions. Their rapport with Peter Wilde, who plays Bree’s ex, was palpable and strong, their physical dialogue playing an equally important part to their verbal dialogue. The intensity of their banter is juxtaposed with Modaff’s more casual and humorous scenes with Hutchings and Debo Balogun (Tim). Modaff is able to move between these mindsets effortlessly.

With a strong production team and cast, this show was able to unpack important topics on relationships and discovery. While the script’s overall message can be elaborated, the team’s work paid off to produce a witty, relevant and enjoyable production. (Danielle Levsky)

Nothing Without A Company at The Chicago Mosaic School, 1101 West Granville, nothingwithoutacompany.org, $20-$25. Through December 3.