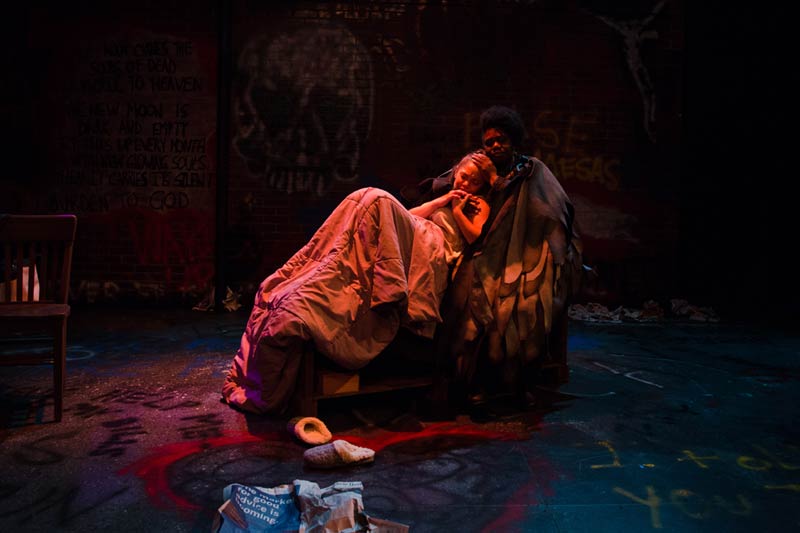 The world has become a dark place, literally. No moon appears in the night sky. Men get pregnant. The homeless are set on fire by Nazis. Everyday life is upside down. The reason? God has lost his mind. The solution? All of heaven’s angels revolt against him to start the world anew.

Though the aforementioned might partially sound like a reflection of modern society, it is actually the plot of “Marisol,” José Rivera’s 1993 Obie Award-winning play. The play’s magical realism can often overshadow its elements of dark humor. However, this production, directed by Juan Castañeda (literary manager and artistic director of UrbanTheater Company), focuses more on the absurdity of the story but the punch lines don’t always land successfully.

In addition to the lack of more fantastical elements, the show is also riddled with clunky and eerily quiet transitions. It’s hard to imagine New York City ever being as hushed as it is presented here. The lack of complete blackouts takes you out of Rivera’s dystopian society and forces you into remembering you are just sitting in a theater, disconnected from what is happening five feet in front of you.

The storyline is fascinating and the script is worth the read. In this day and age, there are a lot of parallels that could translate successfully to audience members in need of hope that the world can, somehow, be better. Yet, this production’s lack of concentration on the supernatural dulls the story down and the magic is sorely missed.  (Mary Kroeck)