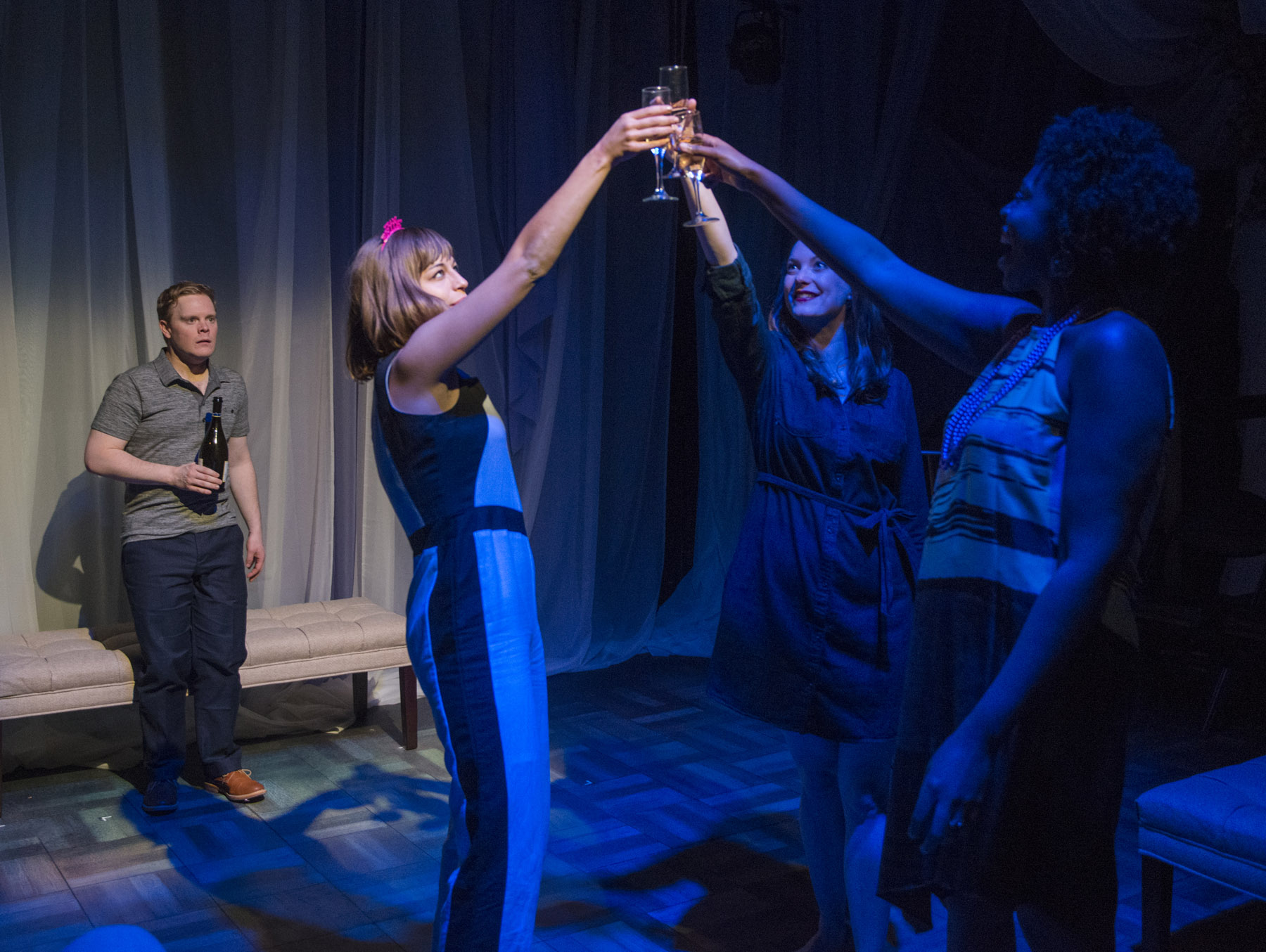 Joshua Harmon (“Bad Jews”) returns with this hilarious and heartwarming (yet melancholy) tale of Jordan Berman: a single gay man in New York City. Between his bittersweet interactions with his best girlfriends and his romantic encounters, Jordan experiences the ups and downs of friendship and singlehood. Harmon also touches on Gay Best Friend archetypes of mainstream media, challenges the role of bridesmaids and highlights the alienation of being a gay man. In her director’s note, Keira Fromm writes that “loneliness is in many ways a precondition of the gay experience. And the prospect of marriage, whether it’s a near or far concept, magnifies the condition.” Harmon delves into the raw, real experience of this archetype and does so with tremendous success.

The set (Jeff Kmiec) is simple and accented with white cloth draped along the ceiling and pink flowers decorating the cloth. The audience sits facing each other on two benches with the stage in between. This makes watching the play even more interactive as audience reactions and character entrances are even more visible. The music selected by sound designer Christopher Kriz for the pre-show and intermission fits the themes of the play perfectly.

The three best friends of Jordan (Alex Weisman) are absolutely delightful: Amanda Drinkall, who plays Laura in the style of Kristin Davis’ charming, kind and soft-spoken Charlotte Goldenblatt on “Sex and the City”; Tiffany Oglesby, a confident yet facially enigmatic Vanessa; and Cassidy Slaughter-Mason as the wildcard socialite Kiki. Fromm’s direction guides the supporting friends and their lovers around Jordan flawlessly; every scene is tight and transitions are made with total understanding.

The show is held up by Weisman and his incredibly funny yet, at times, incredibly sad portrayal of Jordan. He balances the sweetness and kindness of this young gay man while also demonstrating his obsessive tendencies to find love, making the audience roar with laughter at his expressions and antics while tugging at our heartstrings at his loneliness in the world. Scene after scene, he captivates.

In a standout moment, Weisman erupts in a terrific tantrum as he struggles to continue putting on a happy face as each of his friends go onto married life. He struggles to catch his breath after every bitter and desperate line, wrought with guilt and melancholy. Harmon’s script finds a marriage with Weisman’s performance, encapsulating the “joy and terror of looking for love,” as Fromm says in her director’s note. (Danielle Levsky)