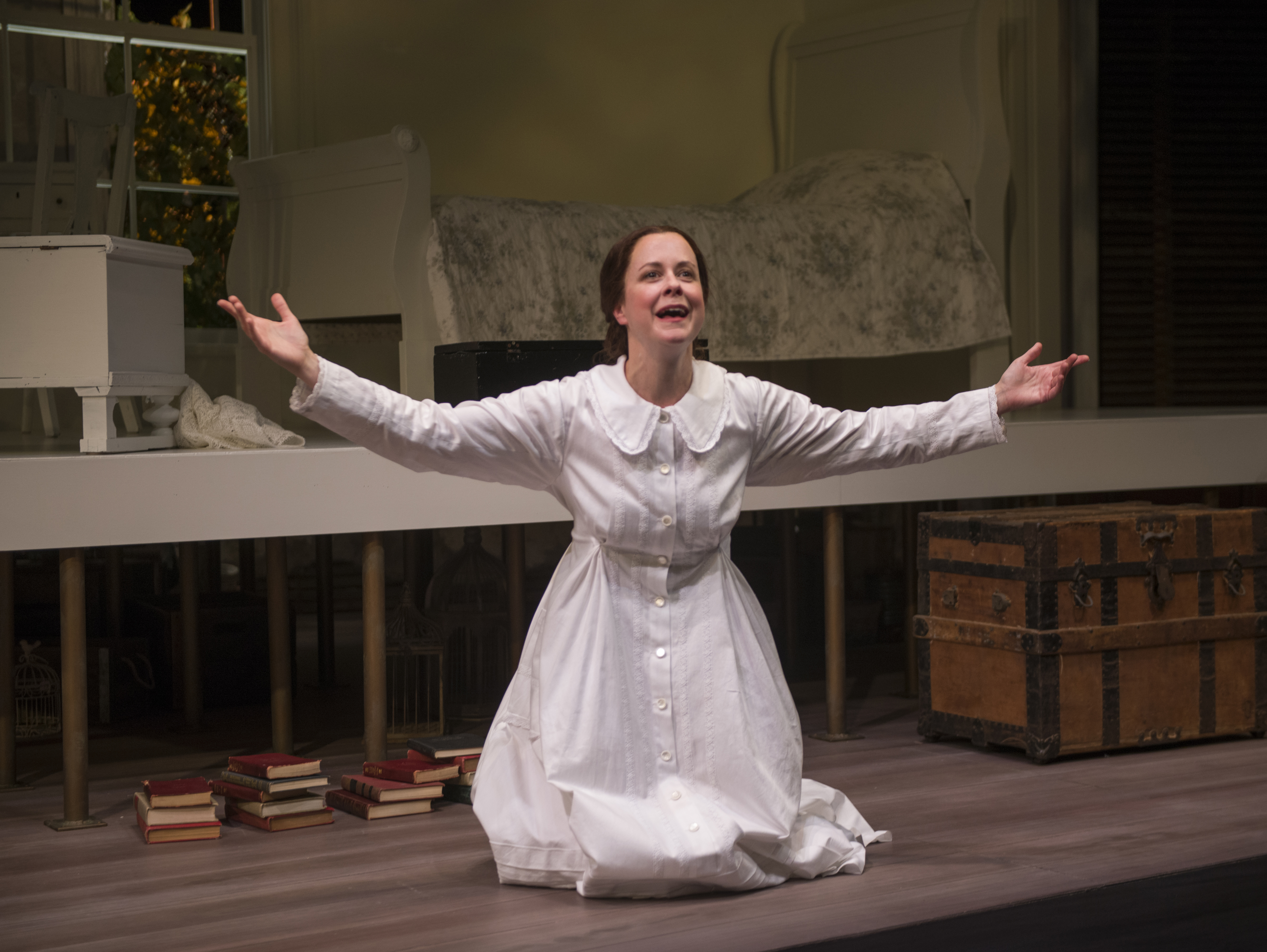 On a hill in Amherst, Massachusetts is a yellow house with an oak tree where once Emily Dickinson lived. It’s a beautiful place, held together by the power of a city that’s deeply proud of the iconic poet who lived there, and a handful of volunteer historians and enthusiasts who give tours of the interior. On one of my several visits I sat outside, petting one of the cats that lives there (in honor of Lavinia, Emily Dickinson’s sister) and I mentioned the 1976 play “The Belle of Amherst” to one of the docents.

She sighed, “It’s not that that play is bad exactly. It’s just that we know so much more now.”

The current production at Court Theatre reverberates with this sensation.

Kate Fry’s performance as Emily is undeniably lovely. She fills the entire theater with her wit, charm and vivacity. The set alone is worth the price of admission (design by Arnel Sancianco). The technical elements all come together to tell a cohesive story though there was a bit with a bunch of house plants getting placed and re-placed that didn’t quite land. All in all “The Belle of Amherst” has all the elements of a fine play and is sure to please the average theater subscriber. But when you look at the bigger picture, you can’t help but ponder the “why” of this production.

If you are intrigued by the life of Emily Dickinson, why produce a play written about her in 1976 when in 2017, as my friendly docent mentions, we know so much more than we did forty-two years ago? If your intent is to, as director Sean Graney states in the program, “[create] an opportunity for a woman to hold space,” why give that space to a heteronormative narrative imposed upon a queer historic figure? Why give that space to a white narrative when you could give that space to a woman of color via either casting a woman of color (if we are going to suspend our disbelief long enough to accept that Emily Dickinson is talking to us through time and space why can’t we suspend it far enough to cast a WOC) or doing a play about a WOC poet? Why not commission one of Chicago’s remarkable playwrights to do a new adaptation of Dickinson’s life that accurately reflects her queerness? If you want to give space to women why grip so tightly to a male narrative imposed upon an iconic female poet by a male playwright in 1976? Why only make space for women who are straight, white, cis and—frankly—have been dead for more than two-hundred years?

If you go to the theater to be comforted by familiar narratives and simple stories then “The Belle of Amherst” should be right up your street. But if you’re looking for the”Glance Into The Complex Life Of Poet Emily Dickinson” that Court Theatre’s marketing department promises, it might behoove you to look elsewhere. (Emma Couling)