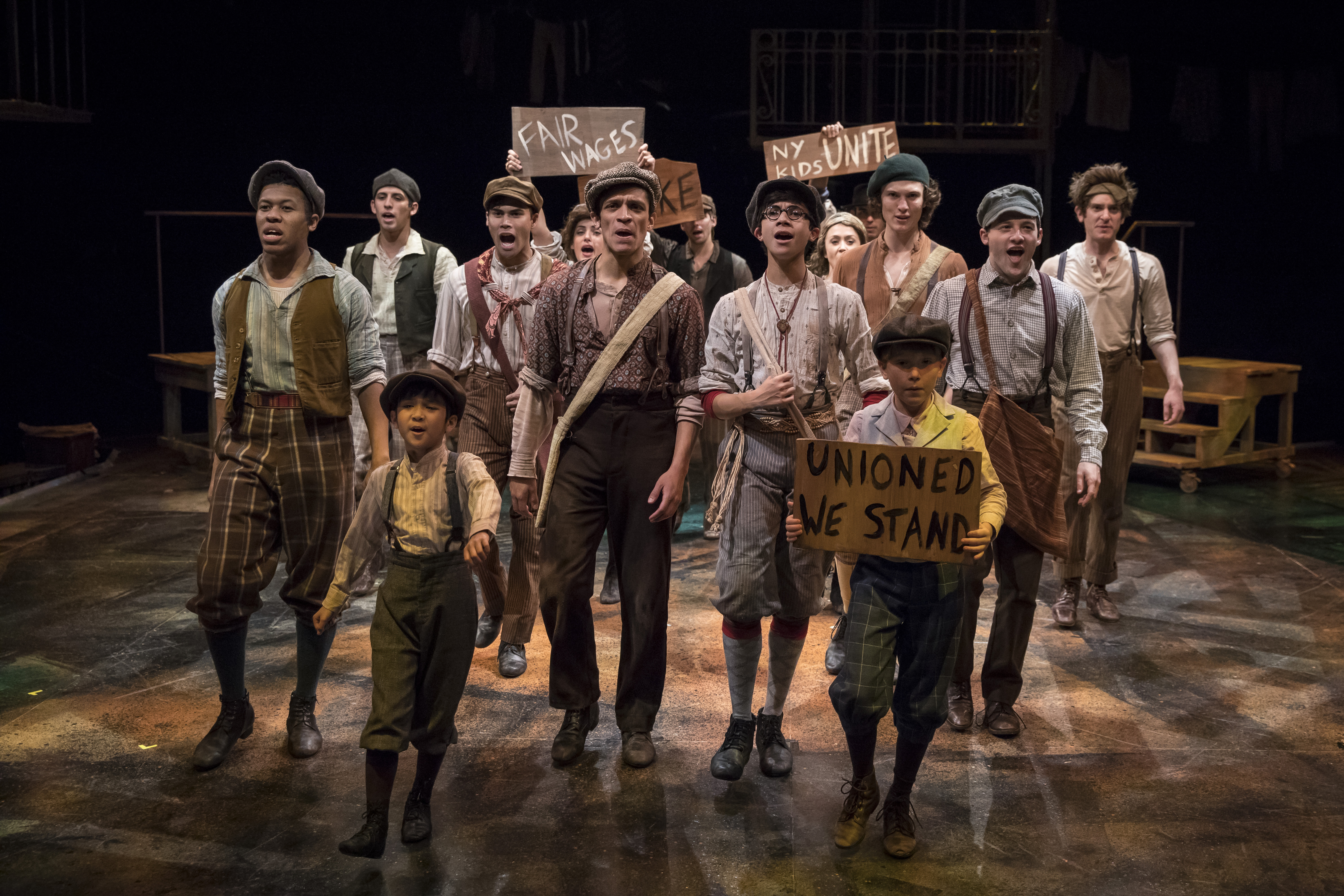 The cast of “Newsies” at Marriott Theatre/Photo: Liz Lauren

When rumors of a stage production of “Newsies” circulated in late 2010, the subset of nineties kids for whom the 1992 Alan Menken movie musical had become a cult classic could not be blamed for thinking that their beloved newsboys would soon fade into obscurity. How very wrong we were. The stage production bell-kicked its way onto Broadway in September of 2011 and collected two Tony Awards that season.

Six years later, Chicago has its own newsies to cheer on—not all of them are boys (to this reviewer’s great satisfaction)—and they’re doing backflips and pirouettes in the round at Marriott Theatre. Even for the most skeptical audience member, it’s hard to be grumpy when faced with director-choreographer Alex Sanchez’ energetic, earnest, youthful and mostly airborne cast of low-key rebels.

“Newsies: The Broadway Musical” is by no means perfect. As with most screen-to-stage Disney adaptations, the songs and content added to this version drag overwhelmingly (the worst offenders being “The Bottom Line,” which misses the mark on what could have been a classic villain song, and “Something to Believe In,” the deeply unnecessary romantic duet that grinds the plot to a total halt right before the climax in act two). But if you find yourself staring at the rafters wondering when the ensemble is going to come back, don’t worry—you won’t be waiting long.

That is the real beauty of this production. Whereas the film and the touring production (which was in Chicago in the winter of 2014) seemed to be star vehicles for the actors in the lead roles, this production’s greatest strength is its ensemble. Go for a bit of hope and sentiment, stay for Nicholas Dantes’ (Specs) dizzying pirouettes, the heartbreaking “Letter from the Refuge” from Matthew Uzarraga’s Crutchie, and all the dancers’ seeming inability to keep their feet on the ground for two seconds.

“Newsies: The Broadway Musical” may not be for everyone. This reviewer is the first to admit that she spent most of the intermission trying to explain its cult-like following to her theater companion. But if you’re looking for a small ray of hope—a room where a group of young people truly believe that with enough organizing, enough determination and enough joy they can change the world—then treat yourself to a small repast from the news of today.

But if you are one of those nineties kids who loved the movie first, be warned: they’ve changed a lot of the lyrics. (Emma Couling)