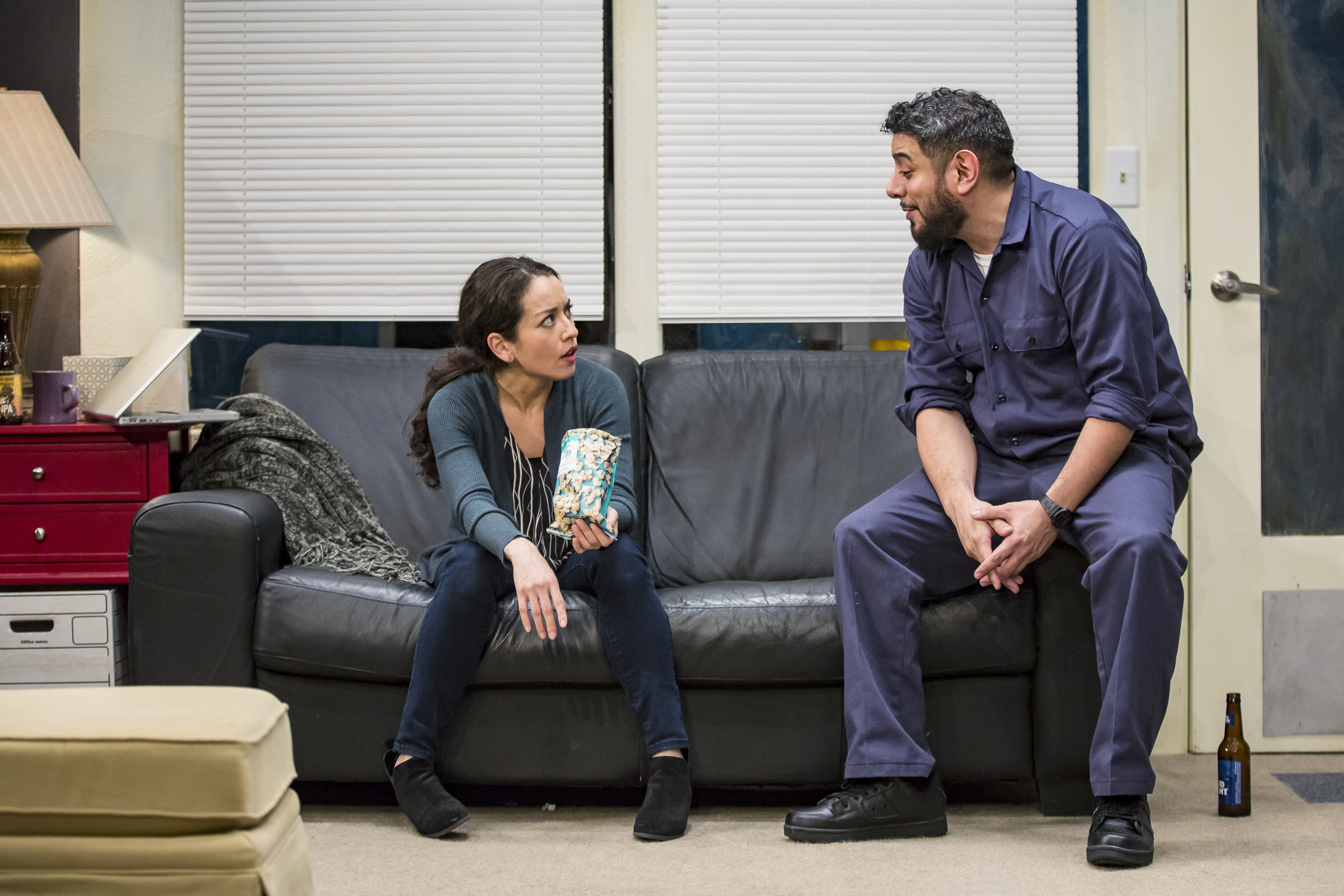 There’s a curious Möbius strip quality—a twisted circularity—to “Fade,” enjoying its local premiere at Victory Gardens in a co-production with Teatro Vista. Playwright Tanya Saracho, herself a Mexican-American television writer, has written a play about a Chicana novelist-turned-television writer seeking to write a convincing Latin-tinged TV script—a play that itself sometimes resembles a telenovela episode. The two-person show raises potentially interesting issues about racial stereotypes and sensitivities, showbiz “ethics,” fictional authenticity and, especially, the connection between status and identity in a corporate rat-race environment. But the piece’s dramatic bite and force are compromised (until the very end) by TV-style shtick as author, director and performer conspire unsuccessfully to make us like and identify with a protagonist who, in a more honest play, would be treated as a figure of satirical fun or an out-and-out rotter.

The story, which takes place in designer Regina García’s expressively inexpressive film-studio-office setting, concerns the quest of Lucia (Sari Sanchez) to achieve two goals that verge on the mutually exclusive: to succeed in the cutthroat Hollywood writing game and to preserve her self-respect as an artist and human being. Complicating the situation is her gender and immigrant background, which leave her vulnerable to the indignities of her never-seen Anglo employer, who uses her to relay orders to his non-English-speaking maid. Her only ally is the Mexican-American janitor Abel, who is from a different social class than the “fresa” (i.e., privileged) Lucia, but who shares her culture and is possessed of a solidity and decency that her backbiting co-workers lack—as does the self-absorbed, furtively ruthless Lucia. As they begin to bond, the blocked, insecure Lucia listens to his hard-luck stories first sympathetically and then opportunistically, as a source of boss-pleasing plot thickeners.

Eddie Martinez is outstanding as Abel, the prematurely world-weary survivor whose life revolves around his young daughter. Less satisfying is the performance of Sanchez, who gives us a seminar in full-spectrum overacting. Her combination of vibrating anxiety, cartoonishly exaggerated reactions and oft-screechy delivery contrasts oddly with Martinez’s restrained, interiorized portrayal. It’s as though they’re in two different productions, with one actor doing Method-style psychological realism, the other over-the-top farce. Director Sandra Marquez’s failure to dial Sanchez down is not easily understood or forgiven. Neither actor is helped by the dialogue, a combination of furious interjections and gratuitous f-bombs reminiscent of David Mamet at his macho worst. I don’t know exactly what newbie Latina screenwriters eager to make an impression sound like but I’d bet all the residuals in Hollywood it’s not like this.

“Fade” is a West Coast play that, with its highly specific reference to LA geography and entertainment industry follies, doesn’t travel particularly well. What almost but not quite redeems the evening is the final scene, an unsentimental, non-histrionic moment of truth that is quick, clean and cold as ice. It shows what Saracho, Marquez and company are capable of when they stop toying with and “entertaining” us and simply cut to the chase. (Hugh Iglarsh)